Researchers and volunteers in a three-week project headed by the Xerces Society for Invertebrate Conservation are now counting the Western monarch population at overwintering sites along the California coast.

It all began Saturday. An unofficial count estimates more than 50,000 monarchs are there. That's a huge increase from the fewer than 2000 tally last winter.

An Associated Press story this week indicated that the monarch population is "bouncing back."

How many overwintering sites are there along the California coast? About 100. "One of the best-known wintering places is the Monarch Grove Sanctuary, a city-owned site in the coastal city of Pacific Grove, where last year no monarch butterflies showed up," the Associated Press reported.

"This year a preliminary count showed more than 13,000 monarchs have arrived at the site in Monterey County, clustering together on pine, cypress and eucalyptus trees and sparking hope among the grove's volunteers and visitors that the struggling insects can bounce back."

"It was well-received but we had technical problems towards the end," he related on his Facebook page, Monarch Butterflies in the Pacific Northwest. "Gail Morris kindly allowed me to re-record it and you can now find it at the link below. My view of the future of western monarchs is more optimistic than some other monarch researchers. Much of this is based on my research on monarch physiology and ecology conducted 40+ years ago in Sydney, Australia, which showed monarchs well able to adapt to a different environment. I think we are seeing this now in the western US in real time! My thoughts on this are contained within the webinar. The recovery in population numbers at overwintering sites this fall, is not surprising to me but I am surprised at some of the large numbers coming in from various sites. I will take a look at some of the sites over the next few days and will report back here." 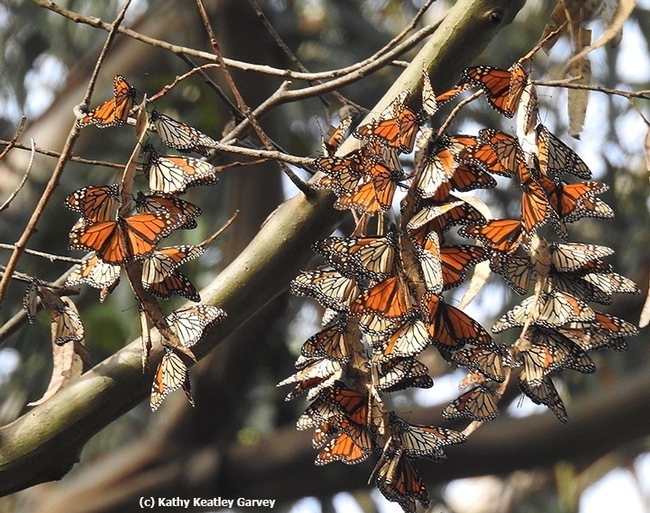