The ivory-billed woodpecker is thought to be extinct. This specimen is in the Harvard Museum of Comparative Zoology. (Photo by Fran Keller)
This is the story about an entomologist, a rhino, a woodpecker and E. O. Wilson.

Back in May of 2005, entomologist Fran Keller, a professor at Folsom Lake College and a UC Davis doctoral alumnus,  interviewed E. O. Wilson for a presentation at the 2005 Entomological Society of America meeting in Fort Lauderdale, Fla.

This week remembrances are pouring in for Wilson, the legendary Harvard emeritus professor, biologist, naturalist and author who died Dec. 26 at age 92 in Burlington, Mass.  (See UC Davis tributes on the Department of Entomology and Nematology website.)

Recognized as one of the world's most influential scientists, Wilson was known as “The Ant Man,” "The Father of Sociobiology," "The Father of Diversity" and “The Modern-Day Darwin," for his pioneering and trailblazing work that drew global admiration and won scores of scientific awards.

But among his peers, colleagues and mentees, he was known as "Ed."

"Our department of entomology helped  fund my trip to Harvard,” Keller recalled, “and he agreed to meet me over the course of two days in May 2005. The ESA symposium took place in mid-December. I recorded our interview on a cassette tape,” she said, adding she hopes to publish it in a journal.

“We walked around the MCZ (Harvard Museum of Comparative Zoology) for a bit together, talking about species discovery, biodiversity and extinction,” she recalled. “We stopped at the display of birds and the ivory-billed woodpecker. We stopped at Darwin's finches on display. We went into the room where the rhinos were displayed and as we stared together at the rhinos, silent, I couldn't help myself and I began to cry.  I apologized for my emotional display and said ‘It just makes me horribly sad that I may never get to see this animal in the wild, that it may be lost forever. I'm an entomologist, I don't know why this rhino makes me so sad. I didn't cry in front of the ivory-billed woodpecker.” This rhino specimen at the Harvard Museum of Comparative Zoology drew an emotional response from entomologist Fran Keller. "It just makes me horribly sad that I may never get to see this animal in the wild, that it may be lost forever," she told E. O. Wilson. (Photo by Fran Keller)
Wilson responded: “Everyone has an animal that reaches them or that they connect with at some level, even though you were born an entomologist, perhaps yours is the rhino.”

“After my interview with Ed, I bought the book in the MCZ, The Rarest of the Rare:  Stories Behind the Treasues at the Harvard Museum of Natural History. In that book, it highlights the extinct and rare species held in the MCZ collections. One of those specimens is the last Xerces butterfly, which was caught by Harry Lange (UC Davis emeritus professor of entomology). Harry's quote in that book, ‘I didn't know it was the last one, I thought there would be more' and then my time eating lunch and then wandering the MCZ collection and chatting with Ed inspired me to create the Xerces t-shirt for the Bohart Museum of Entomology.”

One of Keller's mentors, Tom Schoener, studied with Wilson.  “I worked on plant ecology and island biogeography for my undergrad research (Sacramento City College)," she said, "and continued that for awhile in grad school (UC Davis). Ed Wilson was one of the founders of island biogeography.”  And, as a undergraduate at Sacramento City College, Keller was part of a field trip to hear Wilson speak at his 2002 book tour on The Future of Life.

Wilson's work, On Human Nature, won the Pulitzer Prize in 1979. He won a second Pulitzer in 1991 with The Ants, co-authored with colleague Bert Hölldobler.  In 1990, the Royal Swedish Academy of Sciences awarded Wilson the Crafoord Prize in biosciences, the highest scientific award in the field. In 1996, Time magazine named him one of America's 25 most influential people. In  1977 President Jimmy Carter awarded him the National Medal of Science for his contributions toward the advancement of knowledge in biology.

Wilson, according to reports, always considered himself an Alabaman who went to Harvard, rather than a Harvard professor born in Alabama. Born June 10, 1929 in Birmingham, Ed graduated from the University of Alabama in 1949 with two degrees in biology, and received his doctorate in biology from Harvard in 1955. He joined the Harvard faculty in 1956. Although officially retiring in 1996, he remained active as an emeritus professor and honorary curator until his death. 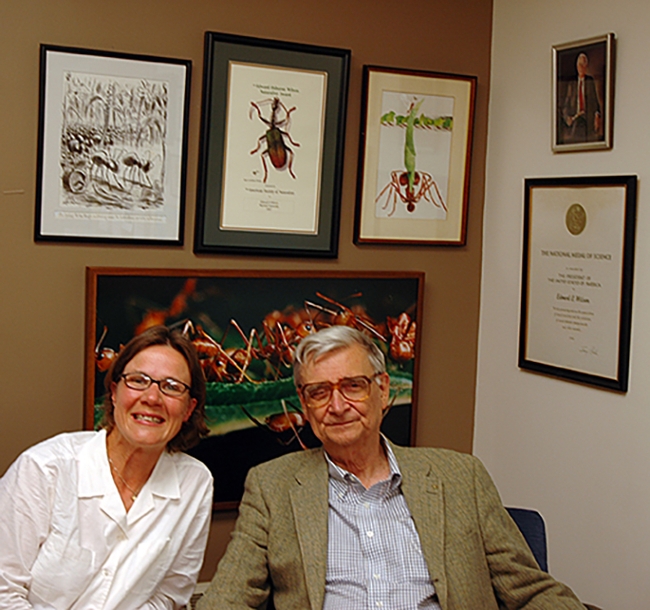