Bug Squad
sitenum=63
Happenings in the insect world
Game On! Find and Photograph the First Bumble Bee of the Year UC Davis pollinator specialist Robbin Thorp (1933-2019) with two of the books he co-authored in 2014. (Photo by Kathy Keatley Garvey)
Game on!

If you're thinking about taking a walk in Yolo or Solano counties to celebrate the new year--or just to get some exercise in keeping with your New Year's Resolution (you did make one, didn't you?)--bring your camera.

You might find and photograph the first bumble bee of the year in a contest sponsored by the Bohart Museum of Entomology and memorializing bumble bee expert Robbin Thorp (1933-2019), UC Davis distinguished emeritus professor of entomology.

Participants are to capture an image of a bumble bee in the wild in either of the two counties and email the image to bmuseum@ucdavis.edu, with the details of time, date and place. The image must be recognizable as a bumble bee, said contest coordinator Lynn Kimsey, director of the Bohart Museum and a UC Davis distinguished professor of entomology.

The first bumble bee to emerge in this area is the black-tailed bumble bee, Bombus melanopygus, according to Thorp, who co-authored Bumble Bees of North America: An Identification Guide (Princeton University) and California Bees and Blooms: A Guide for Gardeners and Naturalists (Heyday).

Thorp launched the first unofficial bumble-bee-of-the-year contest several years ago with a small group of bumble bee enthusiasts/photographers: Allan Jones and Gary Zamzow of Yolo County, and yours truly of Solano County.  Kim Chacon, then a UC Davis doctoral candidate and a Thorp protégé, joined us later. She is a 2019 alumnus of The Bee Course (co-taught by Thorp from 2002-2018). The nine-day intensive workshop, geared for conservation biologists and pollination ecologists and considered the world's premiere native bee biology and taxonomic course, takes place annually in Portal, Ariz. at the Southwestern Research Station, part of the American Museum of Natural History, N.Y. Charlie Casey Nicholson, the 2021 winner.
So, Thorp, Jones, Zamzow, Garvey and Chacon. Five pairs of eyes, five camera lenses and what fun to seek the first bumble bee of the year for bragging rights.  Most of us made a bee-line for the early blooming manzanita in the UC Davis Arboretum and Public Garden. Nicholson photographed B. melanopygus, in a manzanita patch at 3:10 p.m., Thursday, Jan. 14, 2021 in the UC Davis Arboretum and Public Garden to claim the honor. He is a researcher in the UC Davis Department of Entomology and Nematology labs of Professor Neal Williams, a pollination ecologist, and Extension apiculturist Elina Lastro Niño.

The 2022 winner also will receive that prized coffee cup.

So, take a walk. Invite your camera.  Keep that New Year's Resolution. 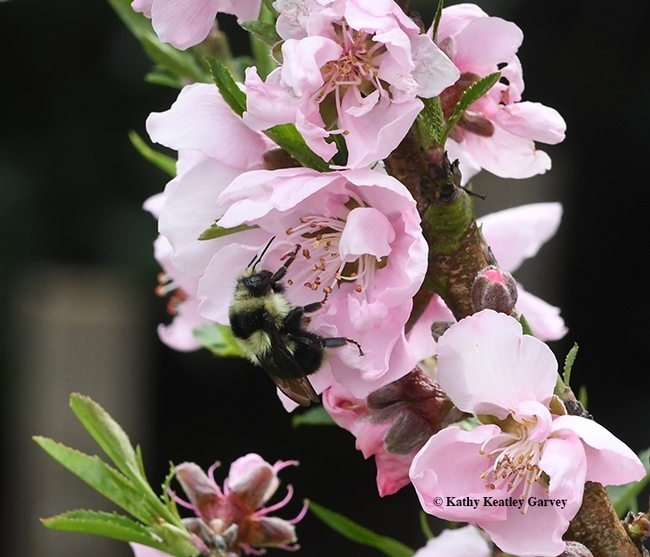