Marek Borowiec (Photo courtesy of the University of Idaho)
The work of legendary E. O. Wilson (June 10, 1929 – Dec. 26, 2021) influenced so many students to begin the scientific study of ants (myrmecology).

UC Davis doctoral alumnus Marek Borowiec, now an assistant professor in the University of Idaho's Department of Entomology, Plant Pathology and Nematology, is one of many who drew inspiration from Wilson, the Pulitzer-Prize winning biologist considered "the" global expert on ants.

As a master's student from Poland on a Ernst Mayr grant,  Borowiec worked near his office at Harvard's Museum of Comparative Zoology (MCZ). E. O. Wilson (Photo courtesy of Wikipedia)
In response, PhD student Stephanie Eskew, lamented: "I always hoped to meet him someday. An inspiration for many an entomologist!"

Borowiec received his doctorate at UC Davis in 2016, studying with major professor and myrmecologist Phil Ward.

"My focus has been primarily on ant diversity and evolution and in my research I combine field work, morphology, molecular phylogenetics and comparative methods," Borowiec writes on his website. "I am also interested in computing and phylogeny estimation from high-throughput sequencing data. Ants are the world's most successful eusocial organisms. Long history, high species diversity and extreme variety of life histories make them an excellent group in which many evolutionary questions can be addressed." 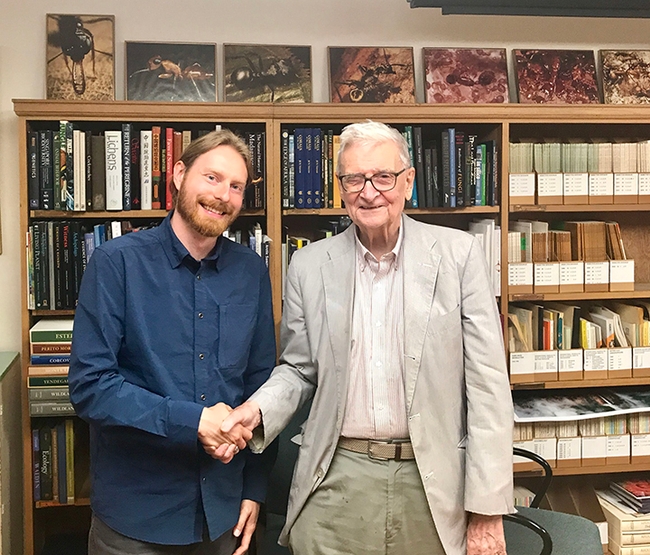 Marek Borowiec (left) shakes hands with E. O. Wilson at the Harvard Museum of Comparative Zoology (MCZ). Borowiec went on to receive his doctorate in entomology from UC Davis and is now an assistant professor at the University of Idaho.
Focus Area Tags: Economic Development, Environment, Innovation, Natural Resources
Tags: ants (31), E. O. Wilson (4), Marek Borowiec (5), Phil Ward (28), UC Davis Department of Entomology and Nematology (616), University of Idaho (3)
Comments: 2
Comments:
by Bob Archer
on January 6, 2022 at 11:56 AM
Such inspirational comments. A fascinating overture to the “history” of ants.
Thank you for sharing.
P.S. Although entomology was not my major nor even minor, following one class, it became my favorite elective due to professors Stevker and Edwards.
by Diane Virdee
on January 6, 2022 at 12:10 PM
I’m inspired to read some of E.O. Wilson’s works.
Leave a Reply: