Have you ever stopped to admire a blossom and seen forceps protruding?

We were walking near Mrak Hall, UC Davis, on a hot summery afternoon and spotted a tell-tale sign: abdominal forceps, aka pinchers or pincers.

We unfolded the blossom and an earwig crawled out. "Female earwig," said Lynn Kimsey, director of the Bohart Museum of Entomology and professor of entomology at UC Davis. "Young female earwig."

In a male earwig, the forceps are more widely spaced.

The most abundant earwig in California is the European eartwig, Forficula auricularia (family Forficulidae), according to entomologists Jerry Powell and Charles Hogue in their book, California Insects. However, it was not known in the state until 1923.

They describe the adult as about 12 to 22mm long, mostly brown with pale forewings and antennae. "The immatures and adults feed on a wide variety of substances, from flowers and green foliage near the ground to living and dead insects, including aphids."

This one seemed to be escaping from the heat. 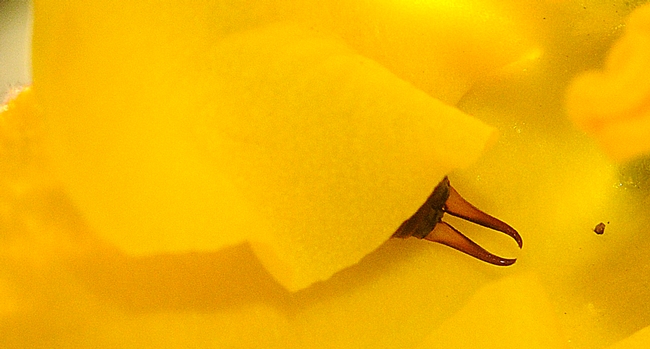 Tell-tale sign of an earwig. (Photo by Kathy Keatley Garvey) 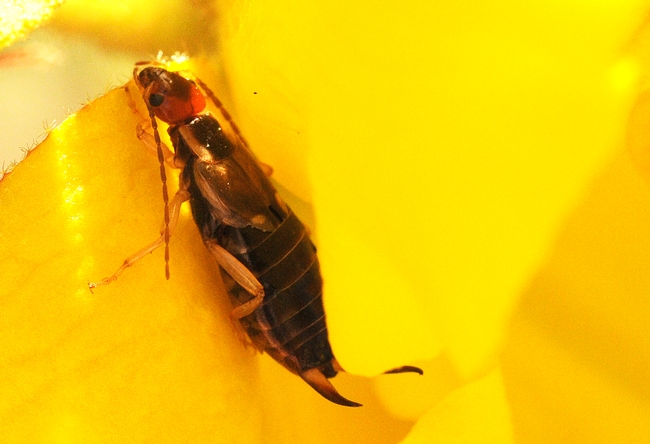