Severyn Korneyev as a doctoral student in Ukraine.
When officials at the Bohart Museum of Entomology asked UC Davis students, graduate students and postdoctoral fellows if they would like to create a scientific traveling display case of insect specimens, one of those answering the call was postdoctoral researcher Severyn Korneyev, a Ukrainian entomologist who studies flies.

“Severyn asked if he could create the fly display case in the Ukrainian colors of blue and gold,” said Lynn Kimsey, director of the Bohart Museum and a UC Davis distinguished professor of entomology. "Of course!" she told him.

Korneyev, a researcher with the National Academy of Sciences of Ukraine, Department of General and Applied Entomology, Kyiv, Ukraine, accepted a joint postdoctoral position with the UC Davis Department of Entomology and the California Department of Food and Agriculture (CDFA) in September 2020. He joined the Kimsey lab and the Stephen Gaimari (CDFA) lab.

His fly diversity display was one of three newly created traveling display cases that the Bohart Museum showcased at its open house on April 23 during the 108th annual UC Davis Picnic Day.  (Emma Jochim, a graduate student in the Jason Bond lab, and Megan Ma, an undergraduate student in the Bond lab, crafted a display on California spiders. Marissa Sandoval and Regina Fairbanks, both graduate students in Population Biology, focused on "Ants as Farmers.") Flag of Ukraine
In his display case, Korneyev explains: "The order Diptera includes all flies and mosquitoes.  More than 150,000 species from 150 different families are described and many more are still unknown to mankind." He displayed specimens from several families of flies "to show the diversity of this outstanding group."

"Flies is one of the major insect orders with considerable ecological and human importance," he wrote. "Flies are important pollinators. Fruit flies are used as model organisms in research and have significant impact on agriculture. Flies and mosquitoes are vectors for diseases: malaria, dengue, yellow fever, human sleeping sickness and animal trypanosomiasis."

A member of the Ukrainian Entomological Society and the Entomological Society of America, Korneyev specializes in the systematics and taxonomy of the true fruit flies (Diptera: Tephritidae). His expertise includes morphological and molecular diagnostics, collection management, and the field collecting of insects.

Korneyev is the lead author of "Phylogeny of the Genus Tephritis Latreille, 1804 (Diptera: Tephritidae)," published in May 2020 in Arthropod Systematics and Phylogeny.  Gaimari is one of the co-authors.

Korneyev holds a doctorate in entomology (2016) from the I.I.Schmalhausen Institute of Zoology, National Academy of Sciences of Ukraine. He received both his bachelor's degree and his master's degree in zoology, with honors, from Taras Shevchenko National University of Kyiv.

Korneyev served as a 2017-2018 Fulbright scholar with the Research and Development Program. Michigan State University, East Lansing. He speaks his native tongue, Ukrainian, as well as English and Russian.

Korneyev said today that "my family members in Ukraine are Ok, and my parents are in Germany.  His parents had been trapped in Kyiv. "They were hiding in the metro. Later I convinced them to move out of the city."

The war is horrendous, he said. "Mariupol is almost like Sacramento and it was turned to dust."

"There is an official website to help the Ukrainian military," he said, adding that it is at:
https://bank.gov.ua/en/news/all/natsionalniy-bank-vidkriv-spetsrahunok-dlya-zboru-koshtiv-na-potrebi-armiyi

"And a non-governmental fund to help the Ukrainian military. https://savelife.in.ua/en/donate/" 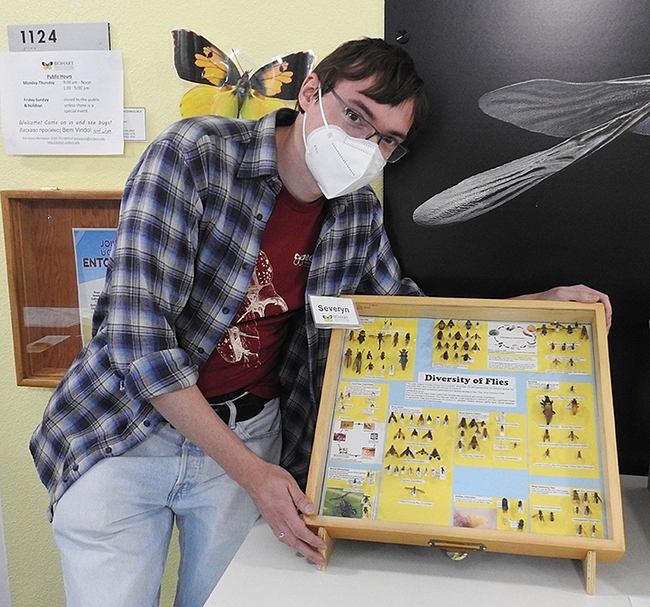 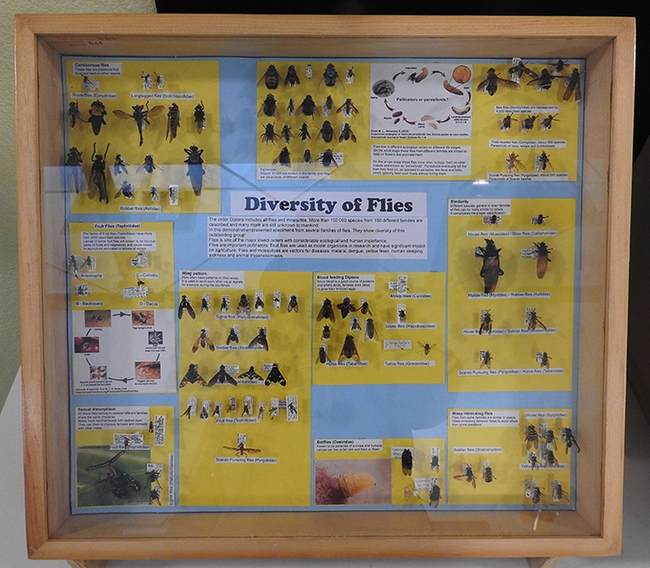 This is Severyn Korneyev's fly diversity display showcased at the Bohart Museum of Entomology during the UC Davis Picnic Day. (Photo by Kathy Keatley Garvey) 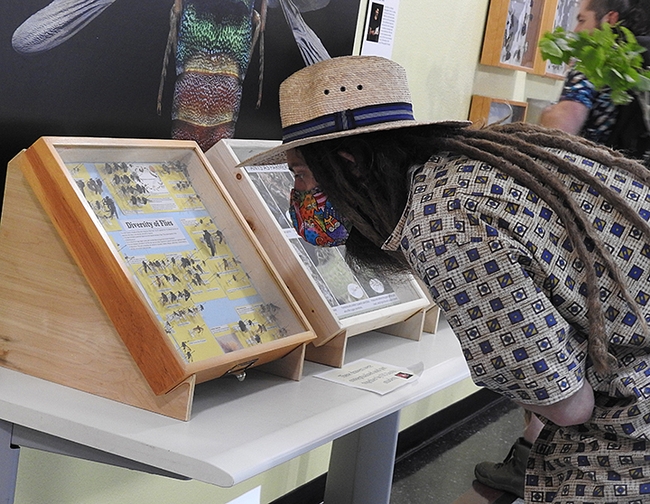 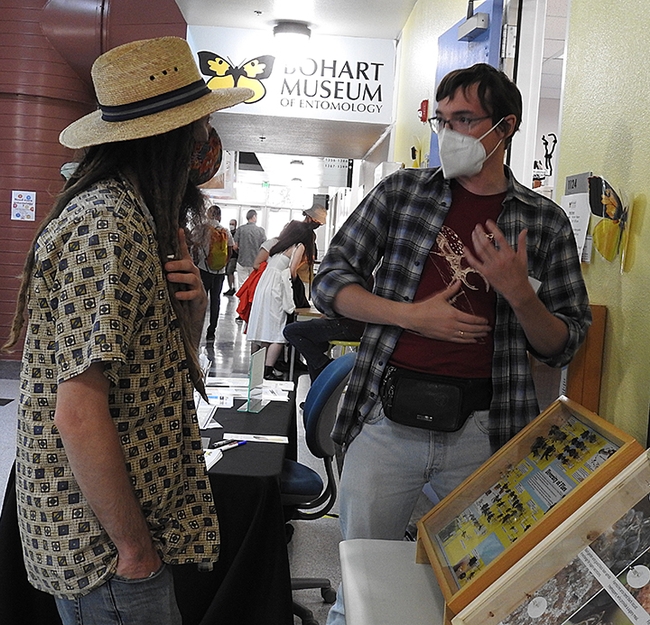