UCANR: Promoting economic prosperity in California
Can hay from alfalfa seed production fields be fed to livestock after seed harvest?

A question came up from a rancher/farmer about grazing alfalfa seed production fields after seed harvest. Can one safely turn livestock onto alfalfa seed fields or cut and bale the hay for feed after harvesting the seed?

Yes, with the following considerations:

1)    Watch for Chemical Residues.  Some of the currently registered chemicals used in alfalfa seed production for pest control and desiccation restrict treated plant material from entering the food chain. Be sure to read the pesticide label before allowing livestock to graze or feed on alfalfa hay after a seed crop harvest.  For example, alfalfa treated with Reglone, a diquat based desiccant, cannot be used for grazing, or fed to livestock as forage, and the seeds harvested from treated plants cannot be used for food, feed, or oil purposes.

2)    Weed Impacts? Livestock can introduce weed seeds that pass through their gut or fall off their hair or wool that could impact alfalfa seed production. Certified alfalfa seed requires intensive management practices to ensure seed purity for seed certification. Dodder is of particular concern when grazing alfalfa seed fields, since dodder is a very difficult weed to control, and not allowed in certified seed production. Keep in mind that when bringing livestock into seed fields, many types of hay can be a potential source of weeds seeds to the alfalfa seed crop.  Alternative feeds with low-weed seed risk include commodity grains, almond hulls, and many other crop byproducts that might be fed to livestock before bringing them onto seed fields.

3)    Grazing or Baling?  Alfalfa residue after seed harvest can be baled and removed or grazing sheep can be brought in to clean up the debris after harvest (providing no prohibited chemical residues are used). Grazing alfalfa fields is a common practice in many areas of the world like Argentina where dairy cow milk and beef production systems are based primarily on grazing alfalfa. The primary concerns in grazing alfalfa include animal health, with issues of bloat, and alfalfa stand health. Some common practices for managing bloat include grazing mature alfalfa (when protein levels decline, and fiber goes up making it safer for eating) and pre-feeding before grazing so hungry cows do not overfeed on lush alfalfa stands.  For stand health, avoid putting livestock out on wet fields and rotate herds through the fields to avoid overgrazing.

4)    What about Forage Quality?  After seed harvest, alfalfa is mature, below leaf content, and course stemmed. Grazing this overly-mature alfalfa after seed harvest is generally low risk for grazing since the stems and leaves are so mature.  For a full discussion of grazing alfalfa, see the chapter on grazing alfalfa linked here: https://alfalfa.ucdavis.edu/IrrigatedAlfalfa/.

For the specific field in question, can the rancher/farmer turn cows onto his alfalfa seed field? The seed field in question was 18% crude protein, 32% ADF, and 40% NDF, putting it in the ‘Fair' category for hay quality, so generally a low risk for grazing. However, in this case, the cows were moved off rangeland into the harvested seed crop.  Given they were hungry for high quality feed, it's advised to 1) Fill them up on grass or other non-legume hay before putting them on alfalfa, and 2) Only leave them in the alfalfa fields for short durations. In the Imperial Valley, Bermuda grass, Sudangrass, and Kleingrass (can cause photosensitization and liver damage in horses, sheep, and goats) are commonly grown grasses that can be used to fill livestock before grazing alfalfa. If your livestock are experienced alfalfa grazers, they can likely self-regulate safe levels of alfalfa intake if presented with alternative feeds while grazing the alfalfa field.  Keep in mind that many types of hay can be a potential source of weeds seeds to the alfalfa seed crop.  Alternative feeds with low-weed seed risk include commodity grains, almond hulls and many other crop byproducts.

In 2021, there were about 25,000 acres of alfalfa grown for seed (18,000 ac certified, 7,000 ac non-certified) in California with over 90% of the production acreage in the Imperial Valley of California. These are mostly non-dormant varieties. For seed fields, typically several premium cuts are made for hay for dairy cow feed prior to seed harvest to get the crop uniform and set for seed production.  After seed set, the fields dry down (mostly naturally) and then are either direct combined or cut and windrowed, then threshed. Removal of hay after harvest improves the efficacy of soil-active herbicides, helps control some insect pests, brings income to the grower, and allows for optimum timing of the crop production season.  Thus, integration of both seed and forage production is an important way to improve profitability especially when there's a critical need for feed. 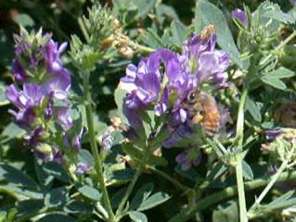 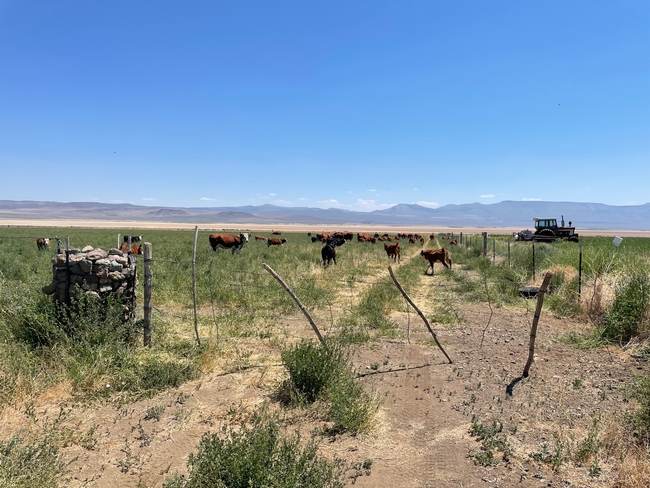