Last weekend we visited a Fort Bragg nursery specializing in succulents, and these "little white bees" were all over the red flowering thyme (Thymus serphyllum).

Not bees, though.  Wasps.

But both in the order Hymenoptera.

Being a wasp, it's a predator and a carnivore, not a vegetarian like the honey bee. It preys upon flies, hover flies (aka flower flies or syrphids), tachinid flies, lacewings, and other critters, taking the carcasses back to its ground nest to feed its larvae.

Bug Guide indicates that North America is home to 19 species of sand wasps.

This one (below) seemed to be sipping nectar (adults feed on nectar).

Probably a "matter of thyme" before it nailed a fly. 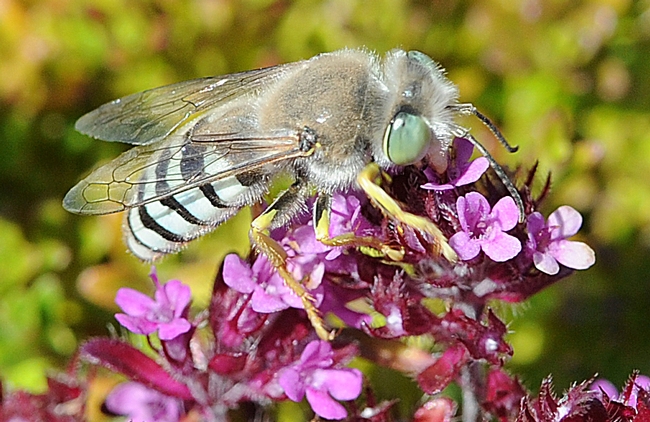 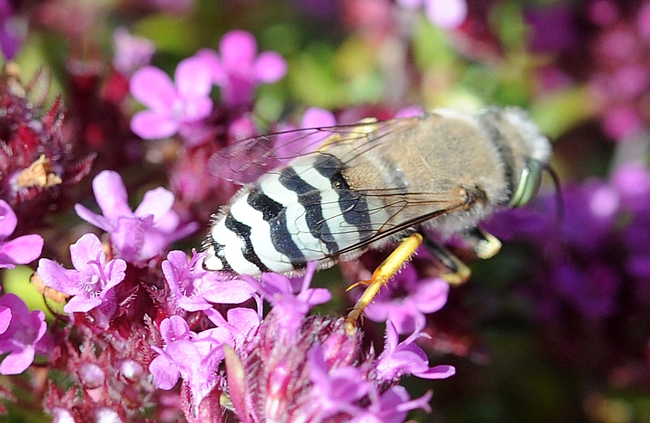 Abdomen of sand wasp: note the black and white curvy stripes. (Photo by Kathy Keatley Garvey)
Tags: Bembix (1), Robbin Thorp (267), sand wasp (3), Thyme (1), Thymus serphyllum (1)
Comments: 2
Comments:
by Redbirdgirl
on June 6, 2019 at 11:23 AM
Thank you so much for this valuable information. We just observed one attempting to dig a hole in the park sandbox here in Austin TX. We thought at first it might be a "rogue" honey bee. Now we've learned it was a sand wasp! --RG
by Tamara Morton
on August 2, 2020 at 7:14 AM
Visited Fort Bragg yesterday and snapped a shot of them. Was very curious what it was. They were everywhere.
Leave a Reply: