Eric Mussen in 2019
A celebration of life for celebrated Cooperative Extension apiculturist emeritus Eric Mussen, an internationally known 38-year California Cooperative Extension apiculturist and an invaluable member of the UC Davis Department of Entomology and Nematology faculty, will take place from 4 to 6 p.m., Sunday, Aug. 28 in the Putah Creek Lodge, UC Davis campus.

Family, friends, colleagues and associates are RSVP'ing at https://ericmussencelebrationofli.rsvpify.com. The deadline to register is Aug. 1. There also will be a webinar where folks can attend virtually. The celebration of life also will be posted on YouTube. The virtual project (see the link on the RSVP site) is the work of Davis distinguished professor Walter Leal of the Department of Molecular and Cellular Biology, a former chair of the Department of Entomology.

Eric joined the UC Davis entomology department on July 1, 1976. Although he retired in 2014, he continued his many activities until a few weeks prior to his death. For nearly four decades, he drew praise as “the honey bee guru,” “the pulse of the bee industry" and as "the go-to person" when consumers, scientists, researchers, students, and the news media sought answers about honey bees.

Born May 12, 1944 in Schenectady, N.Y., Eric received his bachelor's degree in entomology from the University of Massachusetts (after declining an offer to play football at Harvard) and then obtained his master's degree and doctorate in entomology from the University of Minnesota in 1969 and 1975, respectively. Mussen credits his grandfather with sparking his interest in insects. His grandfather, a self-taught naturalist, would take his young grandson to the woods to point out flora and fauna. Bees became his life, and Eric thoroughly enjoyed his career. For nearly four decades, he wrote and published the bimonthly newsletter, from the UC Apiaries, and short, topical articles called Bee Briefs, providing beekeepers with practical information on all aspects of beekeeping.  His research focused on managing honey bees and wild bees for maximum field production, while minimizing pesticide damage to pollinator populations.

Gene Brandi, the 2018 president of the American Beekeeping Federation,  remembers presenting him with the prestigious Founders' Award from the Foundation for the Preservation of Honey Bees at the 75th annual American Beekeeping Federation conference in Reno in 2018. "Eric received a well-deserved rousing standing ovation!” said Brandi, extolling him as "an outstanding liaison between the academic world of apiculture and real-world beekeeping and crop pollination."

"Eric was a legend in the beekeeping world who was always willing to go the extra mile to help beekeepers and bee industry organizations deal with issues pertaining to honey bee health, regulations, and various threats to the industry," Brandi said. "He also helped agricultural organizations, government officials, and the general public better understand the value of honey bees to the world. Eric was a great advocate for the honey bee and beekeepers. He was truly a national treasure.

"Eric served on the California State Beekeepers Association Board of Directors for 39 years as apiculturist, but he also was the parliamentarian for many years, and due to his long tenure, was quite the historian as well," Brandi added. "He co-founded the Western Apicultural Society and served as president for six terms. He founded the American Association of Professional Apiculturists and was either president of secretary/treasurer for the first ten years."

"In addition to his work with the aforementioned organizations, Eric was the UC Honey Bee Liaison to California Department of Food and Agriculture,  California Department of Pesticide Regulation, EPA, California Farm Bureau Federation, Almond Board of California, National Honey Board, California Bee Breeders' Association, and others. Eric was always willing to help the beekeeping industry by testifying at hearings or writing letters to support the bee industry on various issues. He received many awards from a number of organizations, but the ones with which I am most familiar are the California State Beekeepers Association Distinguished Service Award as well as the Beekeeper of the Year Award.  The Foundation for the Preservation of Honey Bees honored Eric in 2018 with the coveted Founders; Award.

Brandi related that "Eric also conducted a number of research projects over the years including research on  sacbrood virus, effects of medfly sprays on honey bees, effects of antibiotics of honey bee brood, potential of Neem as a varroa control, effects of selected fungicides on honey bee brood,  effects of antibiotics, and effects of  high-fructose corn syrup on packaged bee development. Eric's "From the UC Apiaries" newsletter was a renowned publication which contained valuable information about current events in the beekeeping world which beekeepers needed to know. There is so much more that can be said about Eric and his many contributions to the beekeeping world."

When Mussen was nominated (and received) the 2013-14 Distinguished Service Award for Outstanding Extension from the UC Agriculture and Natural Resources (UC ANR), MacArthur Genus Awardee Professor Marla Spivak, Distinguished McKnight University Professor Apiculture/Social Insects at the University of Minnesota, wrote:  "Without question, Eric is the No. 1 Extension person dealing with honey bees in the nation, if not the world. Research colleagues, beekeepers and the public are all very lucky to have him.” 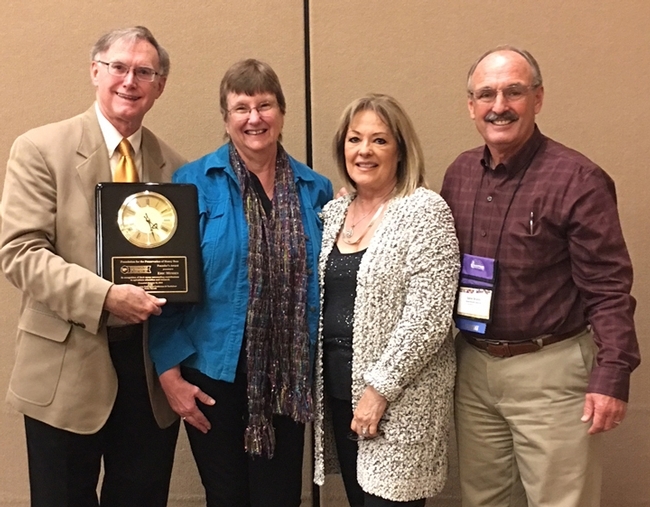 Eric Mussen (far left) received the prestigious Founders' Award from the Foundation for the Preservation of Honey Bees at the 75th annual American Beekeeping Federation conference in Reno in 2018. With him are his wife, Helen, and close friends Christine and Gene Brandi of Los Banos. Gene, the 2018 president of the American Beekeeping Federation, presented him with the award.
Focus Area Tags: Agriculture, Environment, Innovation
Tags: celebration of life (6), Eric Mussen (256), Extension apiculturist (9), Gene Brandi (5), honey bees (402), UC Davis Department of Entomology and Nematology (591)
Comments: 0
No Comments Posted.
Leave a Reply: