One of the arachnid activities at the open house. (Photo by Kathy Keatley Garvey)
Arachnids rule!

The Bohart Museum of Entomology open house, "Eight-Legged Encounters,"  co-sponsored by the American Arachnological Society  (AAS) and held June 25 in the Academic Surge Building, drew more than 250 attendees and 40 volunteers.

"It was an absolutely amazing event!" said arachnologist Jason Bond of UC Davis, co-host of the AAS meeting.

"We were pleased to see such a large turnout from the community but even more so delighted to see so many young people," said Bond, associate dean, UC Davis College of Agricultural and Environmental Sciences, and professor and  the Evert and Marion Schlinger Chair in Insect Systematics, UC Davis Department of Entomology and Nematology. "There were over 40 volunteer arachnologists representing a national and international contingent of expertise. While we couldn't have done it without them, they also contributed a tremendous amount of expertise, excitement, and energy to the event." Doctoral student Xavier Zahnle of the Bond lab answers questions at the open house. (Photo by Kathy Keatley Garvey)
"Dr. Eileen Hebets of the University of Nebraska, Lincoln (UNL), has designed an amazing program; the College of Agricultural and Environmental Sciences, Department of Entomology and Nematology, and Bohart Museum of Entomology,  are grateful that she was willing to share this with us," Bond said.

Hebets, the Charles Bessey Professor at UNL and president of the Animal Behavior Society,  co-hosted the open house as part of a U.S. National Science Foundation grant, “Eight-Legged Encounters” that she developed as an outreach project to connect arachnologists with communities, especially youth. (See her website).

Some 20 activity tables lined the hallway of the Academic Surge Building.

"Our Eight-Legged Encounters event at the UC Davis Bohart Museum far exceeded our expectations!" said Professor Hebets. "It was an incredibly successful event, with well over 250 attendees and more then 40 volunteers, many of which were graduate students and post-doctoral researchers from across the country and world. There is no doubt it was a life-changing experience for some of our young attendees as well as some of the student volunteers. I am so very thankful for the help and support we received from the Bohart Museum and from Dr. Jason Bond and his laboratory. It could not have happened without them."

Bond co-hosted the AAS conference, held June 26-30 on the UC Davis campus, with Lisa Chamberland, postdoctoral research associate of the Bond lab, and Joel Ledford, assistant professor of teaching, Department of Plant Biology, College of Biological Sciences. Chamberland coordinated the spider-species naming project with second-year doctoral student Emma Jochim of the Bond lab and incoming doctoral student Iris Bright, who starts this fall.  No winner has yet been announced. A scientist explains her arachnid project as "if I were a kid again." (Photo by Kathy Keatley Garvey)
Preceding the open house, Tabatha Yang, education and outreach coordinator for the Bohart Museum, had asked "spider scientists"  to write a one-page report about their research "as if they were kids again."

Some of the displays: 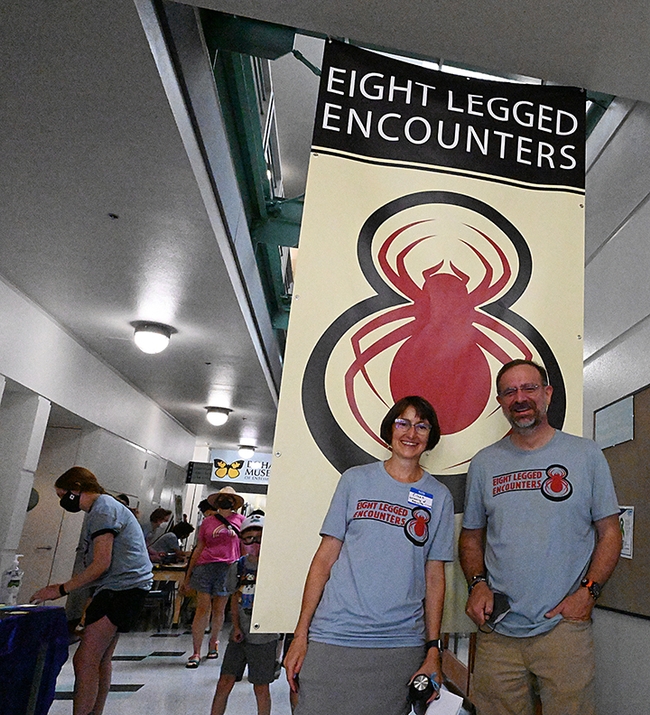 Associate Dean Jason Bond of UC Davis and Professor Eileen Hebets of the University of Nebraska, Lincoln, at the "Eight Legged Encounters" open house, hosted by the Bohart Museum of Entomology and the American Arachnological Society. (Photo by Kathy Keatley Garvey) 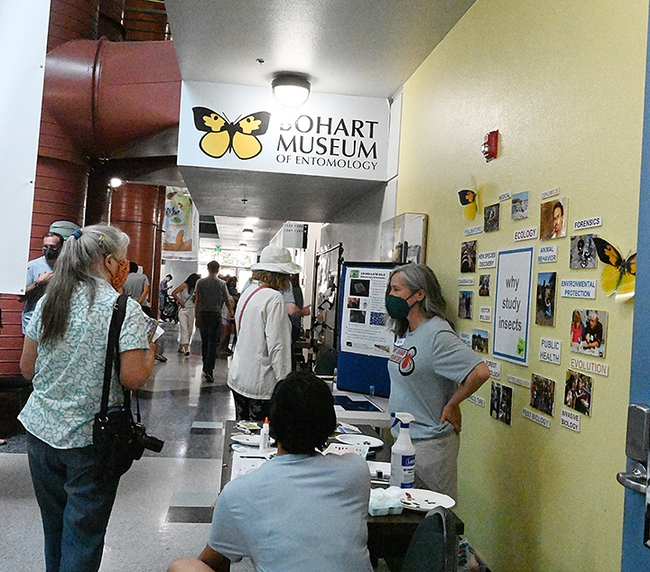 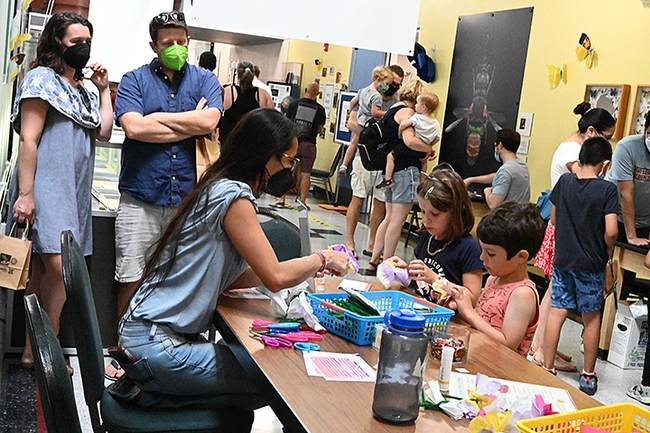 Activity tables at the Bohart Museum of Entomology/AAS open house stayed busy throughout the event. (Photo by Kathy Keatley Garvey) 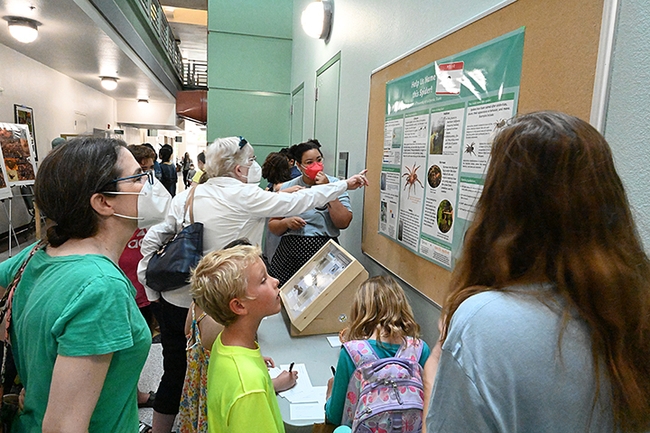 Iris Bright (blue shirt, far right) and Lisa Chamberland (foreground) of the Bond lab discuss trapdoor spiders and urge visitors to suggest a name for a new species. Bright will be a first-year doctoral student in the fall and Chamberland is a postdoctoral research associate. (Photo by Kathy Keatley Garvey) 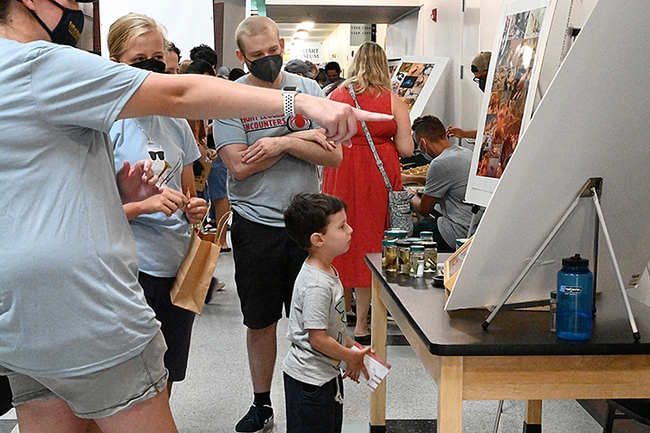 Shaked Hoffman, 5, of Davis, listens to the arachnid dialogue. His mother Iael Raij-Hoffman, is a postdoctoral scholar at UC Davis Department of Land, Air and Water Resources. (Photo by Kathy Keatley Garvey) 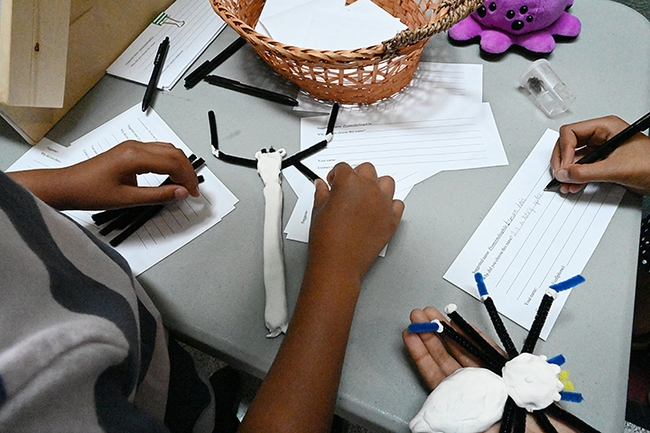 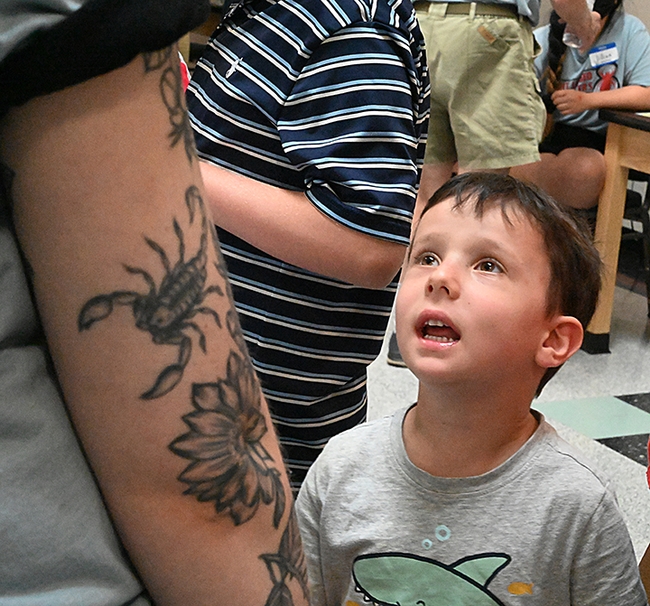 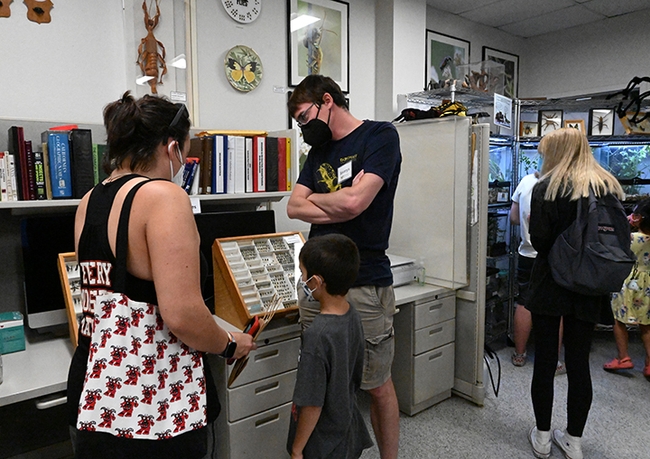