Richard "Rick" Karban, UC Davis distinguished professor of entomology, studies them. The rest of us admire them.

We usually see them in the spring along the cliffs of Bodega Head on the Sonoma coast. They're reddish brown in the center and black on both ends.

Some folks say they're winter weather predictors. Not! We do, however, see them curl into a bristly ball when they sense danger.

"As with most folklore, there are 2 other versions to this story," NWS acknowledges. "The first one says that the woolly bear caterpillar's coat will indicate the upcoming winter's severity.  So, if its coat is very woolly, it will be a cold winter.  The final version deals with the woolly bear caterpillar's direction of travel of the worms.  It is said that woolly bear's crawling in a southerly direction are trying to escape the cold winter conditions of the north.  On the other hand, woolly bear's crawling on a northward path would indicate a mild winter."

If you attend the Bohart Museum of Entomology Moth Night at UC Davis, you'll see specimens of the adults--the tiger moths, Platyprepia virginalis. They're sometimes called the "Ranchman's Tiger Moth." They are boldly marked, like a tiger. (Who says moths are drab-looking?)

The Bohart is celebrating National Moth Night from 8 p.m. to 11 p.m. on Saturday, July 30: both (1) indoors in Room 1124 of the Academic Surge Building, 455 Crocker Lane, UC Davis campus, and (2) outdoors, by the blacklighting display, within a short walking distance.

Indoors you'll see the Bohart's global collection of moths, and outside, you'll see moths and other insects hanging on a white sheet in the blacklighting display. They are drawn there by an ultraviolet (UV) light.

The open house is free, family friendly and open to the public. A craft activity is planned and refreshments (hot cocoa and cookies) will be served, says Tabatha Yang, education and outreach coordinator. 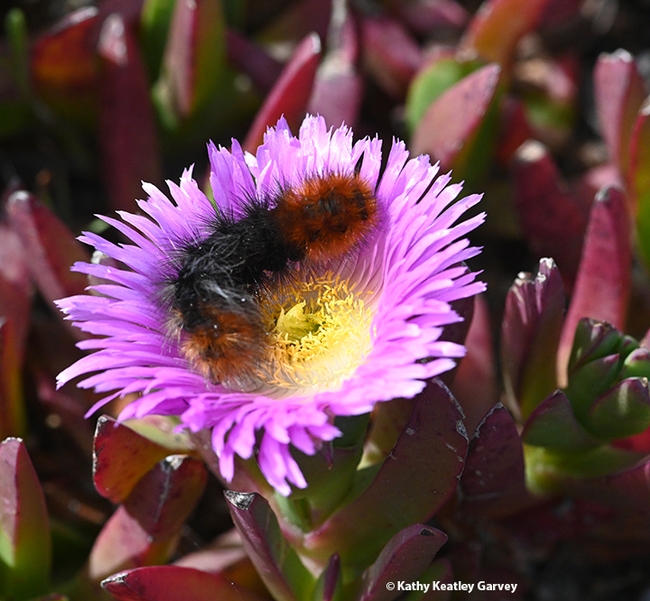 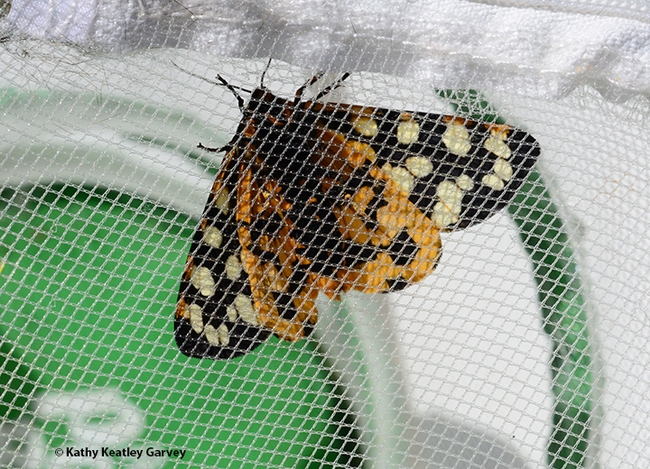 The woolly bear caterpillar becomes a tiger moth, Platyprepia virginalis. (Photo by Kathy Keatley Garvey)
Focus Area Tags: Environment, Innovation, Natural Resources
Tags: Bohart Museum of Entomology (514), Moth Night (21), Platyprepia virginalis (4), Rick Karban (15), tiger moth (1), woolly bear caterpillar (2)
Comments: 1
Comments:
by Kathy Klobas
on August 2, 2022 at 8:21 PM
I used to find these in our Walnut Creek hills quite a bit, when I was a kid! I loved making them crawl on my hand and curl into a ball. Thanks for the memory!
Leave a Reply: