A funny thing happened on the way from El Cerrito to UC Davis on Friday, Aug. 1.

And it wasn't even Friday the 13th.

At 7 a.m., a group of UC Davis employees approached their commuter van in an El Cerrito parking lot. But, after glancing at the passenger side, they weren't at all sure they wanted to board.

What to do? Knowing about colony collapse disorder and the declining bee population, they didn't want to hurt them. So they climbed in the van via the driver's side and circled the block, hoping the bees would disperse. They didn't.

In an un-bee-lievable sight, the white van, accompanied by the bees and their queen, buzzed to the UC campus on a 60-mile freeway ride.

When the vehicle pulled into the Shields parking lot shortly before 8 a.m., so did a long line of bees hanging around the door frame.

“We lost most of them along the way,” said vanpool driver Keir Reavie, head of the Biological and Agriculture Sciences Department at Shields Library.

How did the survivors survive?

“Some bees must have slipped inside the door frame and held on to the others by linking legs,” said UC Davis apiculturist Eric Mussen. “The queen bee was probably inside the crack.”

Lynn Kimsey, professor and chair of the Department of Entomology and director of the Bohart Museum of Entomology, noticed the bees on the van when she pedaled over to Shields Library early Friday afternoon.

She alerted Mussen. But he already knew about them.

Reavie had earlier emailed him, asking what to do.

Mussen recommended that they leave them alone or contact a beekeeper on campus or in El Cerrito to vacuum off the swarm. “The bees in a swarm usually won't bother you unless they are significantly disturbed,” he said.

Meanwhile, the social insects spent the day on campus, periodically leaving the van for food and water, while others—the scouts—searched campus buildings for a new home. Some bees parked on the “Van Pool Parking Only” sign and the motorcycle permit parking sign.

At least one bee casualty occurred in the Shields parking lot: a bee flew into a nearby spider's web. When Mussen arrived at the site, the spider was feasting on the web-wrapped bee. A taste of honey.

What happened to the bees? "I was not able to contact the person Eric suggested on Friday afternoon, so nobody came to take the bees," Reavie said. " When I returned to the van at 5 p.m., most of the bees had left, but there was still a large group on the passenger side rear view mirror. Some of these dispersed on the trip back to El Cerrito and the few remained were gone when I checked on the van Saturday afternoon."

As for the UC Davis commuter van, it's now “the bee mobile."

Let's hear it for our "unstung heroes." 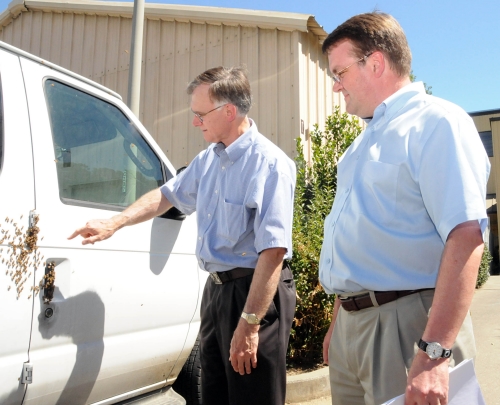 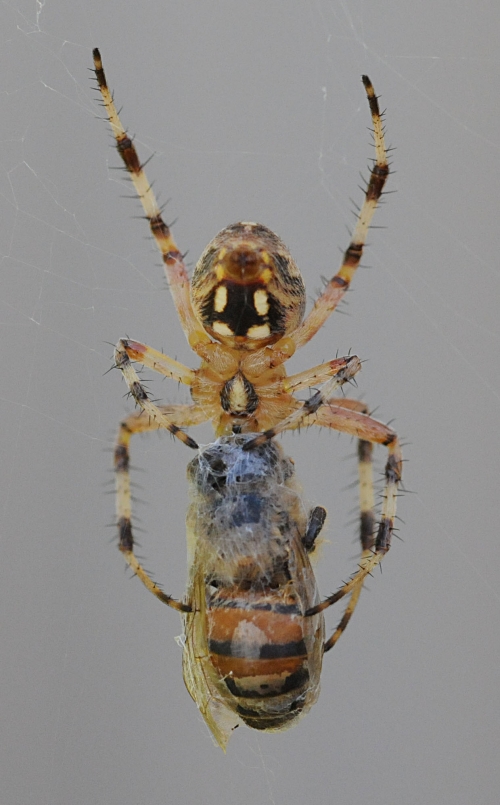 A spider in the Shields Library parking lot feasts on an El Cerrito bee. (Photo by Kathy Keatley Garvey) 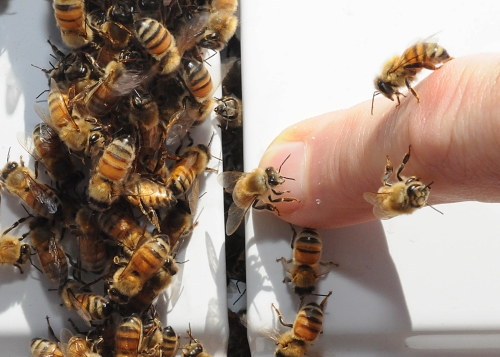