Bug Squad
sitenum=63
Happenings in the insect world
Identity Crisis: When a Honey Bee Is NOT a Honey Bee If honey bees could talk, they would be "BEE-wildered" at all the bee emojis out there that don't resemble them.

"Hey, buddy! That's not me! That's not what I look like! You sketched my anatomy all wrong!"

Should we BEE alarmed at the taxonomy fail of one of the world's most recognizable insects?

A honey bee, as bee scientists and beekeepers will tell you, is a winged insect with three body parts: a head, thorax and abdomen. The head has two antennae and the thorax has six legs. There are two pairs of wings.  Only females have stingers. The stingers do NOT resemble hypodermic needles.

So, honey bee enthusiasts, if you've ever thought about what bee emoji to use, not to worry. You're now "BEE-holden" to the Royal Zoological Society of Scotland (RZSS) and Dr. Helen Taylor, the RZSS's highly talented conservation programme manager.

Dr. Taylor has analyzed the emojis being used in social media. And the results are not only buzzworthy but un-BEE-lievably funny.

The project originated when RZSS related the difficulty of finding the most anatomically correct bee emoji,  and asked Dr. Taylor to "tell us which one is the bees knees."

RZSS, known as the wildlife conservation charity that owns Edinburgh Zoo and Highland Wildlife Park, tweeted the results  in a graphic on Aug. 16.

Some of the Dr. Taylor's responses:

The Apple bee emoji? "Floats like a butterfly, stings like a...dagger-wielding stripy ninja? Heavily armed or not, with only one set of wings instead of the normal two, it's not going to get very far. Bonus points for segmented legs. 6/10."

The Google emoji? "Cute, but obviously been in a tragic accident leaving it with only one set of wings and missing a pair of legs. Still had time to apply stylish lippy tho. 4/10" (Note: "lippy" is lipstick)

Twitter? "It's official--Twitter pulls the legs off insects. All. The. Legs. This rotund bee is doomed to fly around forever (or roll--only one pair of wings...) never putting its non-existent feet on the ground... 3/10"

WhatsApp? "Another tragically injured bee with only four legs, two wings and a hypodermic needle lodged in its butt. What can't these apps just give bees a chance? 5/10."

Read more of her get-to-the-point analysis in the graphic below and the comments on the RZSS Twitter feed that include:

Dr. Taylor, a self-described conservation field scientist and geneticist and outdoors adventurer, joined RZSS in April 2019. "I am currently responsible for managing the conservation breeding programmes for pine hoverflies and pond mud snails, the native biodiversity programme at Highland Wildlife Park and our relationship with the Institute for the Conservation of Wild Animals in Brazil," she writes on her website.

"I also managed the reintroduced population of beavers in Knapdale Forest up to completion of the Scottish Beavers project at the end of 2020. I continue to remain involved in beaver conservation in Scotland via the Scottish Beaver Forum."

Helen holds a bachelor's degree, with honors, in natural sciences (2003) from Clare College, Cambridge University, UK; a master's degree in conservation, with distinction (2011), from the Manchester Metropolitan University, UK,  and a doctorate in ecology and biodiversity (2014) from Victoria University of Wellington, New Zealand.

"I love getting out in the field and working with wildlife, conducting research that is useful for conservation management and that moves the field forwards," she adds.

BEE-lieve it. Dr. Helen Taylor could also launch a side career in comedy that would move that field forward, too. 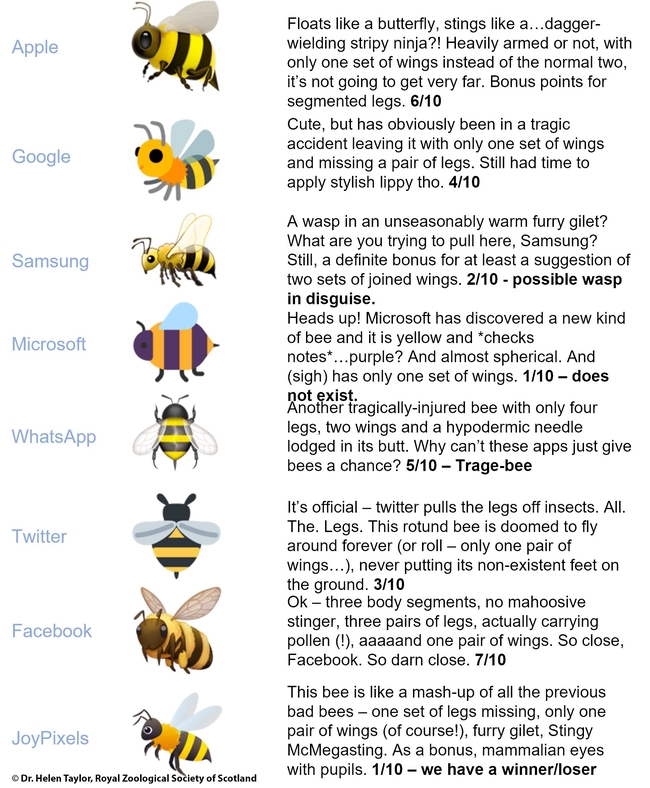 This is how Dr. Helen Taylor, conservation programme manager for the Royal Zoological Society of Scotland, described the various bee emojis. 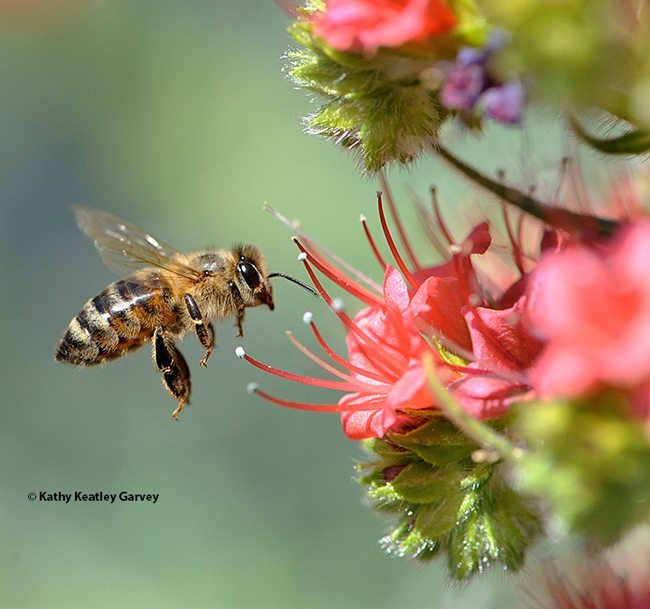