All year long, we've been waiting for those majestic monarchs to visit our pollinator garden in Vacaville, as they have in the past 10 years or so. One year (2020), they deposited more than 300 eggs on our milkweed.

Nothing has fluttered in and out except the Western tiger swallowtails, Gulf Fritillaries, fiery and common-checkered skippers, cabbage whites, buckeyes, mourning cloaks, and gray hairstreaks.

The milkweed grew, blossomed and went to seed. Ditto the Mexican sunflowers (Tithonia rotundifola). But the patch of Mexican petunia (Ruellia brittoniana) is thriving. The plant is a plucky perennial with purple, petunia-like flowers.

Purple, the color of royalty...a place where a monarch can reign supreme.

And that's exactly what happened today in the petunia patch at 3 p.m. A monarch fluttered in and sipped a little nectar. I almost missed it, as I was observing the Gulf Fritillary activity around the passionflower vine--the males chasing the females, the females laying eggs on the tendrils and leaves, and caterpillars munching the leaves.

The monarch didn't stay long, and I was too far way to move closer, but the Nikon Z-7 with its 105mm macro lens and its 45.7 megapixels, let me know that it was, indeed, one of those majestic monarchs we've been missing.

Washington State University entomologist and monarch researcher David James was right. On Aug. 31, he said I'd be seeing monarchs in a few weeks as they're leaving the Pacific Northwest (PNW) on their way to their overwintering sites along the California coast.  (See Sept. 2 Bug Squad blog)

"The numbers we are seeing in the PNW this summer are consistent with numbers I've seen in summers past when theoverwintering population was approximately 250,000 as it was last winter," he related Aug. 31. "Last summer (2021) I verified approximately 60 Monarch sightings in the PNW. This summer, I have had approximately 500 verified reports. So, I think we have seen an 8-10 fold increase in Monarch numbers this summer in the PNW.  The majority have been in Oregon, followed by Idaho, Washington and British Columbia. There are also positive reports of good numbers of Monarchs in Utah, Nevada and eastern California."

Now, maybe we'll see another tagged traveler like the one we photographed in 2016. The scenario: One of his citizen scientists, Steve Anderson of Ashland, Ore., tagged a male monarch on Aug. 28, 2016 that stopped for nectar in our Vacaville pollinator garden on Sept. 5, 2016.  The tag read  “Monarch@wsu.edu A6093."  It hung around for five hours. (See Bug Squad blog and WSU news story)

"So, assuming it didn't travel much on the day you saw it, it flew 285 miles in 7 days or about 40.7 miles per day," James told us back in 2016. "Pretty amazing. So, I doubt he broke his journey for much more than the five hours you watched him--he could be 100 miles further south by now."

Meanwhile, watch for monarchs! What to do if you see a WSU-tagged monarch? Photograph it, if you can, and contact David James at david_james@wsu.edu or the PNW Facebook page.  Also, report any Monarch sightings to iNaturalist and Journey North. 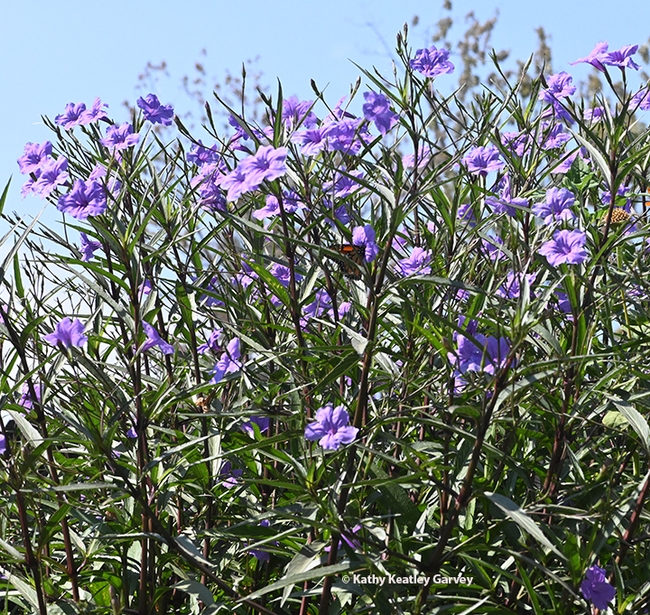 Find the monarch! A monarch stopped to nectar in a Mexican petunia patch Sept. 15 in a Vacaville pollinator garden. (Photo by Kathy Keatley Garvey) 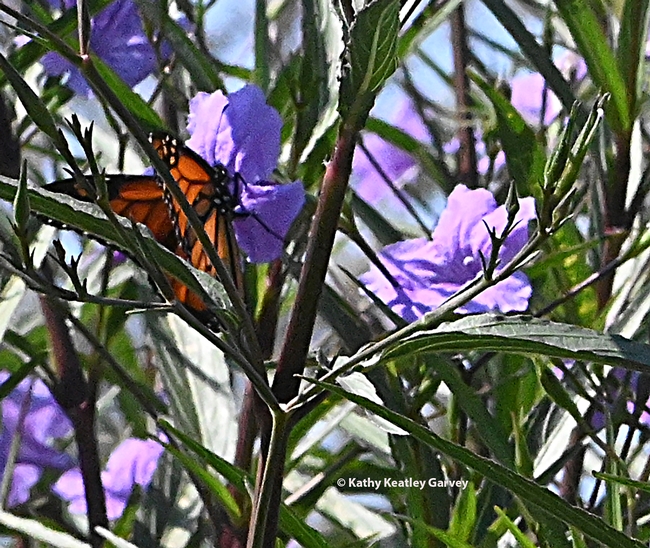