But there he was, the familiar golden bee with green eyes, robbing nectar from a Mexican petunia, Ruellia simplex, in a Vacaville, Calif., garden.

"Nectar robbing" occurs when a bee bypasses the pollination process and "cheats" by entering a flower from the outside to steal the nectar. This one proved to be a good robber, as he buzzed from blossom to blossom to drill holes in the corolla and sip the nectar.

This is the bee that the late Robbin Thorp, distinguished emeritus professor, UC Davis Department of Entomology and Nematology, called "the teddy bear bee." It looks fluffy and cuddly and it doesn't sting. Or as Thorp used to say, "Boy bees don't sting." Often he would show a newly collected male Valley carpenter bee to youngsters at a Bohart Museum of Entomology open house (in the spring) and encourage them to hold him. You could see the utter delight on their faces.

Valley carpenter bees are a perfect example of sexual dimorphism. The females are solid black and the males are golden with green eyes. (See more information about wild bees in the book California Bees and Blooms: A Guide for Gardeners and Naturalists by University of California-affiliated authors Gordon Frankie, Robbin Thorp, Rollin  Coville, and Barbara Ertter.)

As Thorp told us several years ago for a news story: This Valley carpenter bee (formerly known as as Xylocopa varipuncta) "occurs in the Central Valley and southern California, Arizona, New Mexico and southward through Mexico.  It is large (about the size of a queen bumble bee), with all black females and golden/buff-colored males with green eyes.  Females have dark wings with violet reflections."?

Some folks think it's a pest. It's not. It's a pollinator.

And if you spot a male in October, just call it "Mr. October."  Baseball Hall of Famer Reggie Jackson probably wouldn't mind. 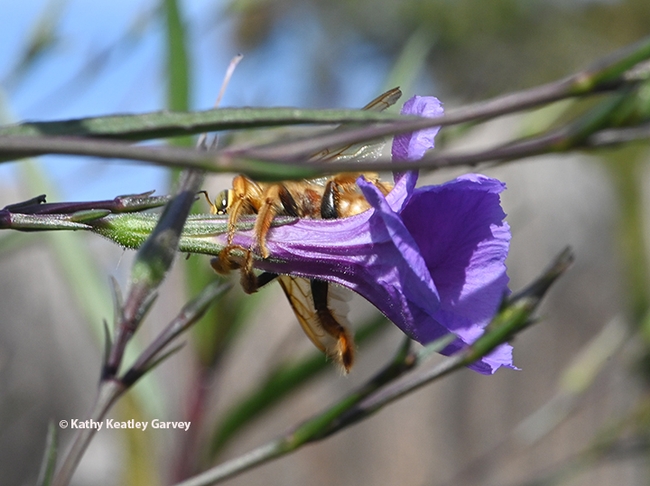 A male Valley carpenter bee, Xylocopa sonorina, engages in nectar robbing by drilling a hole in the corolla of the Mexican petunia to steal the nectar. (Photo by Kathy Keatley Garvey) 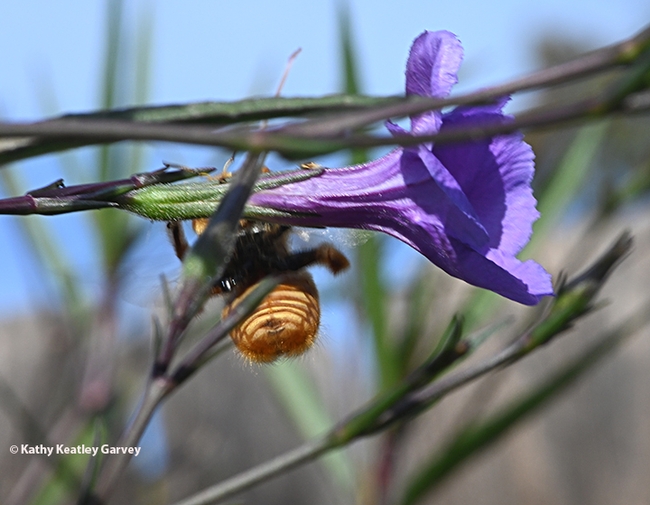 This male Valley carpenter bee, or "the teddy bear bee," wiggles to reach the nectar of a Mexican petunia. (Photo by Kathy Keatley Garvey) 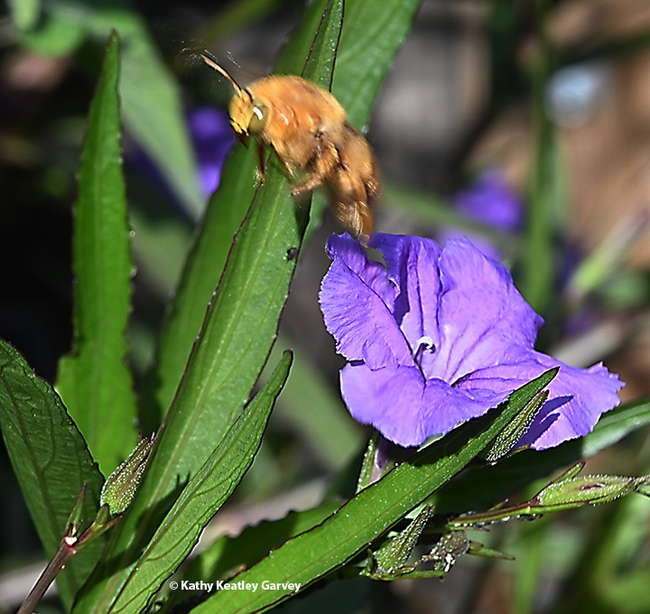