Bill Patterson and his wife, Doris Brown are longtime supporters of the Bohart Museum of Entomology. Here they're at the Bohart Museum Society's pre-Halloween party on Oct. 29, 2022. (Photo by Kathy Keatley Garvey)
The UC Davis College of Agricultural and Environmental Sciences (CA&ES) annually singles out individuals "for their achievements, support, leadership and service to the college with an Award of Distinction honoring those contributions."

So wrote Helene Dillard, dean of CA&ES, in her October column paying tribute to six outstanding individuals who will be honored at an awards dinner and ceremony on Nov. 3 in the Activities and Recreation Center ballroom, UC Davis.

Honey geneticist and UC Davis doctoral alumnus Robert E. Page Jr., winner of the Exceptional Emeriti Award, is known by his colleagues as “the leading honey bee geneticist in the world." (See news article of Oct. 26 on the Department of Entomology and Nematology website and the Oct. 28 post on the Bug Squad blog.)

Butterfly collector Bill Patterson and his wife, Doris Brown, of Sacramento are winners of the CA&ES' "Friend of the College Award." They are longtime friends and supporters of the Bohart Museum, which houses a global collection of eight million insect specimens and is the seventh largest insect museum in North America.

The couple recently donated $1 million to support the museum's insect collection, a gift that will provide the museum with the financial security to support staff and resources, according to Lynn Kimsey, director of the Bohart Museum and a UC Davis distinguished professor of entomology. Doris Brown retired as the chief of Fiscal Programs Division, California Employment Development Department.
Patterson, a Bohart associate since 1993, has donated more than 15,000 specimens to the museum. Let's repeat that: 15,000 specimens!

"Doris and Bill have been incredibly supportive of the Bohart," Kimsey told us. "Bill has collected butterflies and moths for many years and sees the museum as the place he wants to be home to his collection. Doris isn't a collector herself, but she strongly supports his interests and has been enthusiastic about his collection coming here as a permanent home."

Patterson, a native of Oakland, began collecting butterflies at age 6. He received his bachelor's degree in entomology from the University of Arizona, Tucson, in 1962. He worked as a technician for UC Davis entomology professor Howard McKenzie from 1958 to 1968, retiring from UC Davis in 1963.  Patterson also holds a teaching credential from Sacramento State University and taught math and science for 15 years as a substitute teacher, retiring from teaching in 1985.

Doris Brown, born in Seattle, holds a bachelor of arts degree in political science from Washington State University, Pullman, Wash. She also has a master's degree in counseling. She worked as an analyst and manager for the federal and state government and a private consulting firm. She retired as the chief of Fiscal Programs Division, California Employment Development Department. Entomologist Bill Patterson working (volunteer) in the Bohart Museum in 2013. (Photo by Kathy Keatley Garvey)
"I didn't know much about Lepidoptera until I met Bill," she said, "but I had painted and decorated with them. I had walked by the river everyday and loved seeing the butterflies, but after I walked there with Bill I was amazed how many species there were."

They hope their donation will help educate the community about the importance of butterflies and moths. Patterson told Ashley Han in a CA&ES news story: “I believe scientifically valuable collections should not stay in private hands. The museum is the perfect place for my collection to be permanently protected and studied."

The Bohart Museum, founded in 1946 and located in Room 1124 of the Academic Surge Building, 455 Crocker Lane, UC Davis campus, is named for UC Davis professor and noted entomologist Richard Bohart. It is open to the public from 8 a.m. to noon, and 1 to 5 p.m., Mondays through Thursdays.

In addition to the trio of Bill Patterson/Doris Brown and Rob Page, the 2022 recipients of Awards of Distinction are:

Another entomologist, Jeff Smith, the volunteer curator of the Lepidoptera collection at the Bohart Museum, won the "Friend of the College Award" in 2015. (See news story)

CA&ES is known throughout the world for its expertise, educational opportunities, and contributions to society, according to its website announcing the 2022 winners. "Much of that is due to the great dedication and efforts of our faculty, staff, students, alumni and friends of the college." 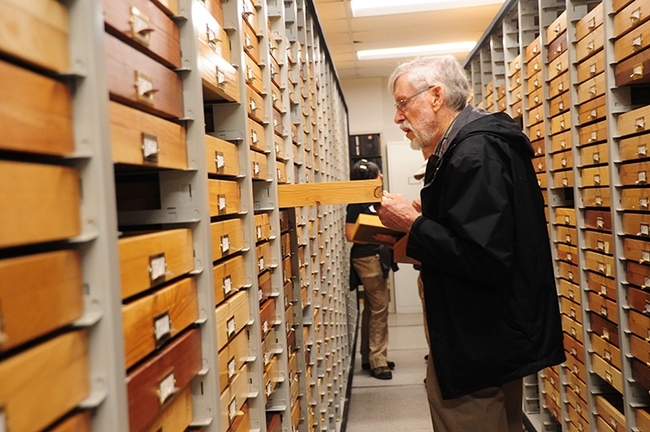 Entomologist and butterfly collector Bill Patterson looks through a drawer during the international Lepidopterists' Society meeting in 2017 at UC Davis. (Photo by Kathy Keatley Garvey) 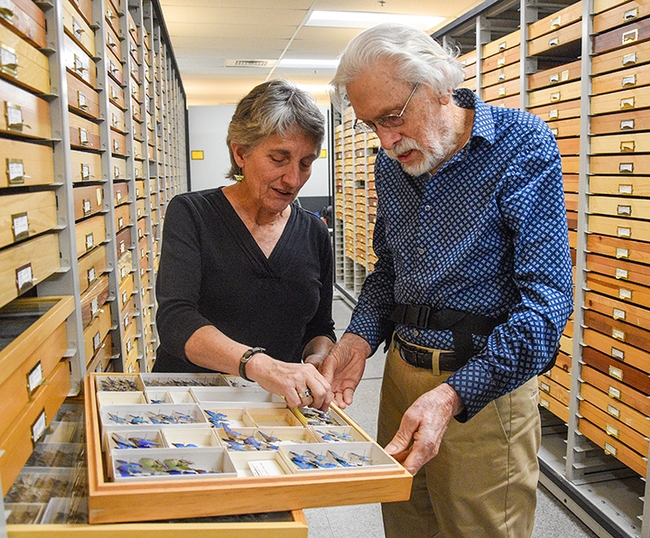 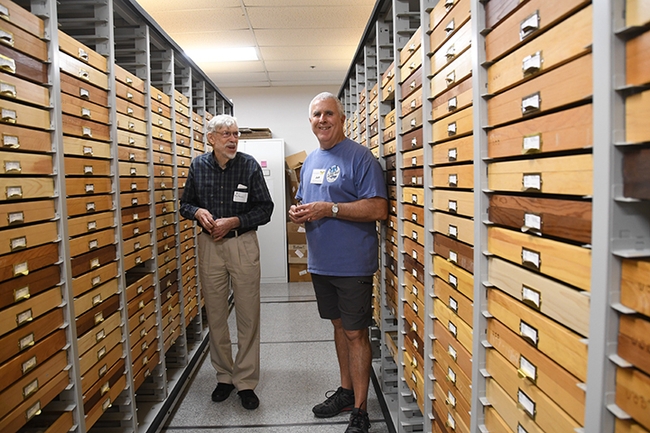 Entomologist and butterfly collector Bill Patterson chats with entomologist Jeff Smith, curator of the Lepidoptera collection at the Bohart Museum, during the international Lepidopterists' Society meeting in 2017 at UC Davis. Both are recipients of the CA&ES Friend of the College Award: Patterson in 2022, and Smith in 2015. (Photo by Kathy Keatley Garvey) 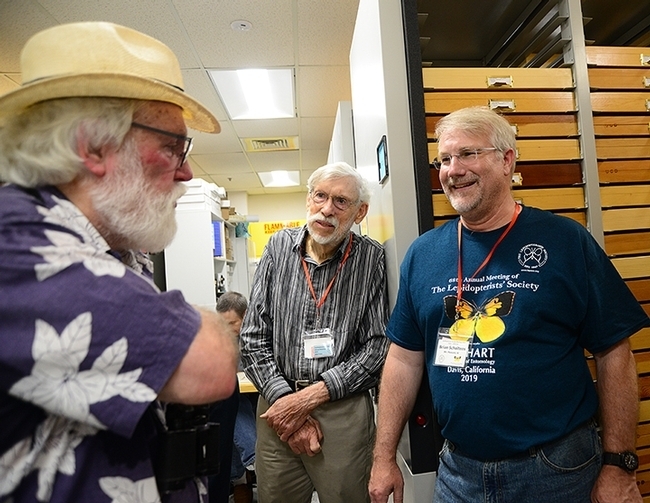