Bug Squad
sitenum=63
Happenings in the insect world
The Art at the Bohart: The Work of Francisco and Brittany "Spiral Galaxy of Butterflies," the work of Francisco Bassó Medel and Brittany Kohler.
Art is part of the Bohart.

Talented artists continually create stunning work at the Bohart Museum of Entomology, directed by Lynn Kimsey, UC Davis distinguished professor of entomology (who herself worked as a scientific illustrator under her maiden name, Lynn Siri).

The most current art/science work that graces the Bohart Museum hallway of the Academic Surge Building on Crocker Lane: "Birdwing Butterfly" and "Spiral Galaxy of Butterflies."

Both are the work of two recent UC Davis alumni: Francisco Bassó Medel, who received his bachelor's degree in wildlife, fish and conservation biology,  and Bohart laboratory assistant Brittany Kohler, who holds a bachelor's degree in nutrition science, with a minor in evolution, ecology and biodiversity.

"The displays were Lynn's idea, as a means to add more art to the museum and use existing specimens that had no data on them, so they could not be used for research purposes," Francisco said. "Lynn gave Brittany and I full creative liberty on how to make the pieces, that is something that I greatly appreciated."

"Spiral Galaxy of Butterflies" is comprised of commercially reared tropical butterflies from the 1960s.  None were wild-caught and none contain collection data.

"For the 'Spiral Galaxy of Butterflies,' we spent about one full work day, spread through several days," Francisco related. "This piece is meant to represent a galaxy, with several planets and stars around it, and a black hole in the middle. We also hid a fly (a bee fly specimen or bombyliid) in there. Hopefully, people will have fun trying to find it and at the same time look at the details of each butterfly and moth." Francisco Bassó Medel, artist
"Since I was very little I have loved animals and art, and it was a privilege to work in a place that allows me to combine those two passions," Francisco said. "With my work I hope to spark the interest of the public in nature, especially small animals that we usually do not notice, like insects."

Francisco worked at the Bohart Museum over the summer and "I am currently working on the new web page for the Bohart and applying to graduate schools."

Brittany said she's "always been an artist and interested in natural science. I use all mediums and enjoys mixed media to create art."  Her membership in the UC Davis Entomology Club enabled her to "explore and get back into what I am truly passionate about." She plans to enroll in graduate school "and that will include entomological pursuits."

"Birdwing Butterfly" is comprised of 112 Brooke's birdwing butterflies, Trogonoptera brookiana, which originated from a commercial rearing facility in Southeast Asia in the 1960s. Birdwings, so named due to their birdlike flight, large size and angular wings. are found throughout tropical Asia.

The species are "dimorphic; the females contain white patches in their upper wing while the males are distinctly black and green," Kimsey noted. Like the Galaxy specimens, none were wild caught and none contain collection data. The lack of data makes them scientifically invaluable for research purposes.

Francisco credited Brittany with "Birdwing Butterfly." He added: "I only did an initial sketch of it and the piece was put together by Brittany." The beginning of the "Birdwing Butterfly" art, the work of Brittany Kohler. (Photo by Kathy Keatley Garvey)

Entomologist Jeff Smith, curator of the Lepidoptera collection at the Bohart Museum, spread all the butterflies. "All of the specimens lingered unspread in paper envelopes for about 50 years," he estimated. "The butterflies in the Spiral Galaxy came from unlabeled surplus material from Chiapas, Mexico."

Founded in 1946 and named for UC Davis professor and noted entomologist Richard Bohart, the insect museum is open to the public from 8 a.m. to noon, and 1 to 5 p.m., Mondays through Thursdays. 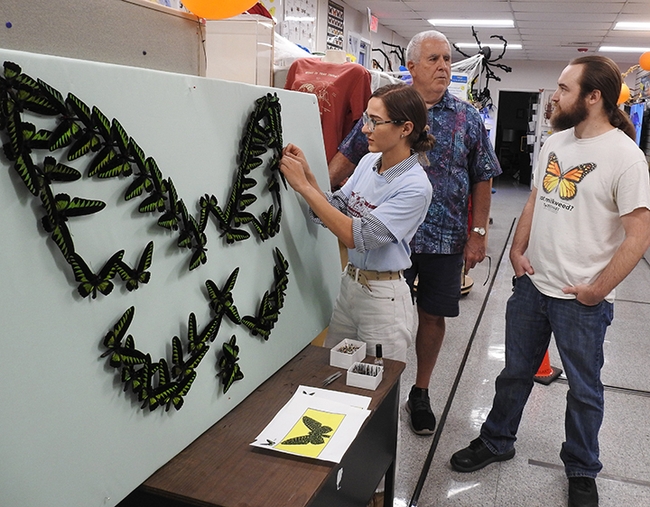 Bohart Museum laboratory assistant and artist Brittany Kohler worked on the "Birdwing Butterfly" display in late October. In back are Jeff Smith, curator of the Lepidoptera collection at the Bohart, who spread all the wings; and collections manager Brennen Dyer. (Photo by Kathy Keatley Garvey) 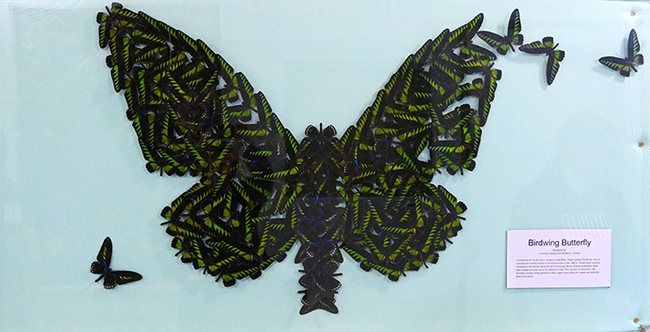 "Birdwing Butterfly": the finished art work. Francisco Bassó Medel did the earlier sketch and the piece was put together by Brittany Kohler. (Photo by Kathy Keatley Garvey) 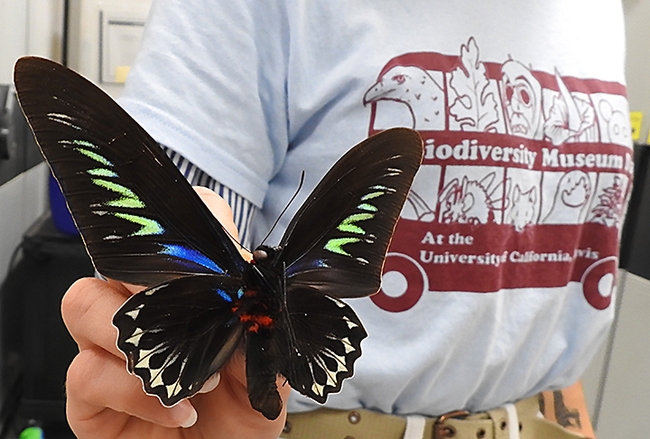 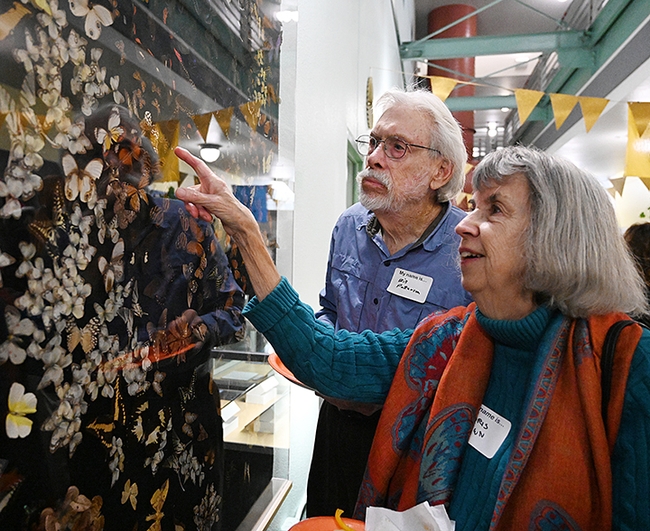