Gamesmaster Alix Whitener
"In 1973 Dr. David Gibby of the Washington State University Extension Center started a program to meet the demand for urban horticulture and gardening advice, which has since expanded to all 50 states and 8 Canadian provinces. What is the name of this program?"

The answer: The Master Gardener program.

The UC Davis team members, all doctoral candidates in the Department of Entomology and Nematology, are Zachary Griebenow of the Phil Ward lab, captain;  Jill Oberski of the Ward laboratory; Erin “Taylor” Kelly of the Geoffrey Attardo lab; and  Madison “Madi” Hendrick of the Ian Grettenberger lab. They won the championship round by edging Alabama's Auburn University team, 75-70.

The student-quiz event, launched in 1982, was formerly known as the Linnaean Games. To get to the nationals, teams first have to win first or second at the branch level.  UC Davis won the regional championship at the Pacific Branch meeting in April. UC Riverside placed second. The branch includes 11 Western states, part of Canada and Mexico, and several U.S. territories.

So, getting to the nationals is not easy.

"It was so exciting to see the high level of knowledge at the games--I'm not surprised, because the teams have worked hard to prepare, strategize, and qualify for the championships," said Gamesmaster Alix Whitener, an ESA board-certified entomologist who coordinated the Entomology Games and presided over the event. "It was exciting to have some close games, too!"

"The Entomology Games website has some great resources for anyone interested in forming a team and competing," said Whitener, who works in Wenatchee, Wash., as the U.S. Field Development manager with the Philadelphia-based FMC Corporation, an agricultural sciences company that advances farming through innovative and sustainable crop protection technologies. "The Virtual Entomology Games will be held later this year if anyone wants to form teams and give it a try!"
"The 2022 Entomology Games were once again a highlight of the ESA Annual Meeting for students in entomology from all over the country," said Games Committee chair Meredith Spence Beaulieu, university program manager of Global One Health Academy, North Carolina State University. "My fellow members of the Entomology Games Committee and I congratulate the University of California, Davis, team on their victory, and we commend all the teams and students who participated this year."
Members of the Auburn team were Dan Aurell, Chelsea Smith, and Dylan Brown. In the preliminaries, Alan Jeon also competed on the Auburn team.

The Entomology Games championship match will be posted soon on ESA's YouTube channel.  The full bank of questions will be loaded on this site. The previous UC Davis championships:

Ready to answer some more questions--questions that were asked at the 2022 Entomology Games?

You got them both correct, of course? 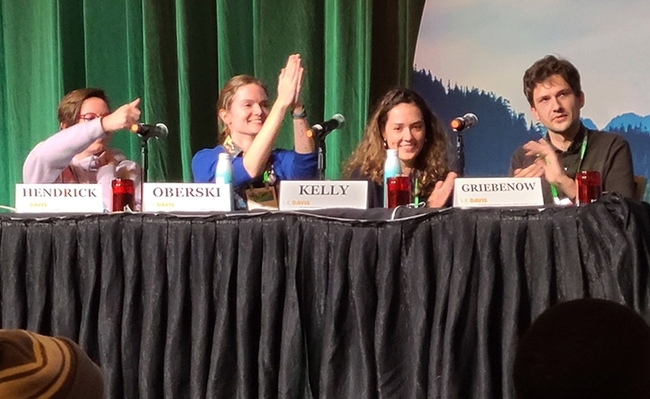