Amina Harris, director of the UC Davis Honey and Pollination Center, checks out the aroma before tasting honey. (Photo by Kathy Keatley Garvey)
The late Jackie Gleason wasn't thinking about honey when he coined the catchphrase, "How Sweet It Is."

Honey, however, is not always sweet, says Amina Harris, director of the UC Davis Honey and Pollination Center, who is to honey what noted wine connoisseurs are to wine.

Her descriptions of honey varietals are not only remarkable but legendary.

You, too, can learn about honey and how to taste varietals from California, the United States, and throughout the world at the center's series of three classes that begin next month.

The classes take place Feb. 8,  March 22, and April 25 in the Sensory Theater, Robert Mondavi Institute, located at 392 Old Davis Road, UC Davis campus. You can register for a single class ($100) or register for all three classes and receive a sample set of three honeys as a gift ($25 value).

This is the first in the series of three classes. You can taste the honeys of California while learning about the unique characteristics of each varietal, Harris says. The honeys will be paired with a selection of cheeses from throughout the state. The first class is from 5:30 to 7 p.m., Feb. 8 in the Sensory Theater, Robert Mondavi Institute, 392 Old Davis Road, Davis. Event Details

You can explore regional honey favorites from Florida tupelo, to Applachian sourwood and on to Northwestern fireweed. Harris also says that "We will taste and talk about mead, the alcoholic beverage made from honey, and how it relates to regional honeys." The second of the three classes in the Honey Exploration Series is from 5:30 to 7 p.m., March 22 in the Sensory Theater, Robert Mondavi Institute. Event Details

The last of the three classes in the Honey Exploration Series means "traveling the world through your taste buds."  You may not have traveled much, but you'll taste honey from Brazil, Australia, Europe and perhaps even a tiny bit of the rare Melipona, a genus of stingless bees.  (Factoid from Wikipedia: "The largest producer of honey from Melipona bees in Mexico is in the state of Yucatán where bees are studied at an interactive park called 'Bee Planet' which is within the Cuxtal Ecological Reserve. The class is set for 5:30 to 7 p.m., April 25 in the Sensory Theater, Robert Mondavi Institute. Event Details 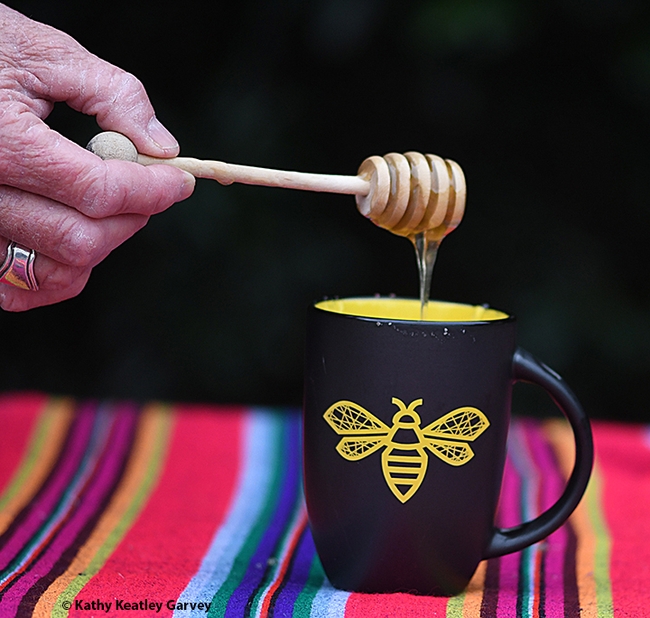 A dipper of honey for your tea? Sweet! (Photo by Kathy Keatley Garvey)
Focus Area Tags: Agriculture, Environment, Innovation, Yard & Garden
Tags: Amina Harris (80), honey-tasting workshops (1), Jackie Gleason (1), UC Davis Honey and Pollination Center (49)
Comments: 1
Comments:
by Eileen McMahon
on January 17, 2023 at 10:38 AM
I am a beekeeper and master gardener in Santa Clara County. I wish these wonderful classes were closer or during the day.
Leave a Reply: