Teddy Marlatte's facial expression says it all. He was celebrating his fourth birthday when he and his family visited the Bohart Museum of Entomology on Jan. 12. (Photo by Kathy Keatley Garvey)
When you visit a traditional zoo, you might see lions, tigers and bears.

Insects fascinate Teddy Marlatte of Auburn, so it was only natural that his parents, Chris and Maddy Marlatte would drive him to the Bohart Museum on Thursday, Jan. 12, to help him celebrate his fourth birthday.

His little sister, Reagan, 1-1/2, tagged along, too, but she favored her stuffed animal. Insects will come later!

"Teddy loves discovering things and looking at details and learning," his mother commented. "I think he could become an entomologist. A career with endless discovery and love for the finer details is right up his alley."

"It was our first time coming and we can't wait to visit again!" she said.

The Marlatte family admired dozens of specimens (the Bohart Museum houses a global collection of eight million insect specimens) and then headed toward the petting zoo. A stick insect crawls up the arm of Teddy Marlatte. (Photo by Kathy Keatley Garvey)
And that Vietnamese centipede named Beatrice.

The museum, located in Room 1124 of the Academic Surge Building on Crocker Lane, UC Davis campus, is dedicated to "Understanding, documenting and communicating terrestrial arthropod diversity."

The petting zoo, a fan favorite, has been a part of the Bohart Museum since its beginnings in Briggs Hall. Founded in 1946, the museum is named for noted entomologist and UC Davis professor Richard Bohart (1913–2007).

"We've had the petting zoo since we were in Briggs Hall  (1990s-ish) but nothing like the current scale," said Kimsey, a UC Davis doctoral alumna who studied with "Doc" Bohart.

The Vietnamese stick insect colony (Medauroidea extradentata) is an all-female colony, Kohler said. "They are parthenogenetic (a form of reproduction in which an egg can develop into an embryo without being fertilized by sperm). "Someone from the public recently named one Wubbie, the largest brown color morph."

"We also have three tobacco hornworm chrysalids that we're hoping will emerge into the six-lined sphinx moths," Kohler said. "We raise these periodically to show their life cycle."

Kimsey estimated that the Madagascar hissing cockroaches, aka "hissers," live about five years, and the cave roaches "probably the same."

"Tarantulas live decades, at least 25 years, probably longer," Kimsey said. "Stick insects? Not sure, but I'd guess up to a year."

During the Auburn family's Jan. 12 visit, Yang and Kohler introduced and discussed the zoo residents and answered questions.

And Teddy? His facial expressions said it all.

Editor's Note: The Bohart Museum is open to the public from 8 a.m. to noon, and 1 to 5 p.m., Mondays through Thursdays.  Group reservations may be made through bmuseum@ucdavis.edu. The Bohart will host an open house, focusing on beetles, from 1 to 4 p.m., Sunday, Jan. 22. Open to the public, it is free and family friendly. Among the presenters will be UC Davis graduate student and burying beetle researcher Tracie Hayes of the laboratory of Professor Louie Yang, UC Davis Department of Entomology and Nematology; beetle specialist Fran Keller, biology professor at Folsom Lake College and a Bohart Museum scientist and UC doctoral alumna; and Cal Fire bark beetle specialist Curtis Ewing, a senior environmental scientist, Forest Entomology and Pathology. 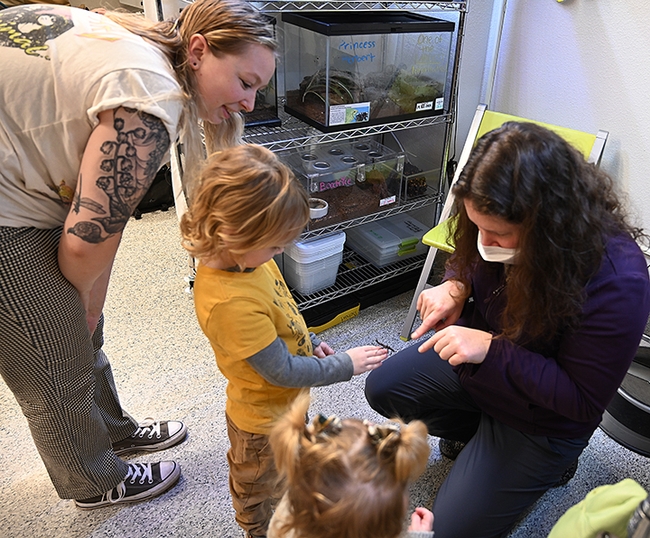 Tabatha Yang, the Bohart Museum's education and outreach coordinator, introduces a stick insect, aka walking stick, to Teddy Marlatte, 4, and his mother, Maddy Marlatte of Auburn. In the foreground is Teddy's sister Reagan. (Photo by Kathy Keatley Garvey) 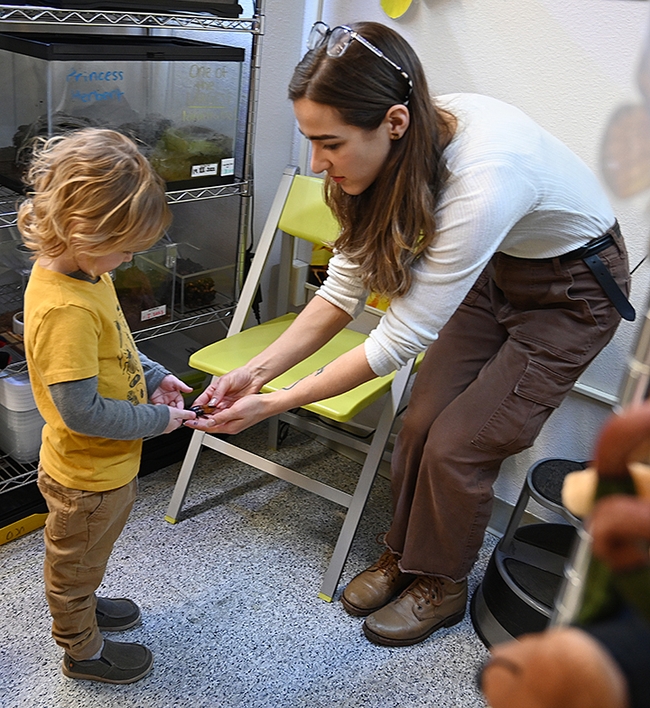 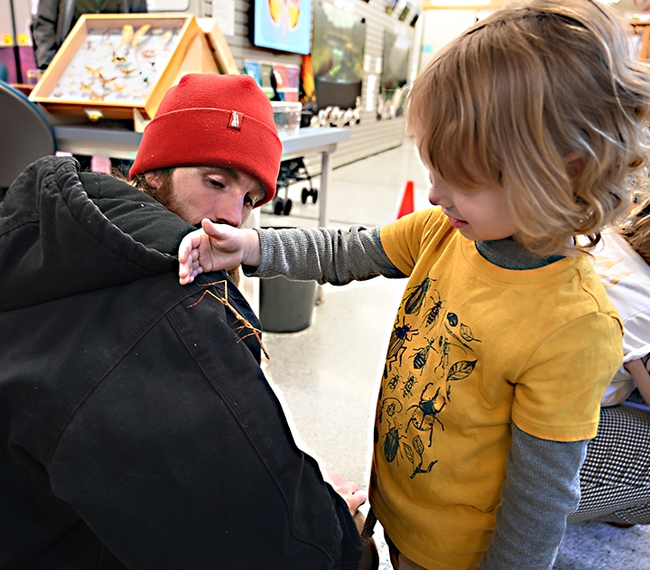 Watch him walk! Teddy introduces his father, Chris Marlatte, to a walking stick at the Bohart Museum of Entomology. (Photo by Kathy Keatley Garvey) 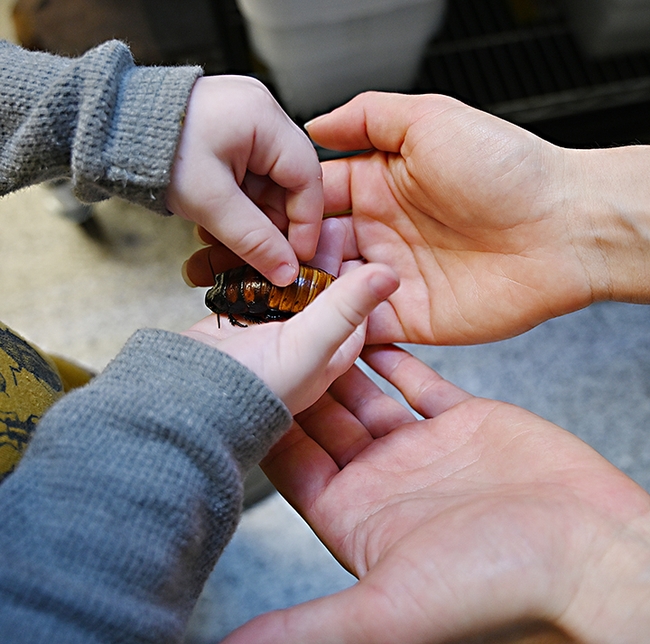 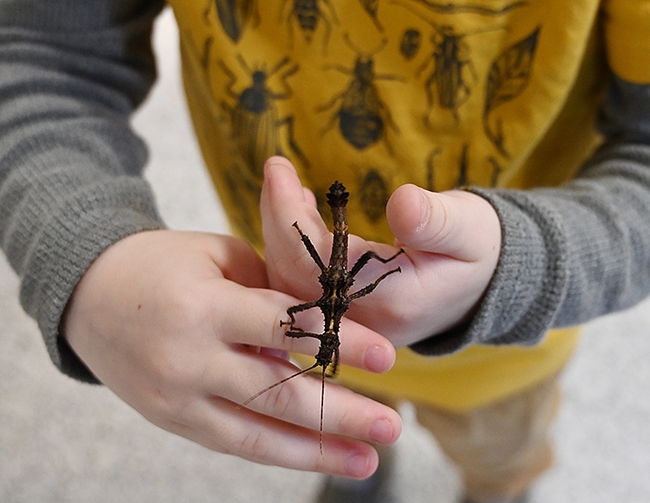 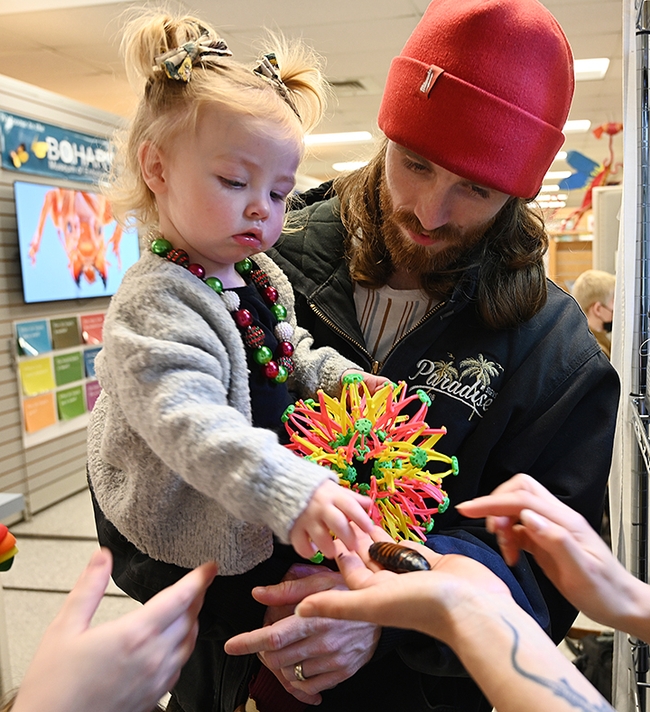