Beatriz Moisset
Not all bees are honey bees.

Not all floral visitors are bees.

That's why we're glad to see the publication of Bee Basics:  An Introduction to Our Native Bees.

It will introduce folks to such native bees as leafcutter bees, sweat bees and bumble bees.

It's co-authored by retired biologist Beatriz Moisset of Willow Grove, Pa., and entomologist Stephen Buchmann, international coordinator of the Pollinator Partnership, based in San Francisco. The illustrations, based on Buchmann's photos, are by Steve Buchanan of Wingsted, Conn., known for creating the U.S. Postal Service’s pollinator stamps that were issued June 29, 2007.

“From forests to farms, from cities to wildlands, there are 4000 native bee species in the United States, from the tiny Perdita minima to large carpenter bees,” they wrote.

“The honey bee, remarkable as it is, does not know how to pollinate tomato or eggplant flowers. It does very poorly compared to native bees when pollinating many native plants, such as pumpkins, cherries, blueberries, and cranberries.”

The book includes descriptions and illustrations of bees from such families as Apidae, Andrenidae, Halictidae, Megachilidae and Colletidae.

They wrote: “The members of the five most common families, Apidae, Halictidae, Andrenidae, Megachilidae and Colletidae, can be found throughout the North American continent from Canada and Alaska to warm and sunny Florida and Mexico; from forests to deserts; from remote wildernesses to gardens and backyards; even the National Mall in the heart of our nation’s capital sports a native bee fauna. Perhaps the only places where bees are absent are the high mountains.”

“There is even a hardy little bee, the arctic bumble bee, which lives within the Arctic Circle.”

The booklet also offers tips on how to attract pollinators. A great resource!

Steve Buchmann, of Tucson, Ariz.,  received his doctorate in entomology from the University of California, Davis with major professor Robbin Thorp. Now an adjunct faculty member in the entomology and EEB (Ecology and Evolutionary Biology) departments at the University of  Arizona, Buchmann is the author of 150 scientific publications and 12 bbooks, including The Forgotten Pollinators.

Beatriz Moisset, born in Argentina and a resident of the United States for more than 40 years, obtained her doctorate in biology from the University of Cordoba, Argentina. She completed her postdoctoral work at the Jackson Laboratories, Bar Harbor, Maine studying neurochemistry and behavior. A multitalented person (she's an artist, photographer, author and public speaker), she has displayed her pastels and oil paintings at many art shows and contributes her insect photography to the online resource BugGuide.Net.

“I became interested in pollinators after my retirement, combining photography and painting with field observations,” Moisset said. 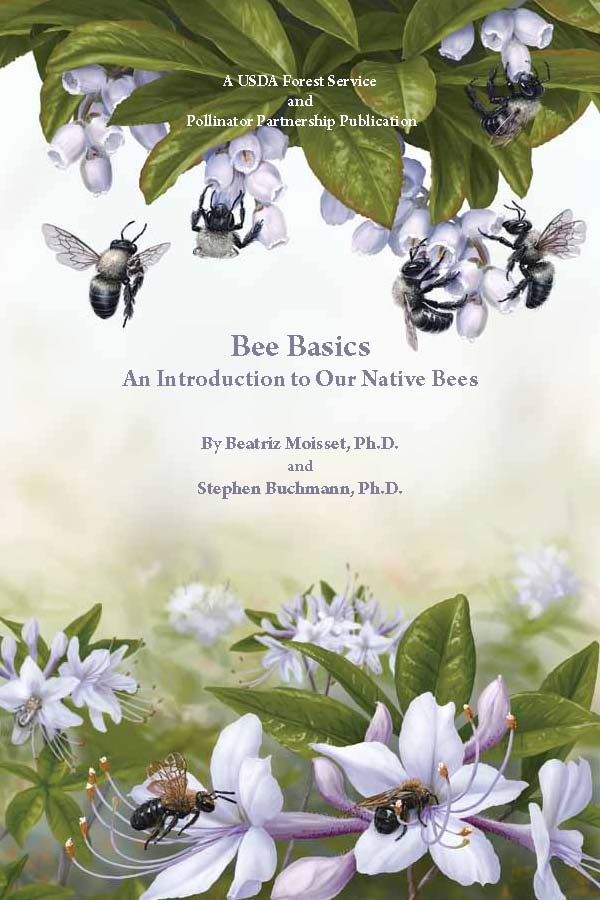 The cover of Bee Basics: An Introduction to Our Native Bees.
Tags: Beatriz Moisset (3), Bee Basics (1), native bees (29), Stephen Buchmann (6), Steve Buchanan (2)
Comments: 1
Comments:
by Beatriz Moisset
on May 11, 2013 at 5:22 PM
A new book by Beatriz Moisset: "A Beginners Guide to Pollinators and other Flower Visitors." This simple guide for young adults and beginners is the only one of its kind. It covers the most common flower visitors, including pollinators. Brief descriptions, illustrations, geographic distribution, habitat and season.