A male valley carpenter bee (Xylocopa varipuncta), aka "teddy bear," recently visited his Davis home during the long holiday season. "We found it behind the couch," he said.

It's a green-eyed blond and fuzzy just like a teddy bear, thus its name. The female are solid black.

To the untrained eye, the male is often thought to be "a new species, a golden bumble bee." We get scores of telephone calls asking what this "big yellow bumble bee" is. A bumble bee, it isn't. A carpenter bee, it is.

Every time I see the females buzzing around, I think "Can the 'teddy bears' be far behind?"

I saw one zipping through our garden last summer but it never stopped long enough for me to capture its image.

But with Thorp's "teddy bear," I could. It's in his refrigerator, spending part of the winter there.  Soon, he said, he'll give it a little honey. 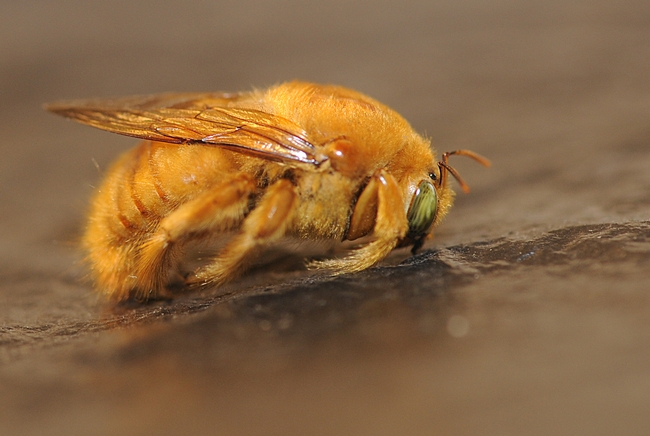 A male Valley carpenter bee found in the Robbin Thorp home in Davis. (Photo by Kathy Keatley Garvey)
Tags: male valley carpenter bee (13), Robbin Thorp (267), Xylocopa varipuncta (29)
Comments: 4
Comments:
by Travis Tremble
on December 23, 2013 at 9:09 AM
As I was replacing the flashing on my roof in Huntington Beach, I pulled some wood apart and found the same thing burrowed in our roof! He had eaten an entire trail of wood. I have pictures if you'd like to see them!
by Katherine Graham
on April 22, 2019 at 5:18 PM
Are these the bees that pollinate tomatoes?
by Kathy Keatley Garvey
on April 24, 2019 at 5:22 PM
You might be thinking of bumble bees, Bombus sp., which are very good at pollinating tomatoes.
by Martha Baratti
on April 20, 2022 at 8:21 PM
I observed a many male Teddy Bear bees on April 19, 2022, in northern California at Fortuna, Humboldt County.
Leave a Reply: