Bug Squad
sitenum=63
Happenings in the insect world
Oh, Brother, Where Art Thou?

It's tough being a drone honey bee this time of year.

The drones, or male bees, don't survive the winter.

Bee breeder-geneticist Susan Cobey of the Harry H. Laidlaw Jr. Honey Bee Research Facility at UC Davis  admits to having a soft spot for drones. Once the honey-gathering season is over, the worker bees (sterile females) evict the drones from the hive, as the only function of the males is to mate.

“They’re cold and hungry, sitting there on the doorstep and wanting to go back in. They’re attacked and they die.  Well, it’s a matriarchal society.”

Throughout the spring, summer and early fall, drones routinely leave the hive in mid-afternoon on a mating expedition.  Last Friday at the Laidlaw facility, the drones exited the hives around 3 p.m.  They wobbled out of the hive and then took off. The plan? Head  for "the drone congregration area,"  said UC Davis apiculturist Eric Mussen.  Drones congregate not far from the hive and wait for a virgin queen bee to arrive.

The virgin queen mates with mulitple drones, often as many as 12 to 25, and then returns to her hive to lay eggs for the rest of her life. She never leaves the hive after her maiden flight. "She's an egg-laying machine," as Cobey says.

For the drones, it's a different story. They mate and then they die. And if they can't find a mate? With the onset of cold weather and winter, if they try to return to the hive, their sisters won't let them back in. They don't want the drones taxing their food supply.

Oh, brother, where art thou? 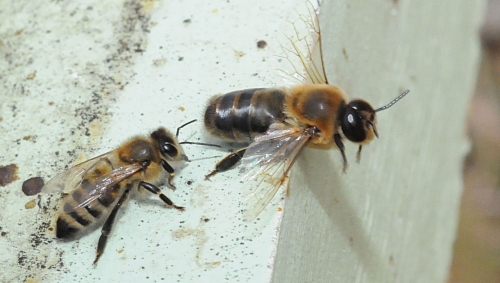 Drone takes off
A drone (front) starts his takeoff to find a virgin queen. At left is a worker bee, his sister. Drones don't survive the winter; the girls kick the boys out of the hive.(Photo by Kathy Keatley Garvey)
Comments: 0
No Comments Posted.
Leave a Reply: