After all, he's served as the Extension apiculturist with the UC Davis Department of Entomology since 1976.

Over the last several weeks, however, he's been fielding scores of phone calls from the news media and delivering presentations to various groups. Last Tuesday, he addressed the University of California Cooperative Extension (UCCE) Pollinator Workshop in Woodland.

This morning he discussed bee health with a news team from KGO Radio, San Francisco.

Everyone wants to know how the bees are. Just as we greet folks daily with "How are you?" Mussen hears a daily "How are the bees?"

So, when the KGO news team telephoned him at 7 this morning, Mussen knew the topic: Bee health.

"Are we making any progress to finding out what causes colony collapse disorder (CCD)?" Mussen was asked.

CCD is a mysterious malady characterized by adult bees abandoning the hive.

"I think things are a little bit better...but we don’t know what causes CCD," Mussen told KGO. "And what the beekeepers have found, however, is that malnutrition seems to be pretty important. One beekeeper told me that $45 invested in food for the bees--artificial food, you know because we can’t really substitute for pollen--made his bees considerably better.

"And the second thing they’re finding is that it seems to go in a two-year cycle. The young colonies don’t seem to have that so much of a problem but the second year ones do, so now what they’re doing is breaking those second-year colonies down into smaller ones starting them over again and keeping them young and that helps too."

Mussen believes that CCD is linked to multiple factors, including parasites, pesticides, diseases, malnutrition and stress. The end result: a compromised or weakened immune system.

Some folks finger a class of pesticides, the nicotine-based neonicotinoids, as "the cause" of CCD. Not "the cause," says Mussen.

When the KGO news team quizzed him about this systematic pesticide--how France banned it and then "saw a return of the bees within a year"--Mussen responded: "Well, by the  same token, there were some researchers in France that took sugar syrup and laced it with sublethal doses of the particular chemical you’re talking about and fed it to the bees all year and those bees were fine that year, through the winter and then into the next spring."

At Tuesday's meeting in Woodland, Mussen cautioned that adjuvants (materials added by a pesticide applicator to a product "to make it work better") may be causing brood and queen-bee rearing problems. "Adjuvants--especially the organosilicone 'superspreaders'--seem to make non-toxic fungicides toxic to honey bee brood," Mussen said. 'These superspreaders can penetrate the waxy cuticle on Eucalyptus leaves. And the No. 1 bee protection is their waxy cuticle."

Although the U.S. Environmental Protection Agency (EPA) and the California Department of Pesticide Regulation demand acute toxicity tests before a pesticide is marketed, still there are concerns, Mussen told the Woodland crowd. For one, the contact/ingestion studies last only 48 hours and "that's too short of a time period" to see what happens to the bees.  "Sublethal effects are not required, chronic exposure to sublethal doses is not required, and synergism is not studied," he said.

Look for him to expand on the issue in his next from the UC Apiaries newsletter, available free on the UC Davis Department of Entomology website. 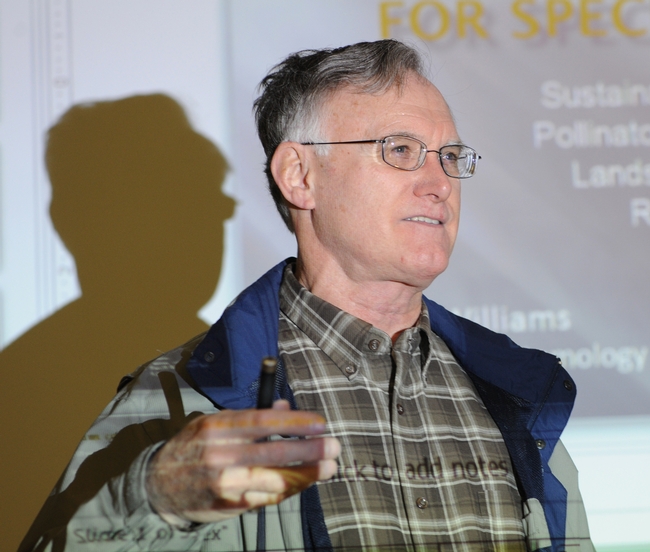 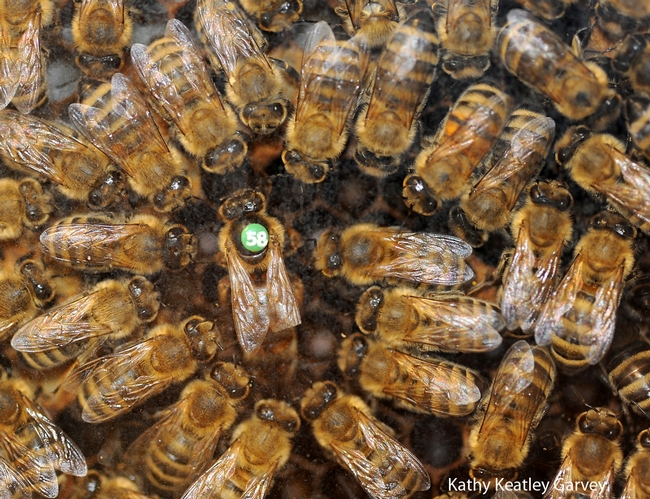