The neonicotinoid pesticides are creating quite a buzz in the bee world.

Research published this week in the Science journal zeroed in on the effects of the neonics on honey bees and bumble bees.

"Five years ago, bees made headlines when a mysterious condition called colony collapse disorder decimated honey bee colonies in parts of the United States," Stokstad wrote.  "Now bees are poised to be in the news again, this time because of evidence that systemic insecticides, a common way to protect crops, indirectly harm these important pollinators. Two field studies reported online this week in Science document problems. In bumble bees, exposure to one such chemical leads to a dramatic loss of queens and could help explain the insects' decline. In honey bees, another insecticide interferes with the foragers' ability to find their way back to the hive. Researchers say these findings are cause for concern and will increase pressure to improve pesticide testing and regulation."

Meanwhile, Extension apiculturist Eric Mussen of the UC Davis Department of Entomology is fielding calls about the research.

Here's her quote from her news story:

“There are a whole lot of things that stress the honeybees,” said Eric Mussen, a honeybee specialist at the University of California, Davis. “You can’t point your finger at one thing and say, ‘That is the problem.’ ”

Mussen cautioned against singling out neonicotinoids when other pesticides could have similar effects on bees. Besides, he said, many insects have built up immunity to neonicotinoids, so farmers are likely to switch to different pesticides anyway.

As Mussen has been saying all along, the declining bee population is due to a number of factors: pests, pesticides, parasites, diseases, malnutrition and stress.

So, there's no silver bullet--no major culprit--that's causing the declining bee population. It's a multitude of factors. Scientists continue to investigate them all. 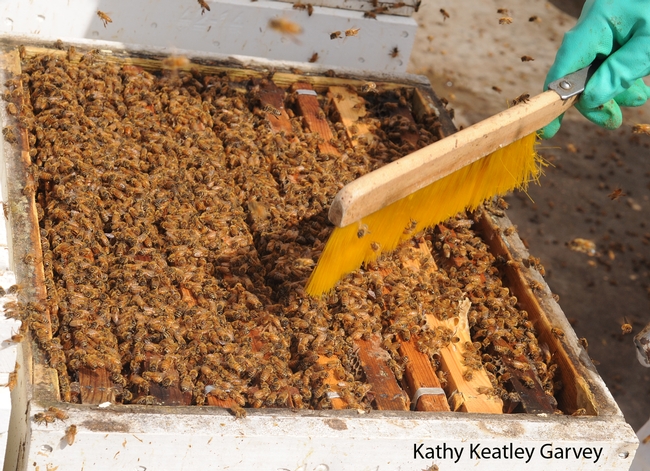 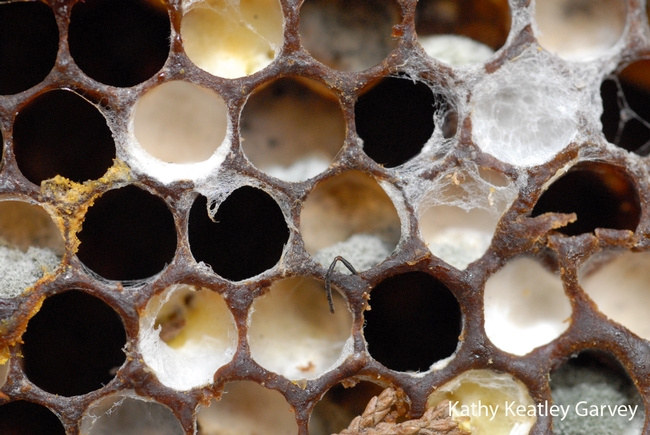 Bees have abandoned the hive in an apparent colony collapse disorder. (Photo by Kathy Keatley Garvey)
Tags: colony collapse disorder (14), Eric Mussen (250), honey bees (396), neonicotinoids (4)
Comments: 1
Comments:
by Eddie York
on March 21, 2013 at 6:45 PM
One of the leading neonicotinoids available to home users and found in most stores in this county is "Bayer Advanced Tree and Shrub." I would discourage people from using it as a drench, not only does it travel to the pollen and nectar of the tree or shrub but it also is found in the pollen, nectar and exudations of the plants living underneath the tree or shrub. It also stays in the soil for awhile. A bee only needs 1ppm in order to poison it enough to make it not able to find its way back to the hive.
Leave a Reply: