Praying mantis figured in some of the questions. (Photo by Kathy Keatley Garvey)
They know their insects.

They know what a "land lobster" is. They know diseases caused by trypanosomes. They can name the six orders of arthropods represented in the circus troupe from the movie, "A Bug's Life."

The UC Davis Department of Entomology's Linnaean Team, comprised of four graduate students, applied their knowledge of entomological facts to win the championship at  the Pacific Branch of the Entomological Society of America (ESA) competition, held recently in Portland, Ore.

Matan Shelomi, Kelly Hamby, Kelly Liebman, and Jenny Carlson now will head to the  Linnaean Games at the international organization’s 60th annual meeting, set for Nov. 11-14 in Knoxville, Tenn.  The ESA’s Linnaean Games are college bowl-style games based on entomological facts and insect trivia. Team members respond to the moderator's questions by buzzing in with the answers. (See video of last year's winners at the national level.)

The prize at the regionals was $500 to defray costs to the national event.   Extension entomology specialist Larry Godfrey of the Department of Entomology faculty serves as the team’s advisor.

Six teams—UC Davis, UC Berkeley, UC Riverside, University of Idaho, and two teams for Washington State—competed in the lively six-round , three-hour event.  In the first round, UC Davis was pitted against one of the WSU teams. “The questions were very difficult compared to the two rounds that preceded us,” Shelomi said. “We tied 30/30, but we won the tiebreaker question. It was a picture question showing a map of Ball's Pyramid, Lord Howe Island, New Zealand, taken from a recent National Public Radio (NPR) article on an insect recently rediscovered there after having been thought to be extinct.”

Shelomi, the team’s phasmid expert, said he was “was very happy to see that picture and knew the answer before they asked the question. After that, we played the University of Idaho and won, then we had a showdown with UC Berkeley for the top two positions.” Both will represent the Pacific Branch in Knoxville.

Hamby served as the agricultural entomology and integrated pest management (IPM) expert on the team; Liebman and Carlson, medical entomology; and Shelomi,  insect physiology.  This was the first-ever Linnaean Games competition for Hamby and Liebman.

Some other questions asked:

Name four of the six orders of arthropods represented in the circus troupe from the movie "A Bug's Life." (Answers: Lepidoptera, Mantodea, Coleoptera, Phasmatodea, Isopoda, Aranaea.)

What are the two diseases caused by trypanosomes and vectored by insects, and where do they occur? (Answers: Chagas in South America, African Sleeping Sickness in sub-Saharan Africa.)

This is the second consecutive year that a UC Davis team has won the Pacific Branch competition. Each individual branch of the ESA may send its winning team and runner-up to compete in the internationals. Gold medals are awarded to the winning team, and silver medals to the runner-up.  In addition, each of the two winning teams receives a plaque for its department. 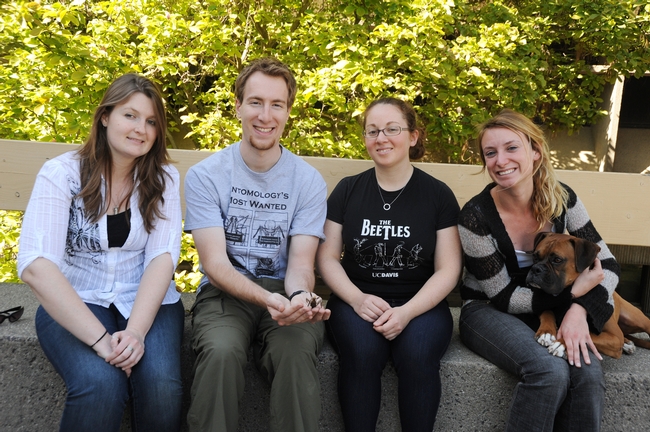