Bee breeder-geneticist Susan Cobey, who holds a dual appointment at the University of California, Davis and Washington State University (WSU), believes that "increasing the overall genetic diversity of honey bees may lead to healthier and hardier bees that can better fight off parasites, pathogens and pests." Just as stock improvement has served the poultry, dairy and swine industries well, the beekeeping industry needs access “to stocks of origin or standardized evaluation and stock improvement programs,” she says.

You can hear her discuss her research on “Importation of Honey Bee Germplasm to Increase Genetic Diversity in Domestic Breeding Stocks" at the UC Davis Department of Entomology seminar from 12:10 to 1 p.m., Wednesday, May 2 in 122 Briggs Hall.

A UC Davis researcher since May 2007, Cobey is a former student of "Father of Honey Bee Genetics"  Harry H. Laidlaw Jr., (1907-2003), for whom the UC Davis bee lab is named. She provided practical application to the Robert Page-Harry Laidlaw Closed Population Breeding Program (CPRP) theory in the development of the New World Carniolan line, in its 31st generation and now an industry standard.

"The many problems that currently face the U.S. honey bee population have underscored the need for sufficient genetic diversity at the colony, breeding, and population levels,” wrote Cobey and colleagues Walter “Steve” Sheppard, professor and chair of the WSU Department of Entomology and David Tarpy of North Carolina State University (formerly a graduate student at UC Davis) in a chapter of the newly published book, Honey Bee Colony Health: Challenges and Sustainable Solutions (Contemporary Topics in Entomology).

“The limited foundation stock has been propagated and expanded to establish the existing U.S. beekeeping industry. In addition, the destruction of a once widespread feral population by parasitic mites and the genetic consequences of large scale queen production practices have contributed to reduce genetic diversity in U.S.  honey bee populations. “

Cobey is involved in a number of scientific research projects. She and fellow scientists and beekeepers from UC Davis, WSU and the California Bee Breeders' Association are working together to develop and test protocols for the international exchange of honey bee germplasm and to incorporate imported stocks into established U.S. breeding stocks.

So it's not surprising that she's in high demand as a speaker. Cobey has lectured throughout the United States, Central and South America, South Africa, New Zealand and Australia, and was recently invited to Cuba for the 3rd Latin-American Beekeepers' Meeting and the 4th Cuban Beekeeping Congress.

Come November, Cobey will be a keynote speaker for the Apimondia Symposium on Honey Bee Breeding in Quebec.

If you're unable to attend the Cobey seminar at UC Davis, not to worry. It's scheduled to be videotaped and posted at a later date on UCTV. 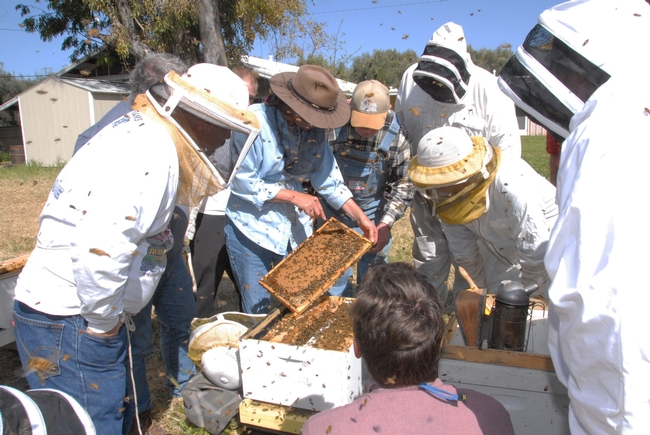