It's a behavior so named because they look as if they're scrubbing clothes on a washboard or scrubbing their home.

It occurs near the entrance of the hive and only with worker bees. They go back and forth, back and forth, a kind of rocking movement. No one knows why they do it. It's one of those unexplained behaviors they've probably been doing for millions of years.

Bee breeder-geneticist Susan Cobey of the University of California, Davis and Washington State University, has witnessed washboarding scores of times. Last week the unusual behavior occurred on two of her hives at the Harry H. Laidlaw Jr. Honey Bee Research Facility at UC Davis. She hypothesizes that these bees are in the "unemployment line." It's a time when foraging isn't so good, so these bees are "sweeping the porch" for something to do, she speculates.

Emeritus professor Norman Gary of UC Davis Department of Entomology writes about it in his chapter, Activities and Behavior of Honey Bees, in the Dadant publication The Hive and the Honey Bee.

"They stand on the second and third pairs of legs and face the entrance. Their heads are bent down and the front legs are also bent," wrote Gary, who has kept bees for more than six decades. "They make 'rocking' or 'washboard' movements, thrusting their bodies forward and backward. At the same time they scrape the surface of the hive with their mandibles with a rapid shearing movement, sliding over the surface as if cleaning it."

They pick up some material and then clean their mandibles.

Gary thinks that "these rocking movements probably serve as a cleaning process by which the bees scrape and polish the surface of the hive."

Like most people, professor/biologist/bee researcher James Nieh of UC San Diego has never seen this behavior. Nieh, who recently presented at seminar at UC Davis, later commented "It is an interesting behavior that would be particularly fascinating to observe in natural colonies in trees. It does seem to involve some cleaning behavior, although it is possible that bees are depositing some olfactory compound while they are rubbing the surface with their mandibles. We are currently conducting research in my lab on the effects of bee mandibular gland secretions on foraging orientation behavior. A new set of experiments will involve examining the effect of mandibular gland secretions on bee behaviors at the nest. I will definitely consider looking at how this potential pheromone affects washboarding."

We managed to capture the behavior with our Iphone and posted it on YouTube.

It's interesting that of the some 25 research hives at the Laidlaw facility, occupants of two of Cobey's hives exhibited washboarding last week.

So, what are washboarding bees doing? Cleaning their home where pathogenic organisms might congregate, per a theory by Katie Bohrer and Jeffrey Pettis of the USDA-ARS Bee Research Lab?

Or are they just creating "busy work"--"sweeping the porch" for something to do?

It would be interesting to find out! 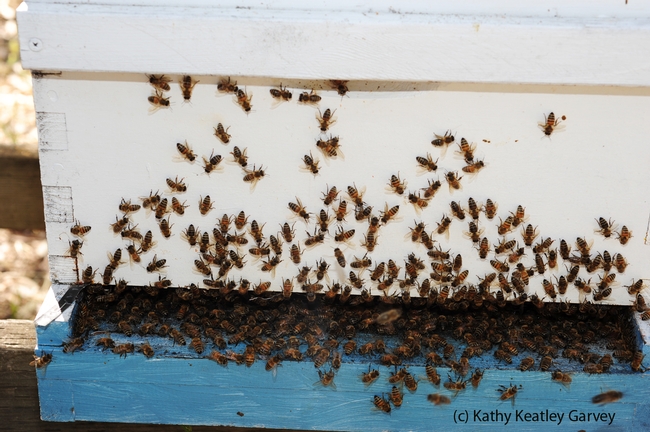 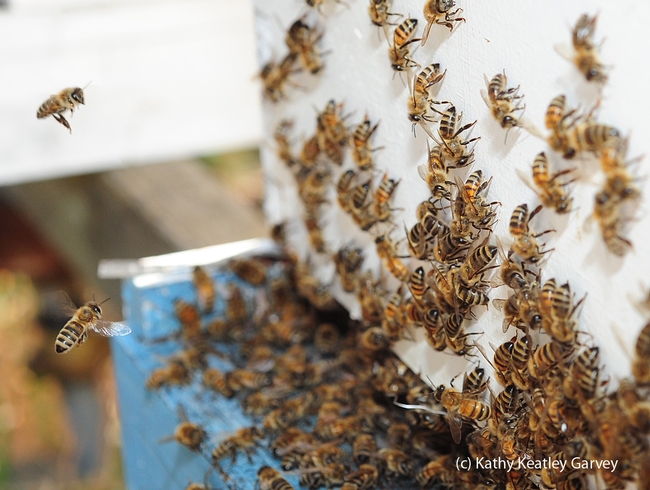 Recent Posts
Don't Miss This Virtual Seminar About an Ant Genus from the Amazon
December 6, 2022