You may not know it, but you've eaten insects.

The other day I meandered over to the Bohart Museum of Entomology, UC Davis campus,  and a sign told me that.

There it was--plain as day (as if a day can be plain). "In your lunch, you probably eat more insects than you realize,"  the sign read. It went on to quote the Food and Drug Administration, that veritable institution that protects our eating habits--or tries to.

If you eat 100 grams of chocolate, you will also eat 80 insect fragments.

If you eat 100 grams of ground cinnamon, that means 800 insect fragments.

And 100 grams of macaroni? That would be 100 insect fragments.

Are you fond of mushrooms? Eat 100 grams of mushrooms and  you'll also be eating 20 maggots. Bon Appétit!

So you like pizza? In every 100 grams of pizza sauce there are 30 fly eggs or two maggots.

(Note: The Bohart Museum of Entomology, directed by Lynn Kimsey, is at 1124 Academic Surge. It houses more than 7 million specimens and is the seventh largest insect museum in North America.) 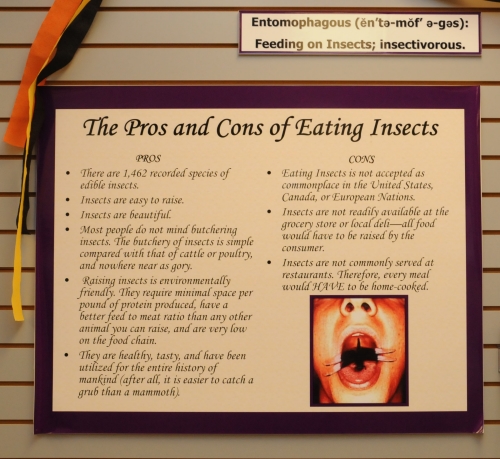 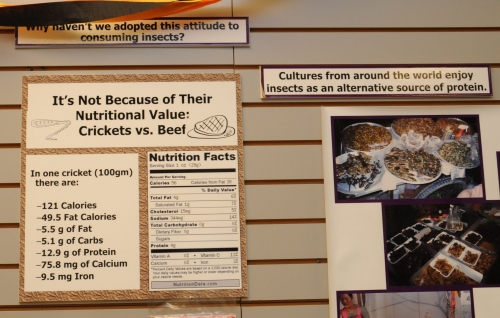 Cricket Anyone?
CRICKET ANYONE?--A sign at the Bohart Museum of Entomology indicates the nutritional value of eating a cricket. Bon appétit! (Photo by Kathy Keatley Garvey)
Tags: Bohart Museum of Entomology (382), eating insects (1)
Comments: 1
Comments:
by Jeannette E. Warnert
on November 17, 2008 at 11:24 AM
Why does the sign say "In one cricket, 100 grams." That would probably be more like 20 crickets, wouldn't it?

Also, a reason why insects haven't been accepted into the diet of our Judeo-Christian culture is because they are not kosher.
Leave a Reply: