Bug Squad
sitenum=63
Happenings in the insect world
Tiger by the Tail? Not This Time!

Don't look now, but a garden spider almost grabbed a tiger by the tail.

The tiger? That would be the Western tiger swallowtail, Papilio rutulus.

The ragged wings of the butterfly (below) show signs of a close encounter with a predator--maybe another spider, a praying mantis or a bird.

The Western tiger swallowtails are drop-dead gorgeous. Sporting a yellow-and-black wingspan of 2.75 to 4 inches (when not tattered by a predator!), these butterflies attract attention as they glide around gardens and parks and in riparian forests.

This is one of the butterflies that distinguished scientist Arthur Shapiro, professor of evolution and ecology at UC Davis studies. Check out his amazing butterfly website.

LiveScience, in partnership with the National Science Foundation, recently showcased him in a feature story, "Passion for Butterflies Becomes a Study in Climate Change Impact."

You'll want to read how Shapiro first became involved in the wonderful world of butterflies, and how that passion led to a massive butterfly data collection he launched more than 40 years ago.

"Through phylogeography, Shapiro is trying to reconstruct the history of the high-mountain butterfly faunas both on the West coast of North America and in the southern parts of South America, such as Argentina and Chile," Kravtz wrote. "By reconstructing the history of these faunas, where they came from, how they moved and when, scientists and researchers can make predictions as to how the fauna will respond to climate change in the future."

And, as Shapiro told Kravtz: "The past is the key to the future."

Indeed it is. And that would include the comings and goings of the Western tiger swallowtail. 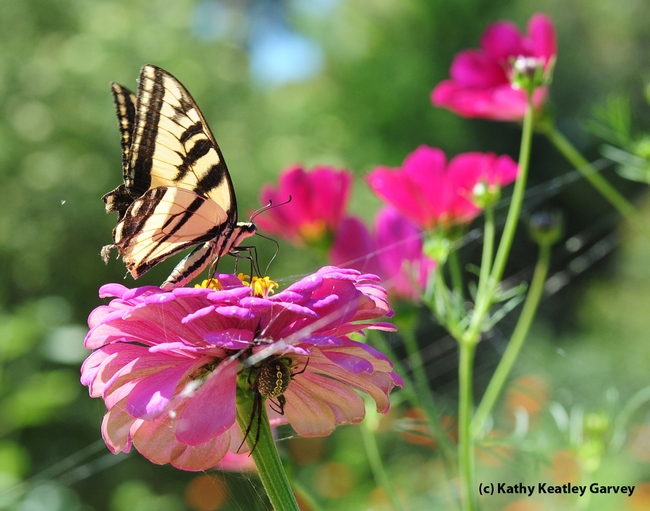 Western tiger swallowtail, Papilio rutulus, nectars on a zinnia, unaware of the danger lurking below. (Photo by Kathy Keatley Garvey) 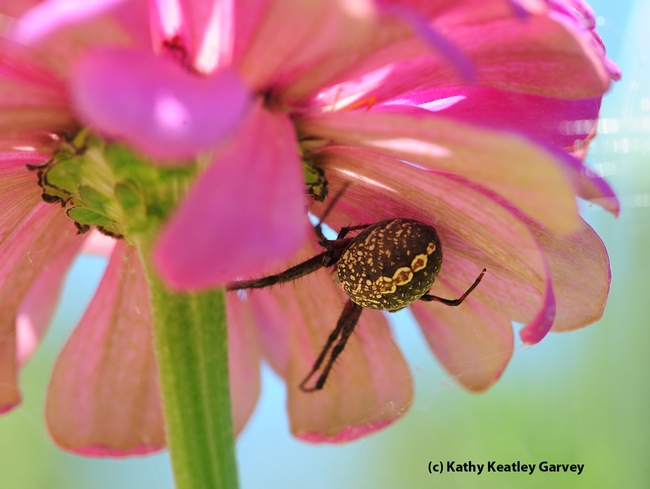