It's good to see UC Davis research entomologist William "Bill" Reisen named the recipient of the coveted Harry Hoogstraal Medal, to be awarded Nov. 11 in Atlanta, Ga. at the 61st annual meeting of the American Society of Tropical Medicine and Hygiene (ASTMH).

Interestingly enough, Reisen actually met parasitologist-entomologist Hoogstraal (1917-1986), in Cairo in the early 1980s. Hoogstraal was a global authority on ticks and tick-borne diseases, while Reisen is internationally renowned for his comprehensive research on mosquitoes, especially those that transmit encephalitis and West Nile virus.

It's quite an honor to be named the recipient of the Harry Hoogstraal Medal. Reisen is the seventh University of California medical entomologist to receive the award since it was first presented in 1987. Other are: Bruce Eldridge, UC Davis, 2007; Robert Washino, UC Davis, 2005; John Edman, UC Davis, 2004; A. Ralph Barr of UCLA, 1995; Thomas H. G. Aitken, UCLA, 1993; and William C. Reeves, UC Berkeley, 1987.

Reisen's current research targets the population ecology of Culex tarsalis and other mosquitoes and their vertebrate hosts in relation to the epidemiology, surveillance and control of arboviruses in California.

The news media can always count on Reisen for his mosquito expertise, his dedication, his down-to-earth manner, and his well-honed sense of humor.

His mosquito research has drawn him all over the world.  As a captain in the U.S. Air Force, he served as a vector-borne disease surveillance and control officer based in Manila and then Clark Air Base, the Philippines, and conducted disease and vector surveys in Korea, Okinawa, Thailand, and Guam.

Following his military service and graduation from the University of Oklahoma, Reisen  worked as a an assistant professor of international medicine at the University of Maryland's International Center for Medical Research and Training at Lahore, Pakistan where he conducted research on the bloodfeeding behavior of anopheline mosquitoes (which transmit malaria) and took part in experiments using sterilized male mosquitoes released as a control mechanism as well as studies on mosquito population ecology in relation to pathogen transmission.

Highly honored for his work, Reisen received the American Mosquito Control Association's 2006 John N. Belkin Award for Excellence in Vector Ecology, the 2006 Distinguished Service Award from the Society for Vector Ecology (SOVE), and the 2001 Lifetime Award for Achievement in Medical Entomology from the SOVE International Congress. He was selected a fellow of the Entomological Society of America (ESA) in 2003. His awards also include the 2004 UC Davis Academic Federation Award for Excellence in Research.

The award nominators noted that "Bill Reisen's career epitomizes the description of this award, spanning over forty years during which he has published over 260 peer-reviewed publications and book chapters in the field of medical entomology, served on countless research grant review committees focusing on medically important arthropod vectors and/or disease agents, and served extensively on medical entomology editorial boards. He has also received many competitive research awards himself from national and international research funding agencies. He has also guided the careers of a number of MS and PhD students and post-doctoral fellows. We cannot think of any individual who would qualify more as having made an outstanding contribution to the field of medical entomology."

If you want to read more about his spectacular career that spans more than four decades, check out the UC Davis Department of Entomology website.

As an aside, it's also quite fitting that this Air Force veteran will be honored with the Harry Hoogstraal Medal on Nov. 11, Veterans' Day. 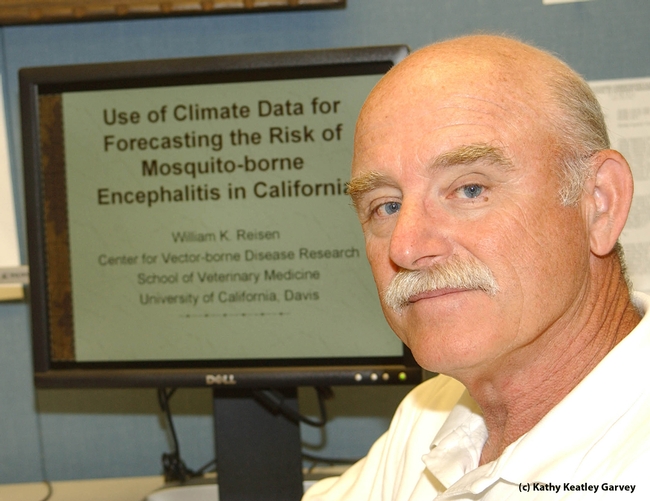 UC Davis research entomologist William Reisen. (Photo by Kathy Keatley Garvey)
Tags: Harry Hoogstraal Medal (1), William Reisen Center for Vectorborne Diseases (1)
Comments: 1
Comments:
by Jim Gonsman
on October 2, 2012 at 6:09 PM
There is scientific talk from time to time that insects bearing diseases that infect humans should be completely eliminated. I'm hoping that Reisen is not one of them but rather is focused on research to develop vaccines and behavior strategies that will enable us to cope with these insects without further damaging valuable ecosystems.
Leave a Reply: