Art Shapiro
The Gulf Fritillary is as fascinating as it is amazing.

The showy reddish-orange butterfly (Agraulis vanillae) is making a comeback in the Sacramento-Davis area. In the early 1970s, it was considered extinct in that area.

“It first appeared in the vicinity of San Diego in the 1870s,” says noted butterfly expert Art Shapiro, distinguished professor of evolution and ecology at the University of California, Davis, and a member of the UC Davis Center for Population Biology. “It spread through Southern California in urban settings and was first recorded in the Bay Area about 1908. It became a persistent breeding resident in the East and South Bay in the 1950s and has been there since.”

Shapiro describes the Gulf Fritillary as  “one of the most widespread weedy butterflies in the Americas." However, he points out, it has no “native host plant in California."

Those who want to attract the Gulf Frit can do so by planting its host plant, passion flower vine (tropical genus Passiflora). The butterflies lay their eggs on the plant and voila! Leaf-munching caterpillars. Shapiro points out that the Gulf Frit caterpillars "will not eat all of the Passiflora in cultivation in California." They can be particular.

The Gulf Frit  "has no diapause and is subject to killing out by hard freezes; in my experience, 22F is completely lethal to all stages," Shapiro says. "It has been bred for release at weddings, garden parties and the like, but there is no direct evidence linking its return in this region to such activities. If gardeners find it a pest on their Passifloras it is easily controlled by hand-picking or BT (Dipel), but it seems, to judge by my email, that most people are thrilled and delighted to have it in the garden."

Shapiro and two co-authors recently published a paper in the Journal of Biogeography (J. Biogeog.39: 382-396, 2012) on the pylogeography (geography of molecular-genetic variation) of widespread Western Hemisphere human-associated butterflies. The reearch is the work of Erik Runquist, UC Davs Department of Evolution and Ecology; Matthew Forister of the Department of Biology, University of Nevada; and Shapiro.

"We had suspected the Gulf Frit might be introduced in the United States but the genetics show not only that it is not, but that it is apparently two species--one entirely South American and one North American--but we have made no move to name anything!"

It's interesting that another host specialist butterfly, Cacyreus marshallili, a native of South Africa, is becoming a pest of garden geraniums (Pelargonium) in Europe, where "there are no native Pelargoniums," Shapiro says.  "The butterfly (known as the Geranium Bronze) is becoming a real threat to the tradition of having geraniums in window boxes. Some European butterfly folks like its presence--unless they grow geraniums." 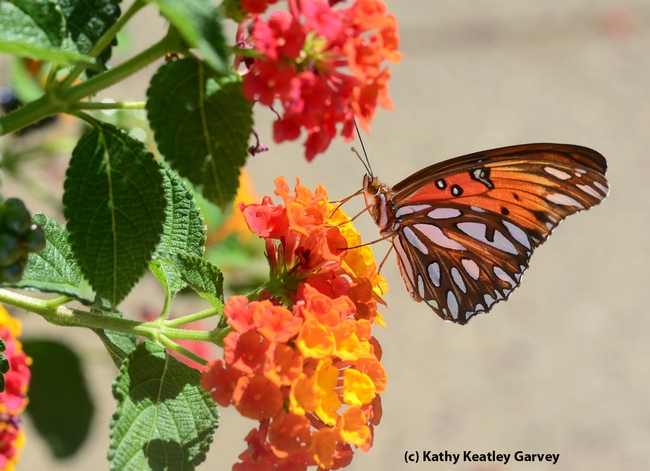 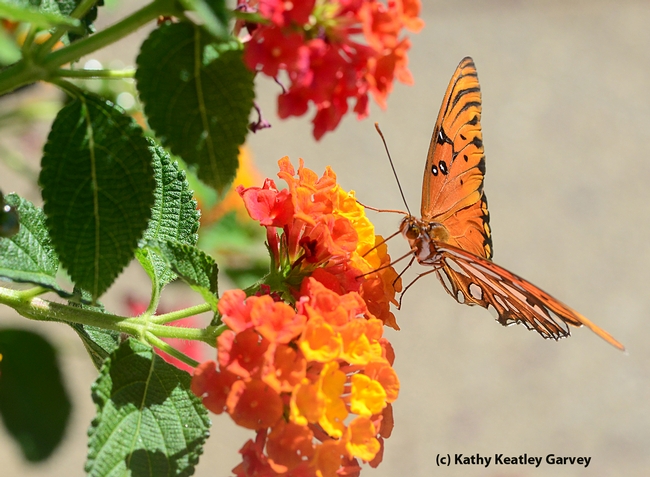 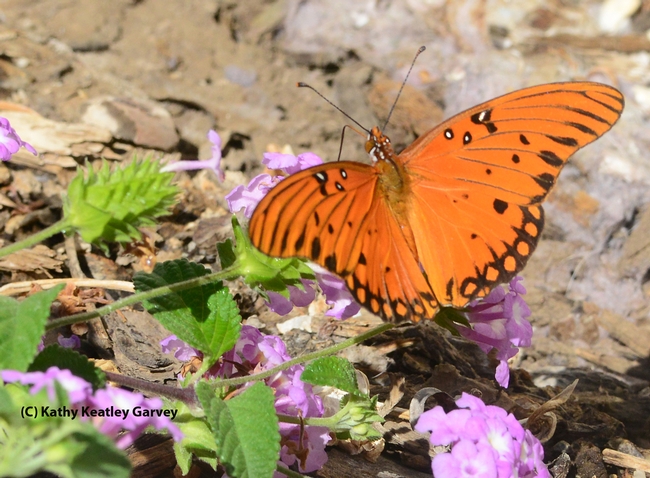 Gulf Fritillary spreading its wings on lantana. (Photo by Kathy Keatley Garvey)
Tags: Agraulis vanillae (79), Art Shapiro (242), Gulf Fritillary (59)
Comments: 12
Comments:
by Jim Gonsman
on October 4, 2012 at 8:06 AM
Thank you.
by Rico M.
on October 8, 2012 at 1:44 PM
First time ever seeing Gulf Frits in my North Stockton, Ca garden a few days ago. 3 adults were all over the Passion Vines (P. incarnata) I had planted over 7 years ago. There must be hundreds of eggs deposited in just a few days time. It's very exciting & I love this most rare vistor to our garden ;)
Reply by Kathy Keatley Garvey
on October 8, 2012 at 2:33 PM
Nice! Glad to hear you have these little visitors!
by Elisa V
on September 11, 2013 at 1:41 PM
I have at least 20 caterpillars of this butterfly on my Passion flower vine on my back yard right now!, I live in Roseville, California, I'm just amaze to see the orange butterflies dancing on my back yard! I'm loving it!
by Anne E. Schellman
on September 20, 2013 at 1:34 PM
Hi Kathy I love your blog! I was very excited to have been gifted a "found" dead Gulf Frit for my bug collection by Ellen Z.
by Kirsten
on October 24, 2013 at 10:25 AM
I am so glad to know what has been bringing smiles in our backyard! We live in Rancho Cordova and have had passion flower vines for the past 7 years and have spotted one or two butterflies a year in the yard. In the past two weeks we suddenly have dozens and dozens of chrysalis' ! I thought they were viceroy but that just wasn't matching the description.
I'm not sure what their odds of survival are but I have picked up about 15 off the ground who were never able to fly. I tried giving them some sugar water on a q-tip and about 4 regained strength and were able to fly away but the others have died.
Do you have any tips on helping our friends? What is their expected life time as a butterfly?
Thanks.
by Kathy Keatley Garvey
on October 28, 2013 at 10:58 AM
Hi, Kirsten. Thank you for your email. We consulted butterfly expert Art Shapiro, distinguished professor of evolution and ecology, UC Davis, for his response: "First off, Viceroys aren't found anywhere in CA except down in the extreme SE corner, in desert-wash riparian habitat.
Second, it's highly abnormal that any significant proportion of Gulf Frits would be unable to fly. If the pupae are not disturbed they hang vertically. The butterfly pops out and hangs on the bottom of the cast pupal skin, letting gravity pull down the wings so they elongate fully. If the bug is knocked down while the wings are soft and cannot immediately climb up a vertical surface, it will end up a cripple. The pupae should never be removed from their substrate and laid horizontally in a container. That virtually guarantees crippling. If there was no disturbance and all those animals fell down spontaneously, they are infected with some microorganism that has significantly weakened them. Any butterfly that is unable to fly is a lost cause and there is really no reason to try to save them since they won't reproduce. If a crippled female was mated by a flying male, which is possible, she wouldn't be able to lay her normal complement of eggs on the host plant anyway...
Adult Gulf Frits, which are pretty unpalatable to predators (they have chemical defenses), are quite long-lived. In warm weather they can live 4-6 weeks. In cold weather they can live 2-3 months, but are killed outright at 21-22F.
For the record, butterflies have sugar receptors on their feet. When the feet contact sugar, the proboscis uncoils automatically for feeding. If it's necessary to feed a butterfly, place watered-down honey--not much--or Pepsi or Coke right out of the container--on a fairly non-absorbent surface (I use a strip of foam rubber) and, using forceps to hold the wings over the back, lower the feet to the liquid. Bingo! Allow to feed ad lib."
by Laura Rose
on September 4, 2018 at 6:50 PM
Will my passaflora survive all these gulf frits in the making. Anything I can do to help it along to continue providing for them?
Laura - Carlsbad- San Diego
by Bino Herrera
on October 2, 2018 at 4:56 PM
I have the Maypop and Purple Passionvine, which is working well as a host plant for the Gulf Frit. I recently bought a Red Passionvine and then read it is poisonous to the Gulf Frit. Is it true.
B
by Toby Lustig
on October 11, 2020 at 4:17 PM
Beautiful one in the lantana in our Walnut Creek, CA backyard.
by Becky
on August 6, 2021 at 12:01 PM
Wish I could post a photo, but quite certain the perky and seemingly happy butterfly that has been visiting my Lantana here in Napa every day is a Gulf Fritillary. So pretty! Delighted to finally know what to call her/him.
by Becky
on August 6, 2021 at 12:01 PM
Wish I could post photo, but quite certain the perky and seemingly happy butterfly that has been visiting my lantana here in Napa every day is a Gulf Fritillary. So pretty! Delighted to finally know what to call her/him.
Leave a Reply: