Bug Squad
sitenum=63
Happenings in the insect world
What a Buzz!

Right out of Champaign, Ill., comes a research story about honey bees on coke.

University of Illinois entomology and neuroscience professor Gene Robinson and his colleagues have found that honey bees on cocaine dance more.

"In a study that challenges current ideas about the insect brain, researchers have found that honey bees on cocaine tend to exaggerate," wrote Diana Yates, life sciences writer at the University of Illinois at Urbana-Champaign in a Dec. 23 press release.

"Normally, foraging honey bees alert their comrades to potential food sources only when they've found high quality nectar or pollen, and only when the hive is in need,"  she wrote. "They do this by performing a dance, called a 'round' or 'waggle' dance, on a specialized 'dance floor' in the hive. The dance gives specific instructions that help the other bees find the food.

"Foraging honey bees on cocaine are more likely to dance, regardless of the quality of the food they've found or the status of the hive, the authors of the study report."

Scientists, led by Robinson, dabbed a low dose of cocaine on the bees' backs before they went out foraging. The Journal of Experimental Biology published the findings this month. Robinson, who calls the bee dance "one of the seven wonders of the animal behavior world," said the research also supports the idea that in certain circumstances, honey bees, like humans, are motivated by feelings of reward.

"Cocaine – a chemical used by the coca plant to defend itself from leaf-eating insects – interferes with octopamine transit in insect brains and has undeniable effects on reward systems in mammals, including humans. It does this by influencing the chemically related dopamine system," Yates wrote.

"Dopamine," she explained, "plays a role in the human ability to predict and respond to pleasure or reward. It is also important to motor function and modulates many other functions, including cognition, sleep, mood, attention and learning."

Well, when you consider the powerful effect of cocaine on humans, the bee research isn't all that surprising.

But this is NOT the reason for colony collapse disorder (CCD), in which bees mysteriously abandon the hive, leaving behind the immature bees and stored food.

Can't you just see it?

And, Crystal Boyd's happiness comment will take on new meaning:

To see a waggle dance, sans cocaine, access this video on You Tube. 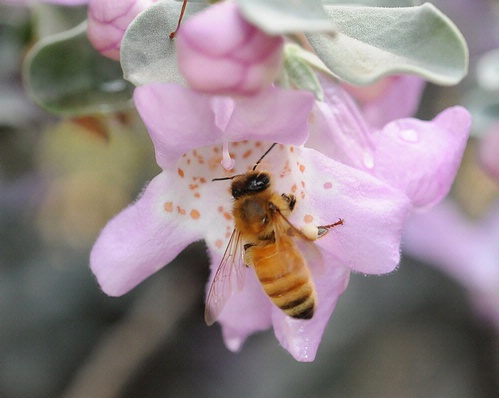