Bug Squad
sitenum=63
Happenings in the insect world
Bring on the Tourists!

Billy Krimmel (Photo by Kathy Keatley Garvey)
It's a case of a sticky situation benefitting a plant.

Or more precisely, dead fruit flies or carrion on a tarweed plant can benefit the plant in more ways that most people would ever think about, say researchers in the UC Davis Department of Entomology.

When the hairs of a “sticky plant” trap small insects or “insect tourists,” the “tourist trap” provides food for other predators, thus becoming a defensive mechanism that spares the plant from increased herbivore damage. Other beneficial results include greater plant fitness and increased fruit production.

“Sticky plants-- those producing resinous, oily or hooked trichomes (hairs)--often entrap small insects that land on them as they pass by,” Krimmel said. “This insect carrion functions as a type of plant-provided food for defense.”

“This is the first example of such a plant-provided food being captured from the external environment,” Krimmel said. “We coined the term 'tourist trap', referring to the sticky hairs that catch insect passers-by.”

In their research, “Sticky Plant Traps Insects to Enhance Indirect Defence,” published in the journal Ecology Letters, the ecologists revealed that the trapped insect tourists “increased the abundance of a suite of predators, decreased herbivory and increased plant fitness.”

Later the journal Nature focused on the Krimmel-Pearse research in its ecology section: "When Plants Run the Food Chain."

"We have known for a long time that carnivorous plants entrap insects for their own benefit,” Pearse said. “In our current study, we found that the entrapment of insects by plants might be even more important and general than previously thought."

Krimmel and Pearse conducted their research in the Stebbens Cold Canyon Reserve, a UC Davis Nature Reserve located in Solano County, near the outlet of Lake Berryessa. Their sticky plant was tarweed (Madia elegans), an annual flowering California native plant in the family Asteraceae. It generally flowers in mid to late summer, from approximately June through September.

At our study site, tarweed's major herbivore is the specialist caterpillar Heliothodes diminutiva, which feeds largely on plant reproductive organs and can completely sterilise its host plants,” they wrote.  The adult owlet moth, Heliothodes diminutive,  lays its eggs on the developing buds. The emerging caterpillars can quickly devour all the flowers and buds.

Krimmel and Pearse chose 82 tarweed plants for their experiment. They placed dead Drosophila fruit flies to half of them, five flies per week through the growing season, and then monitored all the plants throughout the growing season.

“Because tarweed is a small, annual plant, we were able to do full counts of arthropods on all plants each week, and measure lifetime fruit production by the plants, allowing us to relate our experimental treatment to plant lifetime fitness,” the authors wrote.

“The addition of 5 dead fruit flies (carrion) to plants each week over the growing season increased the abundance of all surveyed predatory arthropods associated with M. elegans plants by 76 percent to 450 percent,. For P. spinoicollis, the most abundant predator, this effect was strongest during the early growth season in June and July.”

Specifically, “the addition of carrion (fruit flies) to M. elegans plants produced a 60 percent decrease in bud damage caused by H. diminutiva, the dominant lepidopteran herbivore in this system and increased lifetime fruit production by 10 percent,” the researchers said. 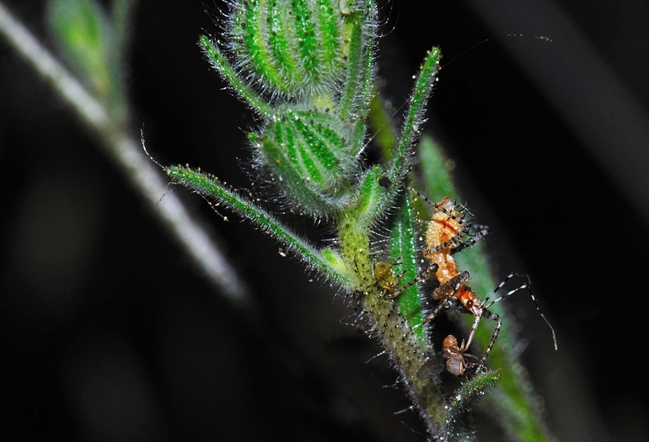 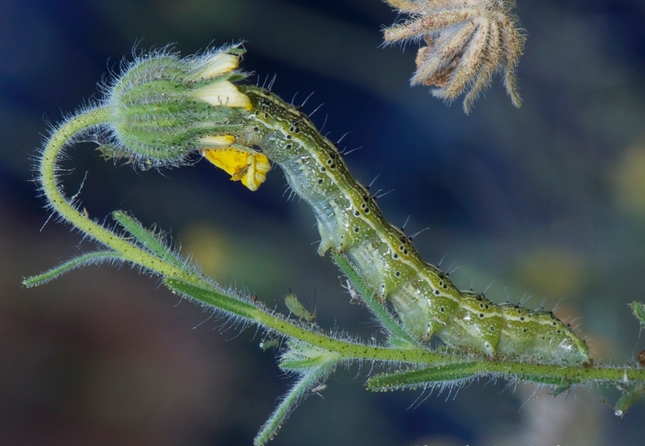