The alfalfa weevil complex, comprised of the Egyptian alfalfa weevil, Hypera brunneipennis, and alfalfa weevil, Hypera postica, is the most damaging arthropod complex in California alfalfa (Medicago sativa).  If populations of alfalfa weevil are left unchecked, the larvae can cause severe defoliation, significantly reducing yields.  Repeated use of insecticides such as organophosphates and carbamates has resulted in these insecticides being detected in surface waters, providing incentives to find alternative means to manage this pest. The alfalfa weevil is susceptible to the biological control agent Bathyplectes curculionis in many alfalfa-growing regions in the United States. Work done in 2004 and 2005 by Karey Windbiel (Grad Student of Larry Godfrey, UC Davis - Entomology) in various counties in California (including one location in Blythe) showed that overall percent parasitism was low in 2004 (8.2%) and 2005 (22.5%).  However, during Windbiel’s studies to evaluate parasitism by wasps it was found that a large number of alfalfa weevils were parasitized by the entomopathogenic fungus Zoophthora phytonomi which accounted for 84.3% of the total alfalfa weevil larvae parasitized in 2005.  This was close to the 97% parasitism of larvae by B. curculionis found in 2004.

Entomopathogenic fungi kill the insect by first adhering the fungal spore to the insects outer surface (cuticle) and, under appropriate conditions, it germinates; the germ tube penetrates the cuticle of the host and enters the blood (hemocoel). Vegetative structures multiply in the hemocoel of the insect, often in the form of yeast-like hyphal bodies that reproduce by budding.  As the hemocoel becomes filled with hyphal bodies, the insect usually dies, and the fungus continues to develop saprophytically.  After the body of the dead insect is filled with mycelia, fruiting structures emerge from the cadaver and produce infectious spores. At this point the dead insect has the consistency of a moist loaf of bread and, depending on the color of the spores or conidia, may appear pale orange in color.

Sampling of alfalfa weevils in the past has revealed that a significant number of larvae were found to be pale orange in color compared to their normal green color.  It was determined that the alfalfa weevils were actually infected with the entomopathogenic fungus Z. phytonomi. Zoophthora phytonomi was not released for alfalfa weevil control, but originated as a pathogen of the clover leaf weevil.

The entomopathogenic fungus does not always appear to affect insect populations. During drier periods, the fungi will persist primarily in alfalfa fields in the soil environment as resting spores until conditions arise to initiate germination (sporulation). Resurgence of an entomopathogenic fungi that can kill large numbers of insects is called an epizootic event.  Germination of spores occurs when environmental conditions such as heavy rainfall, cooler temperatures and high relative humidity are present.

Studies have shown the average time necessary for the weevil larval cadavers to produce Z. phytonomi  infectious spores and infect other larvae was 6.8 hours when humidity was high, but conidial sporulation can occur in as little as 3 hours with a relative humidity of ≥91%.  Relative humidity is usually greatest in the early morning hours in field conditions, most likely the time when sporulation and spreading of conidia occurs. Once the alfalfa weevil is infected with spores of Z. phytonomi, death occurs within days.

Alfalfa weevil does not reach economically damaging levels every year, so growers will need to rely on scouting to determine if their fields contain significant weevil populations.  As thresholds are approached (20/sweep), monitor every 2 - 4 days to determine if populations decline or a treatment is required. If a significant number of weevil larvae appear orange to pale yellow in color, then entomopathogenic fungi are present in the alfalfa weevil population.  Do not include infected weevil larvae in your counts to determine the economic threshold since these infected weevils will soon be dead.  Presence of the entomopathogenic fungus may be able to maintain weevil populations below the economic threshold and therefore not require chemical management. To read more articles like this go here, http://ucanr.edu/postings 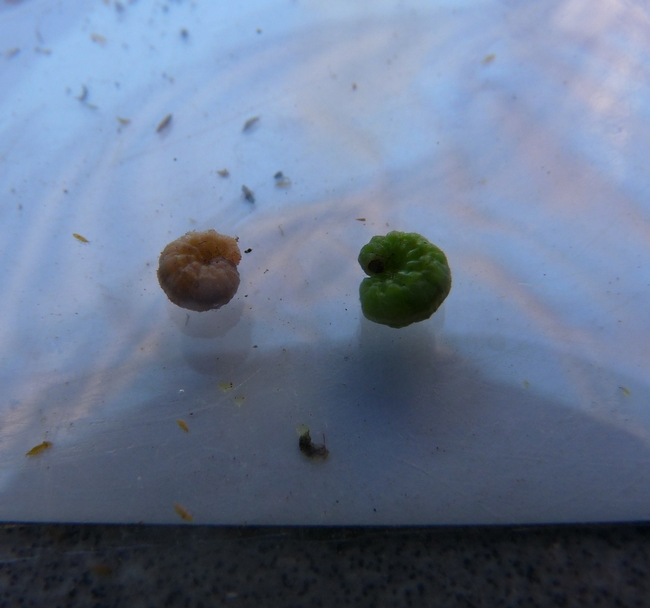