It's good to see that the Xerces Society for Invertebrate Conservation and noted bumble bee expert Robbin Thorp of UC Davis have filed a petition with the U.S. Fish and Wildlife Service for Endangered Species Act protection for the beleagured rusty-patched bumble bee.

In a recent press release, the Xerces Society related that the rusty-patched bumble bee, (Bombus affinis), "has disappeared from 87 percent of its historic range (which once included 25 states). Where it is still found, this bee is much less abundant than it was in the past."

“The charismatic and once common rusty patched bumble bee has suffered severe and widespread declines throughout its range in the eastern U.S. since 1997," Thorp said. "The few scattered recent sightings thanks to intensive searches are encouraging, but the species is in critical need of federal protection.”

Why has the population of the rusty-patched bumble bee declined? Good question, and one with no fully determined answer, according to Thorp and Sarina Jepsen, the Xerces Society's endangered species program director.

"However, in related bumble bees that also are declining, researchers at the University of Illinois have recently found higher levels of a fungal pathogen and lower levels of genetic diversity," Jepson wrote in a press release. "Notably, the rusty-patched bumble bee was too scarce in the landscape to be included in these analyses."

"The leading hypothesis," Jepson says, "suggests that this fungal pathogen was introduced from Europe by the commercial bumble bee industry in the early 1990s, and then spread to wild pollinators. Although it has not been proven, the hypothesis is supported by the timing, speed and severity of the decline—a crash in laboratory populations of bumble bees occurred shortly before researchers noticed a number of species of formerly common bumble bees disappearing from the wild."

Meanwhile, we hope that Bombus affinis doesn't go the way of Bombus franklini.

As the Xerces Society's press release points out: "Pollinators are critical components of our environment and essential to our food security—providing the indispensable service of pollination to more than 85 percent of flowering plants and contributing to one in three bites of the food that we eat. Bumble bees are among the most widely recognized and well understood group of native pollinators in North America and contribute to the pollination of food crops such as squash, melon, blueberry, cranberry, clover, greenhouse tomato and greenhouse pepper, as well as numerous wildflowers."

Read more about this bumble bee from the Xerces website. And why researchers call the declining bumble bee population "alarming."

The Xerces Society, an international organization founded in 1971 and headquartered in Portland, Ore., is a nonprofit organization that "protects wildlife through the conservation of invertebrates and their habitat" and "is at the forefront of invertebrate protection worldwide, harnessing the knowledge of scientists and the enthusiasm of citizens to implement conservation programs." 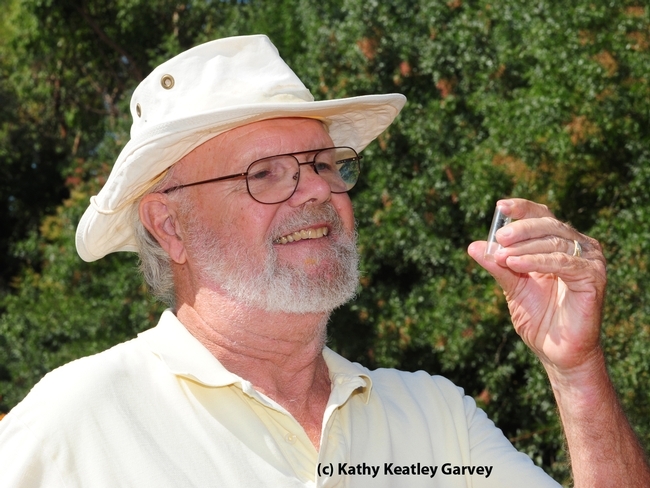 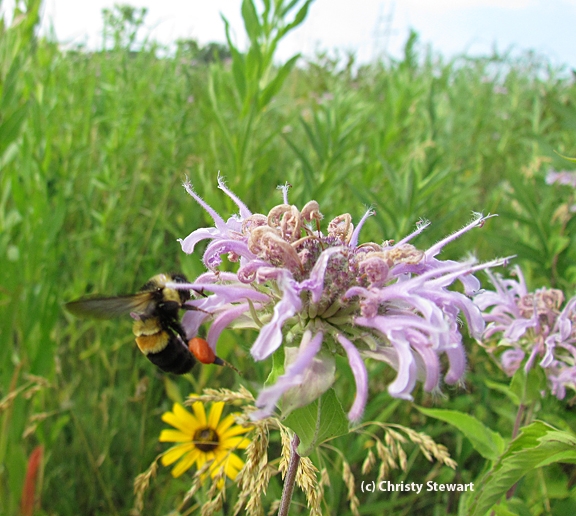 This photo of the rusty-patched bumble bee is the 2012 work of Christy Stewart at the Pheasant Branch Conservancy in Wisconsin.
Tags: Bombus affinis (2), Robbin Thorp (262), rusty-patched bumble bee (3), Xerces Society (31)
Comments: 2
Comments:
by Kathy Buell
on April 16, 2013 at 8:31 PM
There is a strange and beautiful bumble bee squad nesting in the old bird house on my porch. It has a rust band, yellow and black. I looked it up and it may be the rusty patch bumble bee. I've never seen one before. Apparently they are declining. What can I do to protect or encourage it? I know nothing about bees. I may contact a local beekeeping supply store here in Gladstone Oregon. We are near Portland. Maybe the Xerces society here in Portland would like to know? Please advise. Thank you
by Drew Dixon
on April 21, 2015 at 3:49 PM
I know this article is a little dated... Hopefully, someone sees this. I can confirm the existence of these bees in northern Colorado. Being from Georgia, I had never seen them before and was surprised to learn that in Georgia I should have seen them- but not necessarily so in Colorado. Email me at Drewdixon89@gmail.com for more info, I just want to pass along the message that they have been found! :)
Leave a Reply: