Robert E. Page, Jr.
The Spirit of the Hive: The Mechanisms of Social Evolution.

That's the title of a newly published book written by Robert E. Page Jr., one of the world's foremost honey bee geneticists.

In his 224-page book, published by Harvard University Press, Page sheds light on how 40,000 bees, "working in the dark, seemingly by instinct alone, could organize themselves to contstruct something as perfect a a honey comb."

Page, former professor and chair of the UC Davis Department of Entomology, marvels at how bees can accomplish these incredible tasks. In synthesizing the findings of decades of experiments, he presents "a comprehensive picture of the genetic and physiological mechanisms underlying the division of labor in honey bee colonies and explains how bees' complex social behavior has evolved over millions of years," according to the Harvard University flier.

In his book, Page talks about  the coordinated activity of the bees and how worker bees respond to stimuli in their environment.  The actions they take in turn alter the environment, Page says,  and "so change the stimuli for their nestmates. For example, a bee detecting ample stores of pollen in the hive is inhibited from foraging for more, whereas detecting the presence of hungry young larvae will stimulate pollen gathering."

Division of labor, Page says, is an inevitable product of group living because "individual  bees vary genetically and physiologically in their sensitivities to stimuli and have different probabilities of encountering and responding to them."

Page, who received his doctorate in entomology at UC Davis in 1980, served as an assistant professor at  Ohio State University before joining the UC Davis Department of Entomology in 1989. He chaired the department for five years, from 1999 to 2004.

In 2004--the year Page retired from UC Davis--ASU recruited him as the founding director and dean of the School of Life Sciences. At the time, his duties included organizing three departments—biology, microbiology and botany, totaling more than 600 faculty, graduate students, postdoctoral fellows and staff--into one unified school.

As its founding director, Page established the school as a platform for discovery in the biomedical, genomic and evolutionary and environmental sciences. He also established ASU’s Honey Bee Research Facility.

Add this one to the list: The Spirit of the Hive. 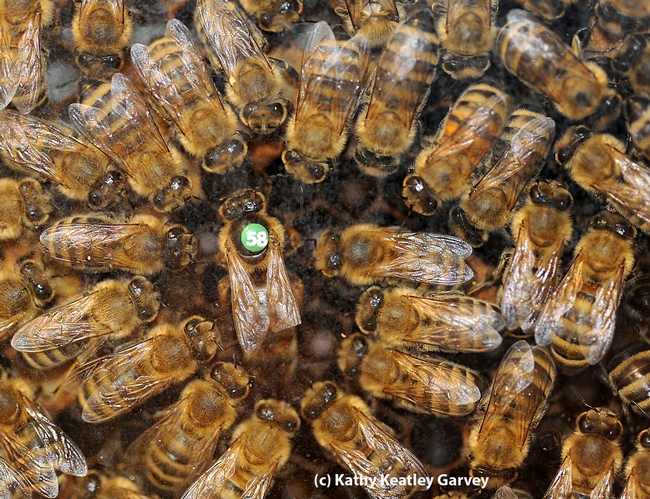 The queen and her court. (Photo by Kathy Keatley Garvey) 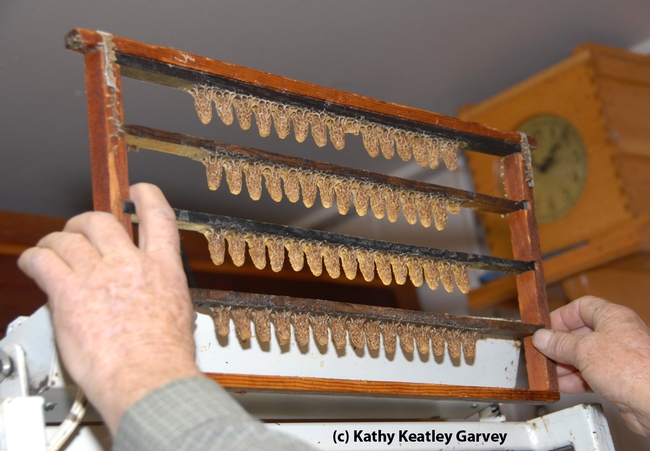