Today (Labor Day) began just like any other day.

And it ended just like any other day, except for the Labor Day celebrations that we humans plan.

For Nature's predators and prey that frequent our garden, however, it was an intertwining of life and death.

A western spotted orb weaver, Neoscona oaxacensis, spun a web on our tower of jewels, Echium wildpretii, and snagged, killed and wrapped a honey bee. Using the web as its lifeline, it tugged the bee into the shadows to eat it, undisturbed.

The tower of jewels, in bloom now for five months, looks like a tower of bees when the honey bees, syrphid flies, and carpenter bees share it. The plant is looking a little ragged now--it's going to seed--but it's still producing spectacular reddish-pink blossoms.

The spiders know where to spin their webs. They will be back tomorrow, as will the honey bees. 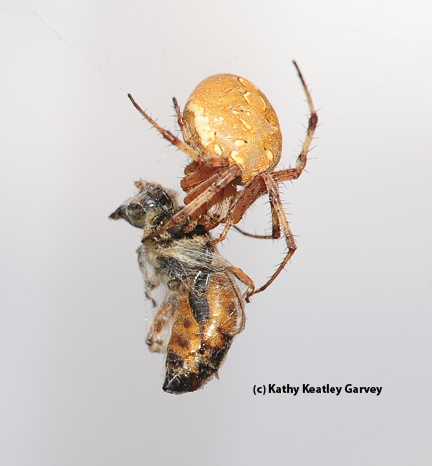 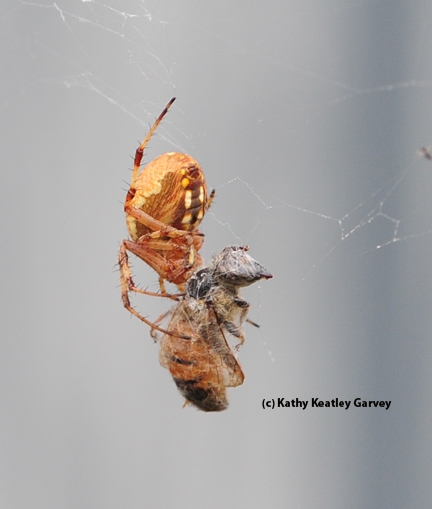 The spider's spots are visible in this photo. (Photo by Kathy Keatley Garvey) 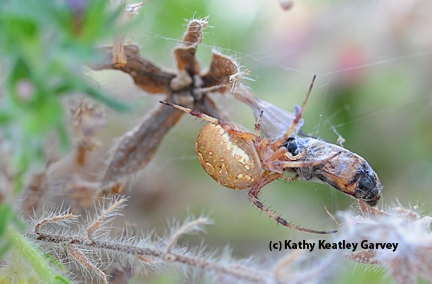 After tugging the honey bee into the tower of jewels, the spider proceeds to eat it. (Photo by Kathy Keatley Garvey) 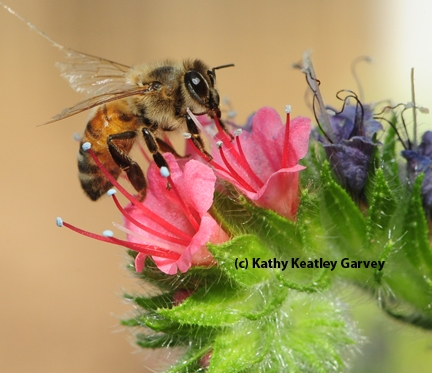 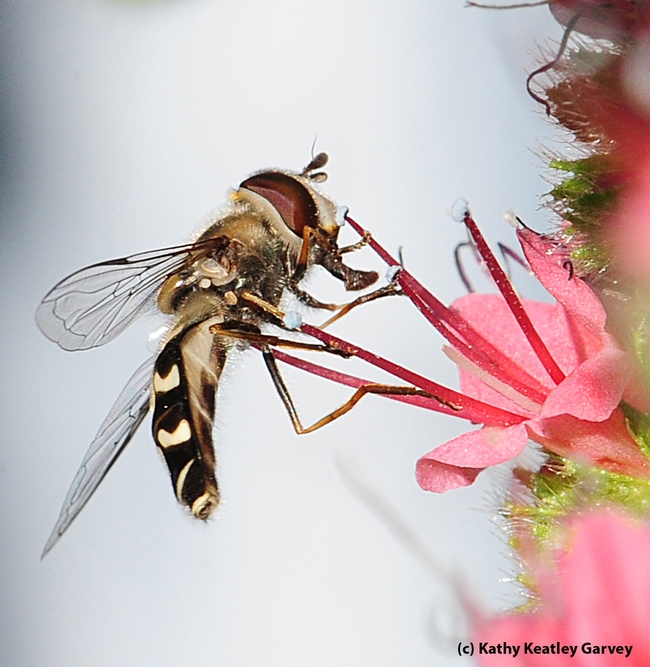 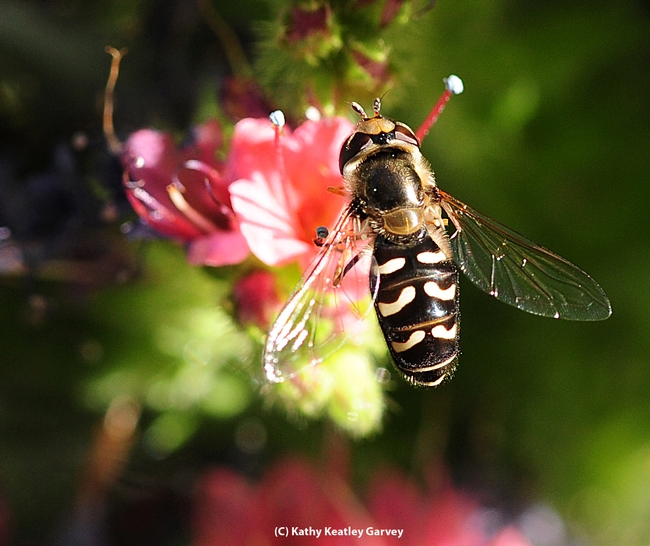 When there's so much pain, grief and sorrow in the world, it's time to shut off the TV, log off the computer, exit the house, and photograph honey bees.

Watching honey bees foraging in the tower of jewels, Echium wildpretii, is therapy enough. They are sisters, sisters with a job to do, and so little time to do it. Buzzing from one blossom to another, gathering nectar and pollen, they are a symphony of color, grace and sound, unlike the cacophony that savagely screams from the 10 o'clock news.

"The murmuring hum of bees on a warm afternoon is surely part of everyone's mental picture of a perfect summer day," write Christopher O'Toole and Anthony Raw in their book, Bees of the World. "But that relentless hum, soporific perhaps, to the idling human, is in reality the produce of a machine-like urge to work--to work against the clock of the seasons, to gather enough pollen and nectar before the weather breaks, before the blooms fade."

What they do every day is for the greater good--the good of the colony. They set an example that the human race should follow.

Yet the winter of 2012-2013 may prove to be the worst yet for the declining bee population, according to Extension apiculturist Eric Mussen of the UC Davis Department of Entomology.

Meanwhile, we all need to bee-lieve that the worst is over.

In more ways than one. 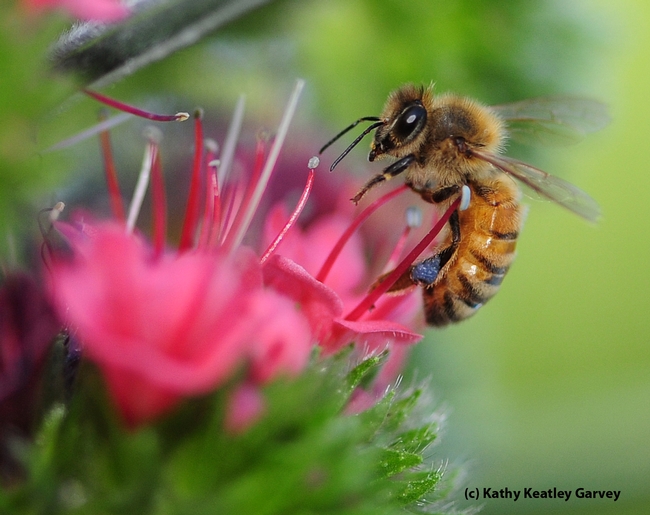 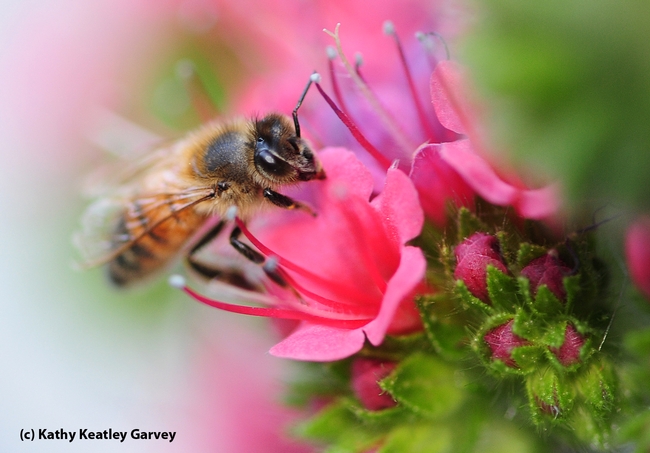 Almost like a painting, this photo of a honey bee contributes to the softer side of life. (Photo by Kathy Keatley Garvey) 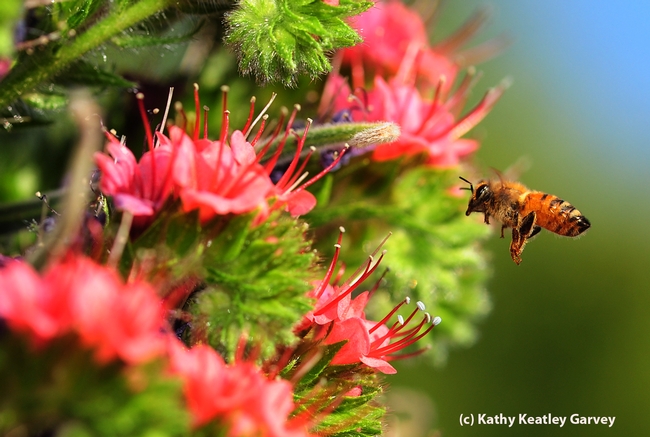 Tower of jewels. (Photo by Kathy Keatley Garvey)
If you're growing a tower of jewels (Echium wildpretii) in your yard, you won't need a stop sign or a traffic light to encourage vehicles to slow down--they will automatically when they see this spectacular plant.

it's a traffic stopper.

The plant, reminiscent of a Christmas tree, attracts not only vehicular and foot traffic, but honey bees, bumble bees and hummingbirds. It's basically a tower of bees when it blooms.

The one in our yard is about eight feet tall. Honey bees, eager for the nectar and pollen, keep creating traffic jams. If you sit and watch them, you'll see them constantly bumping into one another as they forage for food.

No wonder it's a favorite of beekeepers.

The species, a biennial, is native to the Canary Islands. It's endemic to the island of Tenerife.

Last year several towers of jewels bloomed near Storer Hall on the University of California, Davis campus, and a couple of others graced the Häagen-Dazs Honey Bee Haven, a bee friendly garden on Bee Biology Road, about a mile west of the central campus.

The UC Davis Arboretum Teaching Nursery sells these at their plant sales, but they go fast, says Ellen Zagory, the arboretum's director of horticulture. "We don't have any left," she said. 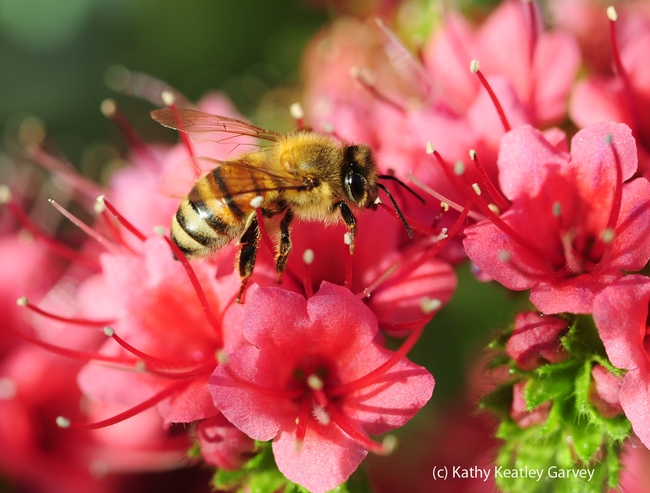 Honey bee foraging in a tower of jewels. (Photo by Kathy Keatley Garvey) 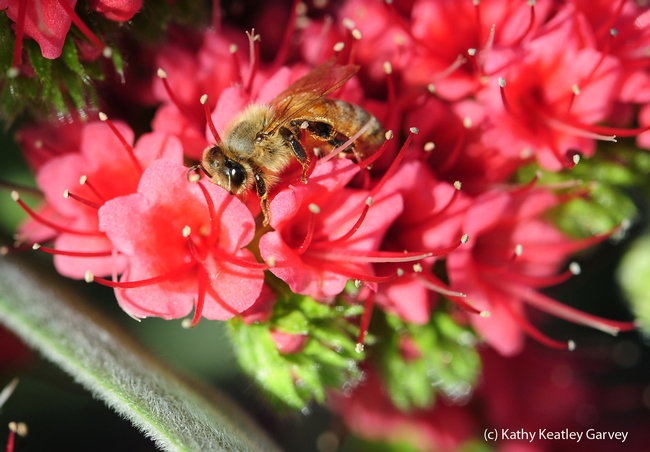 Honey bee gets down to business. (Photo by Kathy Keatley Garvey) 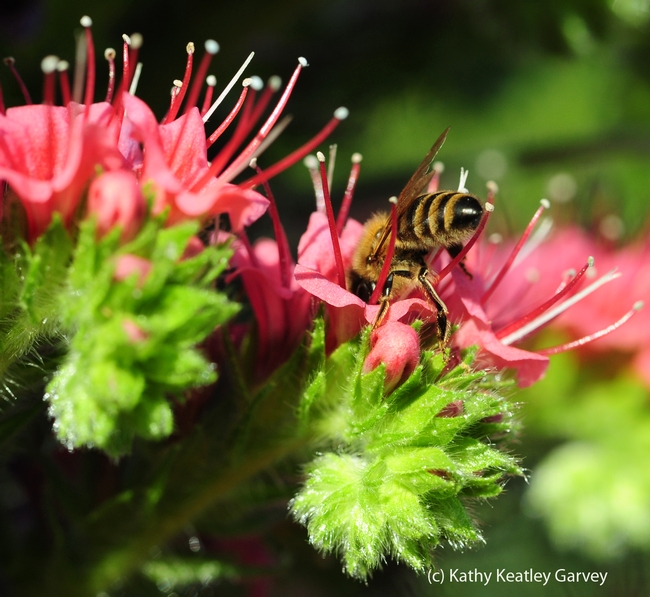 It's worth the wait.

The plant is a biennual and it blooms the second year and that's it. Plant specialists call this a monocarpic (dies after flowering).

There's no better place for the towers of jewels to "bee" than next to the six million or so bees at the Laidlaw facility.

The garden is open from dawn to dusk (no charge) year around. It's located on Bee Biology Road, west of the central campus.

If you go, bring your camera! Honey bee heads for the tower of jewels (Echium wildpretii). There are two bees in this photo. (Photo by Kathy Keatley Garvey)