Native bee enthusiast Celeste Ets-Hokin of the Bay Area is on a three-fold mission: She wants to protect North America's premier pollinators; she wants to inspire an appreciation for the importance and diversity of our native bees; and she wants people to create a habitat for native bees in their own gardens.

So, as an educational tool meant for all ages, Ets-Hokin originated the idea of a Wild Bee Gardens app to "show the dazzling diversity of North America's native bees." The app links native bees to many of the flowers they frequent.

The app is a comprehensive introduction to what the UC Berkeley zoology graduate calls "the essential world of native bees." It's comprised of some 300 photographs of native bees and their floral resources (primarily by entomologist/insect photographer Rollin Coville of the Bay Area) plus 100 pages "of extensive background and educational material in the form of guides."

Topics covered in the guides include: Robbin Thorp (Photo by Kathy Keatley Garvey)
Ets-Hokin wrote the text, obtaining answers to her questions from native pollinator specialist Robbin Thorp, emeritus professor of entomology at the University of California, Davis (co-author of the newly published Bumble Bees of North America: An Identification Guide) and UC Berkeley faculty members Gordon Frankie and Clare Kremen. They are acknowledged in the app for their contributions of scientific knowledge and research.

Ets-Hokin also praised the "amazing job" of the design and development team, Arlo and Rebecca Armstrong.

Where to get Wild Bee Gardens? The I-Pad version  is now available on the Apple App Store for the introductory price of $3.99. Those purchasing the app will receive the upcoming, expanded iPhone version at no additional cost, said Ets-Hokin, adding that they also will receive free downloads of all future enhancements. 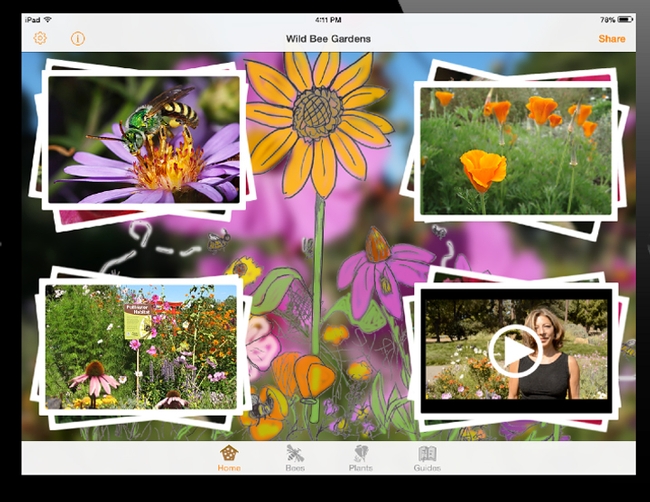 A screen shot of the "Wild Bee Gardens" app. 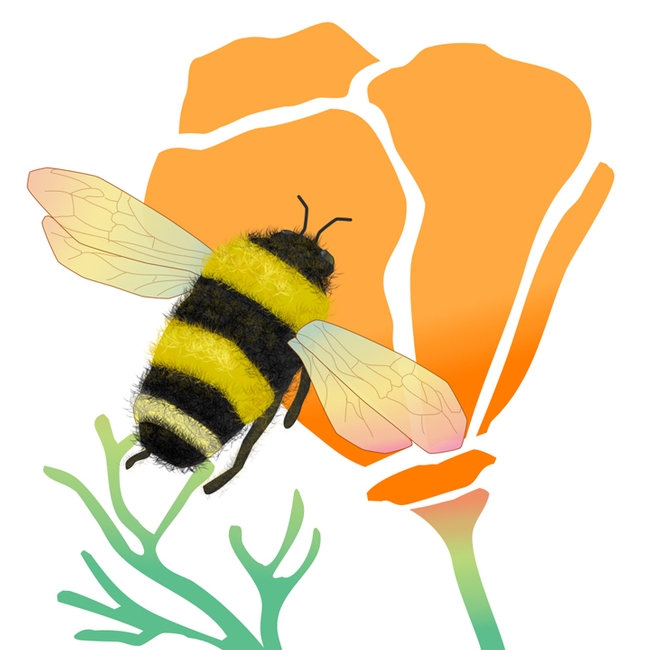 It's not your average garden variety calendar.

The perpetual calendar, the work of native bee enthusiast Celeste Ets-Hokin and entomologist/photographer Rollin Coville, both of the Bay Area, features native bees found throughout North America, including the leafcutter bee, bumble bee and sweat bee.

The macro photography is simply stunning. Through these photos, you can get up close and personal with bees you may never have even noticed. The ultra green sweat bees are especially spectacular.

A portion of the proceeds will benefit the Great Sunflower Project, a national pollinator monitoring and conservation program based in San Francisco, and the Portland, Ore-based Xerces Society for Invertebrate Conservation, which protects native bees and their habitat throughout the United States.

For instance, you'll learn that bumble bees are excellent crop pollinators; they pollinate such crops as tomatoes, cranberries and blueberries better than honey bees.

It's all there--all there on the calendar.

Coville, who received his doctorate in entomology from UC Berkeley in 1978, has been photographing insects and spiders for more than 25 years. He is collaborating with Thorp and Frankie on a number of projects, including a book on urban bees. It's due out next year.

Ets-Hokin, a UC Berkeley zoology graduate, devotes her time to the public awareness and conservation of native bees. For the past several years, she has collaborated with the Alameda County Master Gardeners in establishing a native bee demonstration garden at Lake Merritt, Oakland.

Coville takes many of his images there and now he has Ets-Hokin hooked on photography.

Preview the calendar here. Want to order one or more? Go to the printer's website. 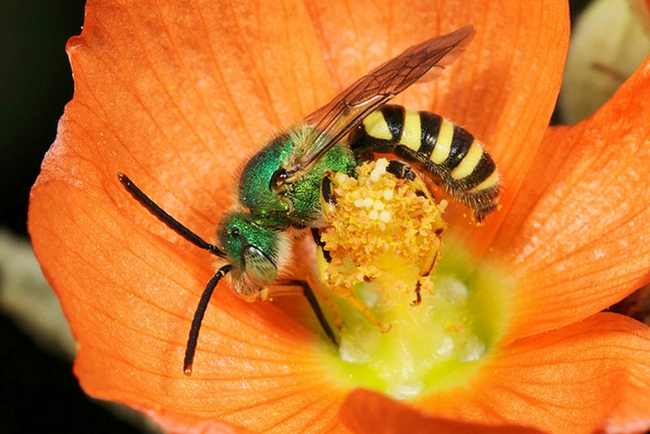 This is one of Rollin Coville's stunning photos of a male green sweat bee, Agapostemon. (Photo by Rollin Coville, used with permission), 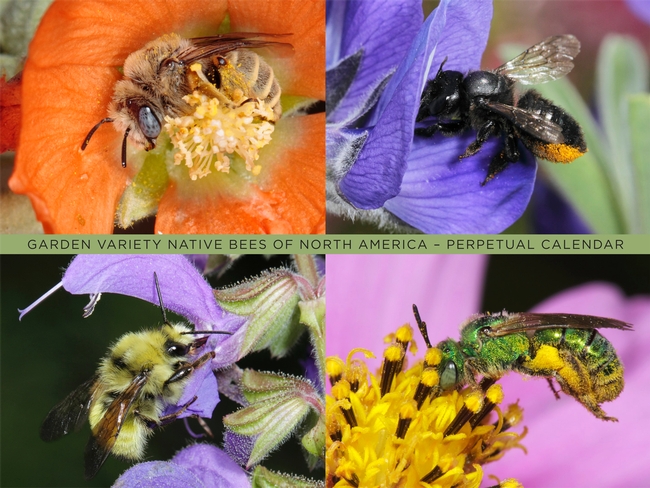 This is no ordinary calendar. No oceans. No mountains. No deserts.

Each month features a "pin-up girl."

But these models will never run for Miss America or promote world peace. Only a few have social skills and most are solitary.

They're all a part of the second annual "North American Bee Calendar." And...drum roll...the first ordering deadline is rapidly approaching: it's Friday, Oct. 15.

“It’s our second annual calendar, a project aimed at protecting pollinators, raising public awareness and generating funds to carry on the work of The Great Sunflower Project and the Xerces Society for Invertebrate Conservation,” said native bee enthusiast and calendar project coordinator Celeste Ets-Hokin of the San Francisco Bay Area.  “Most of these bees are commonly found and important pollinators.”

The calendar, measuring 9x12, features close-up photos by noted insect photographer Rollin Coville, who received his doctorate in entomology from UC Berkeley. He has been photographing insects--and spiders--for more than 25 years.

The calendar spotlights a different bee genus each month, with notes on preferred plants, nesting needs, and guidance on how to identify the genus, said author Ets-Hokin, who holds a degree in zoology from UC Berkeley.

Matthew Shepherd, senior conservation associate of the Xerces Society, and Ets-Hokin served as editors, and Miguel Barbosa as the graphic designer. Four scientists shared their research expertise: Neal Williams and Robbin Thorp of UC Davis; Gordon Frankie and Claire Kremen of UC Berkeley; and Rachael Winfree of Rutgers University, New Brunswick, N.J. In addition, contributing photos were Shepherd and Ets-Hokin, along with yours truly.

Purchasing a $15 calendar ($18 if you have an overseas address) is a good way to protect our badly needed pollinators and to raise public awareness.

Folks can place their orders by accessing the Xerces website or The Great Sunflower Project website. (Preview calendar)

Order by Oct. 15 and you'll get your calendar by late October, Ets-Hokin says. The last deadline to order is Nov. 30. For more information or discount rates for 25 calendars or more, contact Ets-Hokin at celeste.ets@comcast.net. 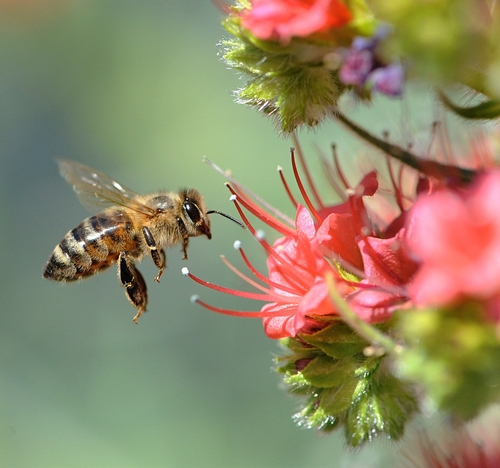 Miss January
NORTH AMERICAN BEE CALENDAR includes a honey bee for the month of January. This photo, of a bee heading toward a tower of jewels, was taken by Kathy Keatley Garvey of the UC Davis Department of Entomology. The other photos gracing the calendar are other bees, such as leafcutter and bumble bees, and are primarily the work of Bay Area insect photographer Rollin Coville.
Tags: Celeste Ets-Hokin (7), North American Bee Calendar (2), Rollin Coville (13)
Comments: 0
Calendaring the North American Bees

This is no ordinary calendar.

Created by UC Berkeley-alumnus Celeste Ets-Hokin, a native bee advocate from the San Francisco Bay Area, the calendar is a fundraising project for the Great Sunflower Project and the Xerces Society for Invertebrate Conservation.

The macro images, primarily the work of UC Berkeley-trained entomologist/insect photographer Rollin Coville, are stunning. Coville, who received his doctorate in entomology from UC Berkeley in 1978, has been photographing insects and spiders for more than 25 years.

The calendar is unique in that each month not only features a "pin-up" photo of a bee but also includes notes on preferred plants, nesting needs, and guidance on how to identify the genus. It's like zeroing in on the lifestyles of the not-so-rich and not-so-famous, the ones that share your garden with honey bees. You can preview a sample of the front cover, one month, and back cover of the calendar.

Back to the calendars. This year the theme is "Bees and Food."

A good theme, a good cause, and a good place to learn about the many species of bees, including leafcutter bees, sweat bees and bumble bees, and how to attract them.

I have it on my calendar. Only problem is, I don't want to part with my 2010 North American Bee Calendar. 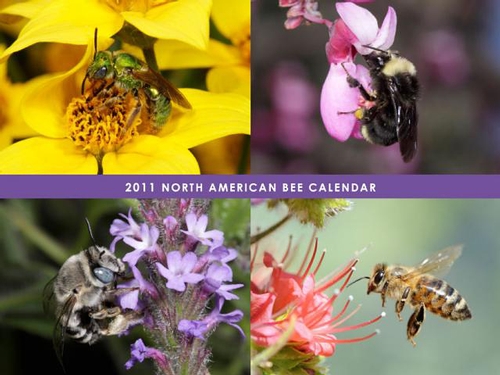 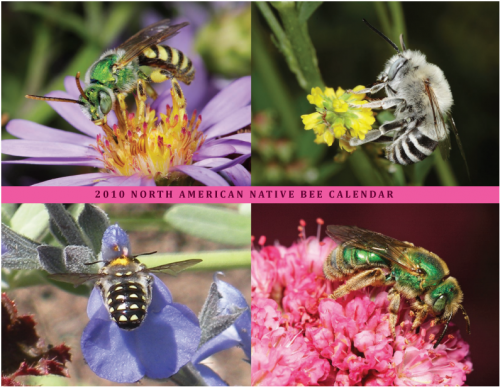