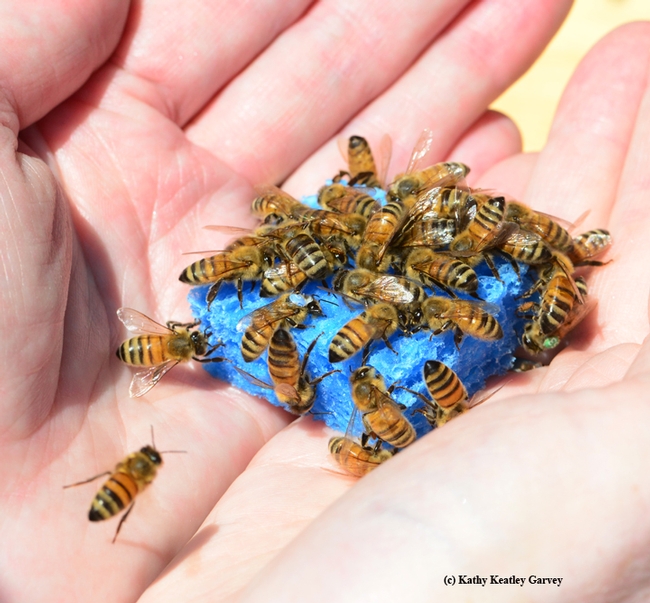 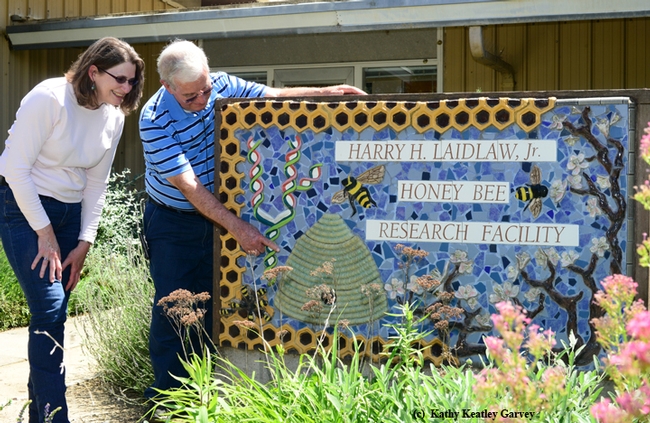 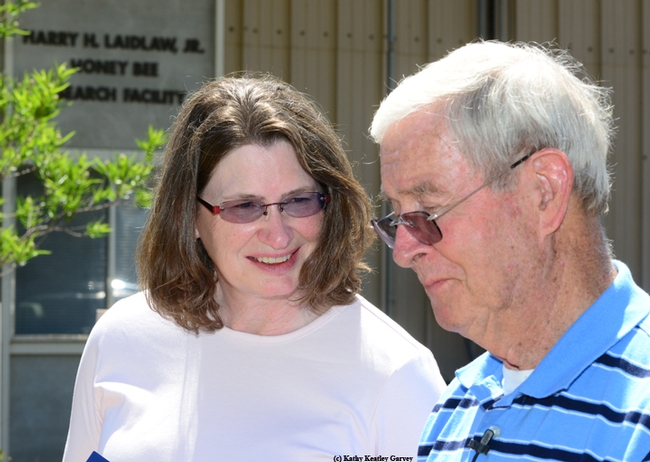 Did you count pollinators on Thursday, May 8?

That was "Be a Scientist Day," sponsored by the UC Agriculture and Natural Resources' Day of Science and Service to  commemorate 100 years of Cooperative Extension.

UC ANR asked that you take three minutes out of your day and count the honey bees, bumble bees and butterflies and other pollinators.

Amina Harris and Art Shapiro did.

In the Good Life Garden.

It's a little treasure located in the courtyard of the Robert Mondavi Institute for Wine and Food Science on the UC Davis campus.

And for pollinators, too.

Harris, director of the Honey and Pollination Center, and Shapiro, a butterfly expert and distinguished professor of evolution and ecology at UC Davis, happened to be enjoying the garden at the same time.

The count: 150 honey bees, two yellow-faced bumble bees (Bombus vosnesenskii) and one skipper butterfly. Most of them were foraging on the lavender or the catmint. 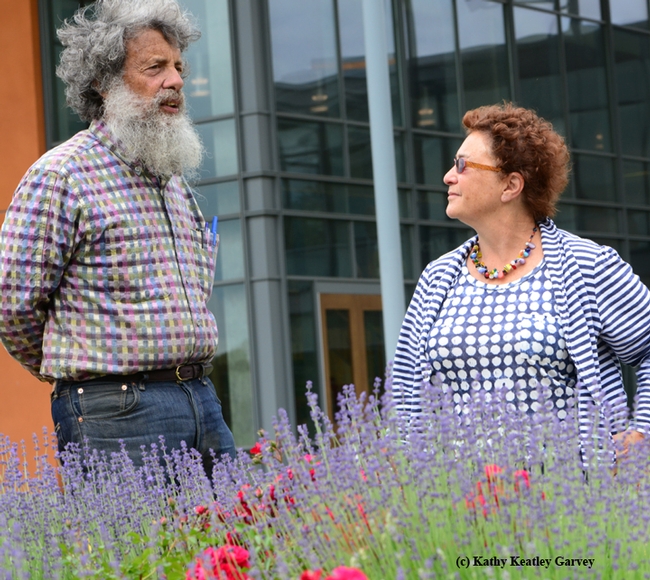 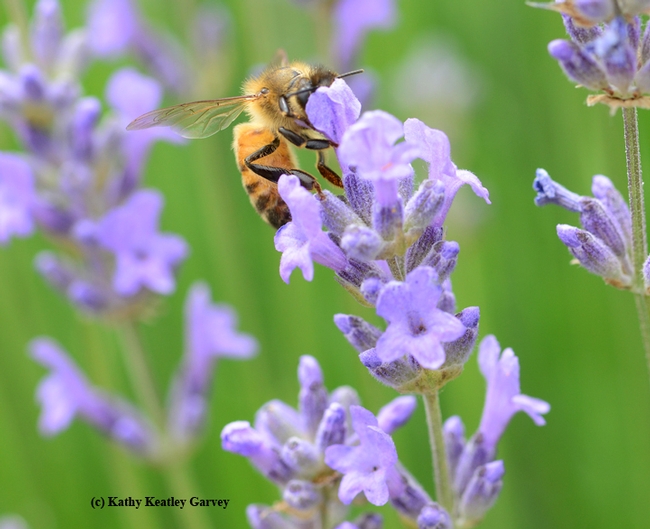 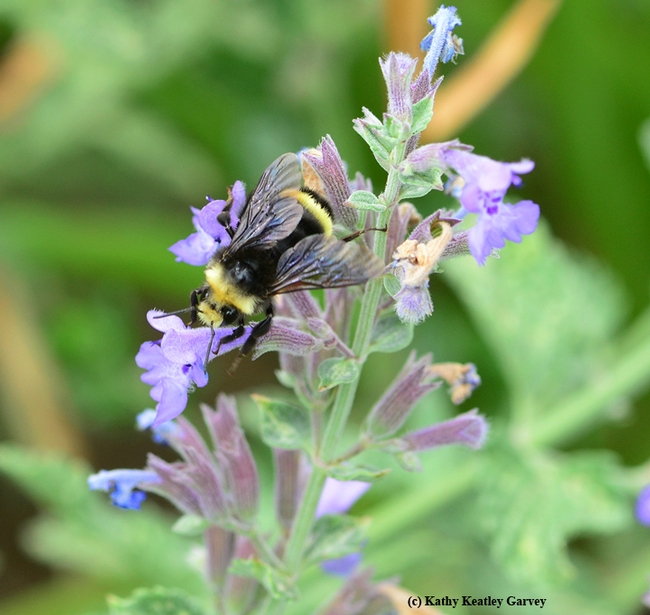 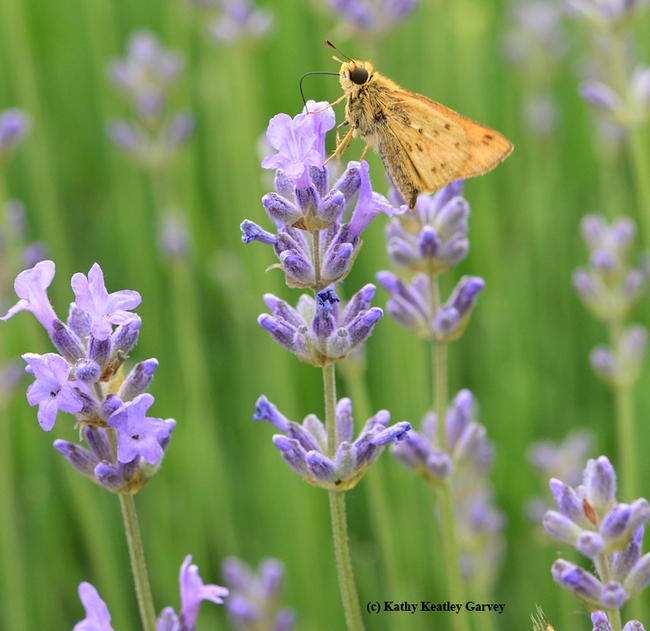 It's almost time to count the pollinators!

The University of California's Agriculture and Natural Resources (UC ANR) wants you set aside three minutes on Thursday, May 8 and count the pollinators wherever you live--and they live--in California. It's all part of UC ANR's Day of Science and Service celebrating the 100th year of the Cooperative Extension system.

First, count the pollinators (they can be bees, syrphid flies, bats, butterflies and the like.) Then you may choose to photograph them and upload your photos to the UC ANR website.

It should be interesting to glean the final count.

Just a few of the bees you may find:

Other activities on May 8 focus on water and food (see the website, Day of Science and Service)

Water: in this record drought, UC has committed to reducing its water consumption by 20 percent how are you conserving?

Food: Where is food grown in your community? Fill out our California food maps.

To celebrate the 100th anniversary of the founding of our nation's Cooperative Extension system, the University of California's Division of Agriculture and Natural Resources is sponsoring a day of science and service on May 8.

We need your help to make our science projects successful. The more people who participate, the more data we'll have to analyze.

Everyone in California is invited to participate. It's quick and easy. Go to beascientist.ucanr.edu, choose a project, and record your observations about conserving water, growing food or counting the numbers of pollinating bees, birds and butterflies in your neighborhood. You can share your observations on an interactive map and upload photos if you like.

This is a great opportunity to learn about California's natural resources and the role of agriculture in all our communities. 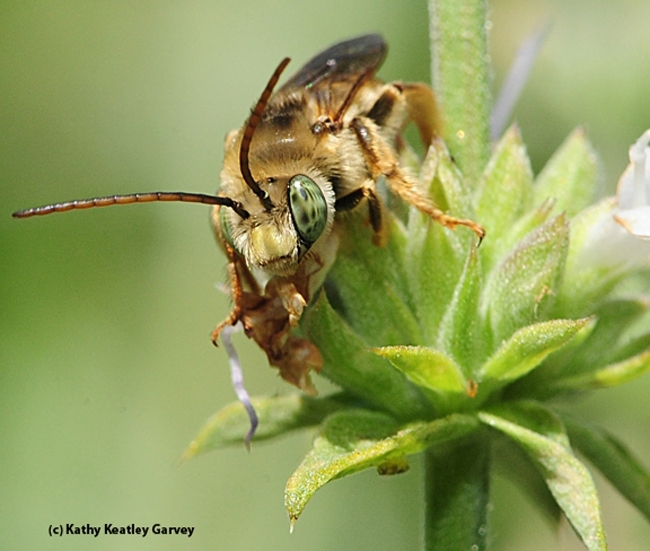 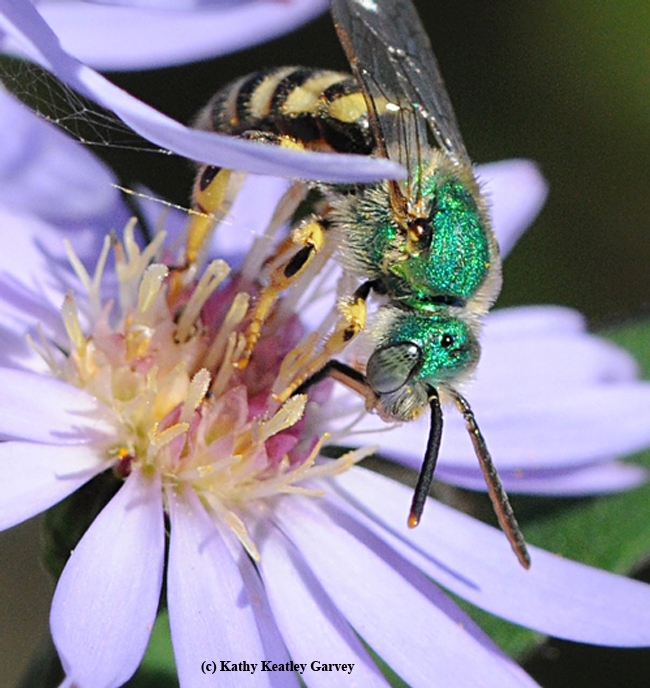 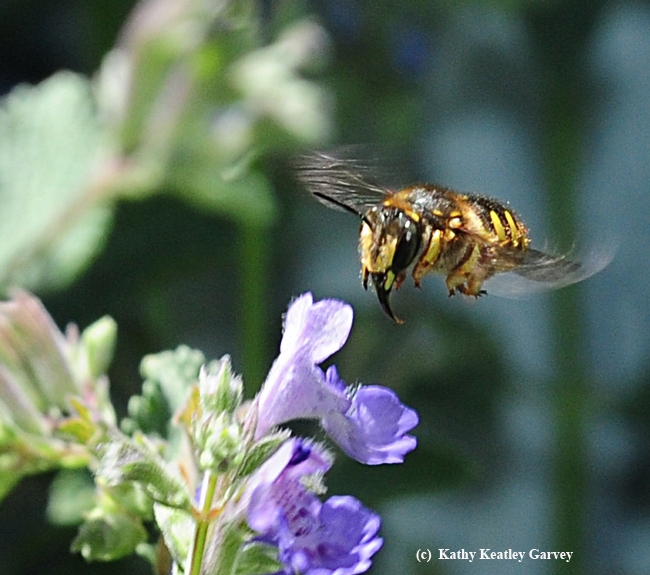 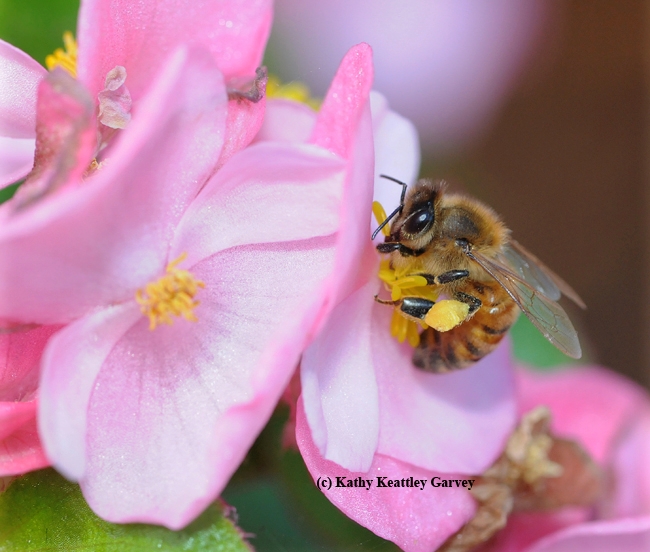 Do you now where the bees are?

On Thursday, May 8 let's all step outside for three minutes and count the honey bees and other pollinators.

It's all part of the "Day of Science and Service" sponsored by the University of California Agriculture and Natural Resources (UC ANR).

If you're lucky, you'll find multiple pollinators sharing a single flower. Maybe the foragers will all be honey bees, our prime pollinators!

We took this photo of four honey bees vying for the same spot on a pomegranate blossom. A hot spot.

It reminded us of humans fighting for a single parking space during the holiday season and then racing into a store and battling over a special gift (that will likely wind up at a garage sale in several months).

In this case, the reward was nectar. Sweet nectar. 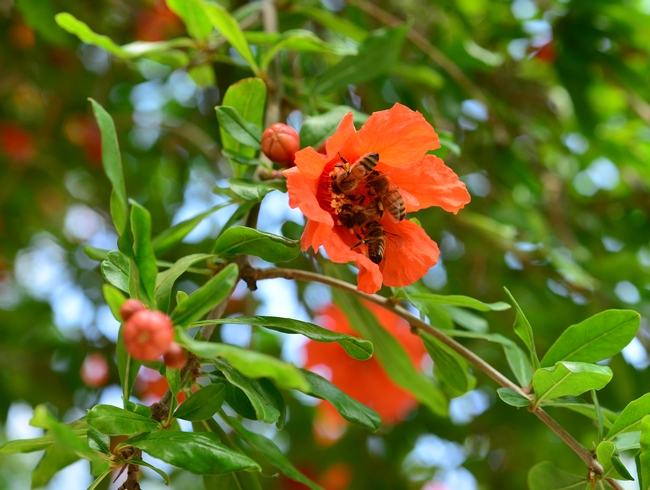 Barbara Allen-Diaz
What will it be? Wear bees or eat insects? Let’s do both!

UC ANR Vice-President Barbara Allen-Diaz promises to wear bees—honey bees—if she can raise $2500 by Thursday, Oct. 31 for the UC Promise for Education, a fundraising project to help needy UC students. See her promise page to donate.

Veteran professional bee wrangler Norm Gary, UC Davis emeritus professor of entomology, promises to come out of retirement (he retired from bee wrangling, academic service and beekeeping) to assist with the project.

If all goes well—that is, if Allen-Diaz can raise $2500 by Oct. 31--this bee stunt will take place next spring at the Harry H. Laidlaw Jr. Honey Bee Research Facility on Bee Biology Road, west of the central UC Davis campus.

However, if she raises $5000, she will eat insects or insect larvae. Entomophagy!

We asked senior museum scientist and world traveler Steve Heydon of the Bohart Museum of Entomology if he has any insect-eating recommendations.

What about termites? “Termites don’t have that much of a taste,” Heydon said. Norm Gary, who will be 80 years old next month, in his bees suit. (Photo by Kathy Keatley Garvey)
Beetle grubs, particularly the huge ones in New Guinea and Africa, are also considered good eats, Heydon said.

If Barbara Allen-Diaz needs a little practice, she can enjoy some insect-embedded lollipops available at the gift shop at the Bohart Museum, Room 1124 of the Academic Surge building on Crocker Lane.  The choices are crickets, ants and scorpions. Heydon says the lollipops are especially popular as Christmas stocking stuffers. Cost? $3 each.

Butterfly expert Art Shapiro, distinguished professor of evolution and ecology at UC Davis, has eaten butterflies, including Cabbage Whites (Pieris rapae). “I’ve eaten several to see if they’re edible to me, ‘though I’m not a bird. They are (edible), but I prefer fried grasshoppers. Yum!"

And what do Cabbage Whites taste like? “Toilet paper,” Shapiro said.

“My former student Jim Fordyce--he has a background in chemical ecology--used to say that he would never work on a bug he hadn't tasted,” Shapiro related. “However, he did work on the Pipevine Swallowtail, which sequesters the two aristolochic acids, which are mutagenic, carcinogenic and can apparently cause kidney atrophy. So I hope he never swallowed it. Fortunately, it tastes awful, or so I hear--I haven't tried it. Female European Large Whites (Pieris brassicae) are somewhat unpalatable and may be the basis of a loose mimicry ring. Larvae of the Large White are gregarious, inedible and smell like spoiled corned beef and cabbage."

According to Wikipedia, more than 1000 species of insects “are known to be eaten in 80 percent of the world’s nations.” Wikpedia lists some of the most popular insects as crickets, cicadas, grasshoppers, ants, various beetle grubs (such as mealworms), the larvae of the darkling beetle, various speces of caterpillars, scorpions and tarantulas.

Barbara Allen-Diaz hasn't indicated which insect or insect larvae she will select, but oh, the choices! 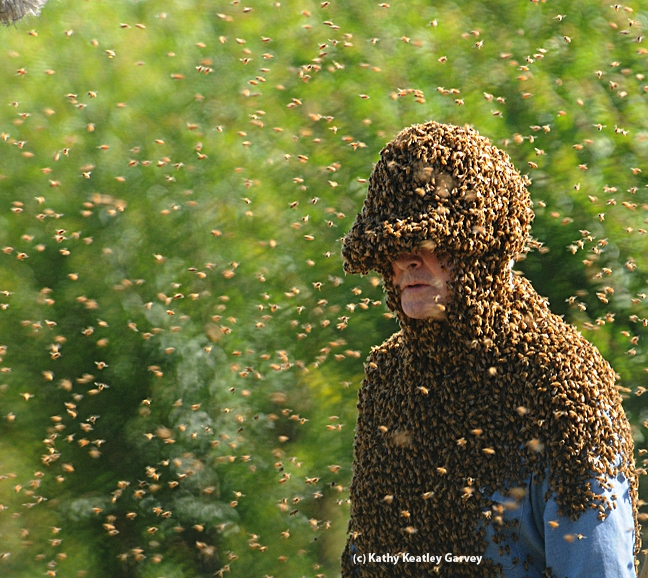 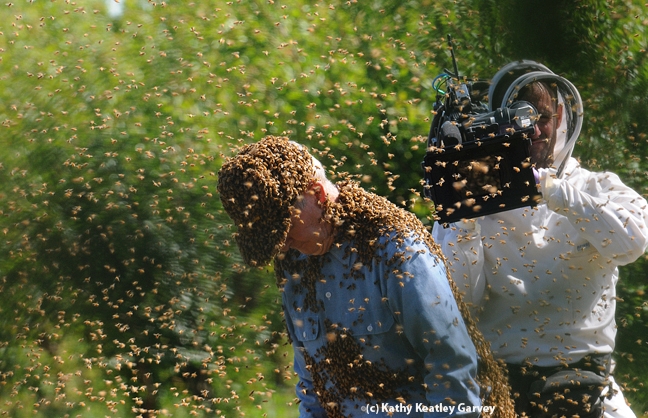