In the spring/summer months, she lives only four to six weeks and then she dies. Bee scientists say she basically works herself to death.

For the first half of her short life, she works inside the hive, tending to the brood, feeding the queen and drones, processing the food, building and repairing the nest, and completing other responsibilities, all in total darkness. In the second half of her life, she leaves the hive, emerging from the total darkness to the bright light. Weather permitting, she'll forage every day for food, propolis or water for the colony.

You've probably noticed these older foragers, with tattered wings, scarred bodies and hairless thoraxes, foraging among the flowers.  Those tattered wings could be the result of predators that missed: spiders, dragonflies, grasshoppers, dogs, birds and the like.

Worker bees do not fly well with flawed wings and they're even more susceptible to those crafty jumping spiders lurking in the flowers.

So it's interesting to read the recently published research by scientists at the Arizona State University and the Norwegian University of Life Sciences, research that shows that older honey bees experience reverse brain aging when they return to working inside the hive.

Writing in the journal, Experimental Gerontology, the researchers related that they tricked the older, foraging bees into returning to the hive to perform the social tasks of the younger bees.

In an ASU news release:  Gro Amdam, an associate professor in ASU’s School of Life Sciences, said:  “We knew from previous research that when bees stay in the nest and take care of larvae--the bee babies--they remain mentally competent for as long as we observe them. However, after a period of nursing, bees fly out gathering food and begin aging very quickly. After just two weeks, foraging bees have worn wings, hairless bodies, and more importantly, lose brain function--basically measured as the ability to learn new things. We wanted to find out if there was plasticity in this aging pattern so we asked the question, What would happen if we asked the foraging bees to take care of larval babies again?"

Well, they found that the older bees that returned to the hive seemed to recover their ability to learn, and that the protein in the bee brains changed for the better.

"When comparing the brains of the bees that improved relative to those that did not, two proteins noticeably changed," the news release said. "They found Prx6, a protein also found in humans that can help protect against dementia--including diseases such as Alzheimer’s--and they discovered a second and documented 'chaperone' protein that protects other proteins from being damaged when brain or other tissues are exposed to cell-level stress."

In some respects, you could almost say that stay-at-home moms are better off than the work-outside-the-home moms, but (1) worker bees are not moms, and (2) both are working.  The queen lays the eggs, as many as 2000 eggs a day during peak season. The worker bees are females, but their ovaries are tiny and normally non-functional, says Norm Gary, emeritus professor of entomology at UC  Davis in his book, Honey Bee Hobbyist: The Care and Keeping of Bees.

Still, we can imagine that this fascinating bee science research could lead to another tool to investigate dementia in elderly humans. 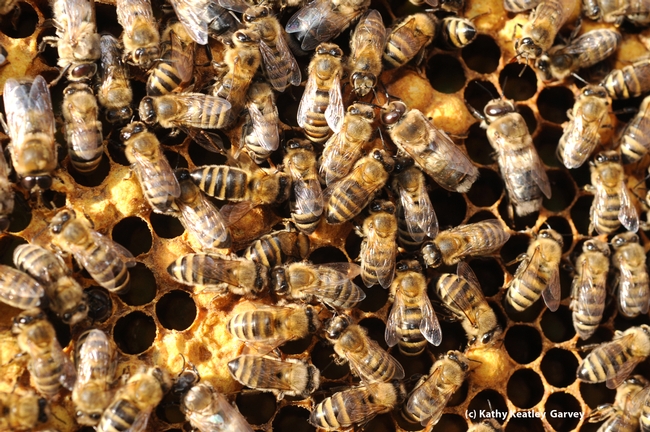 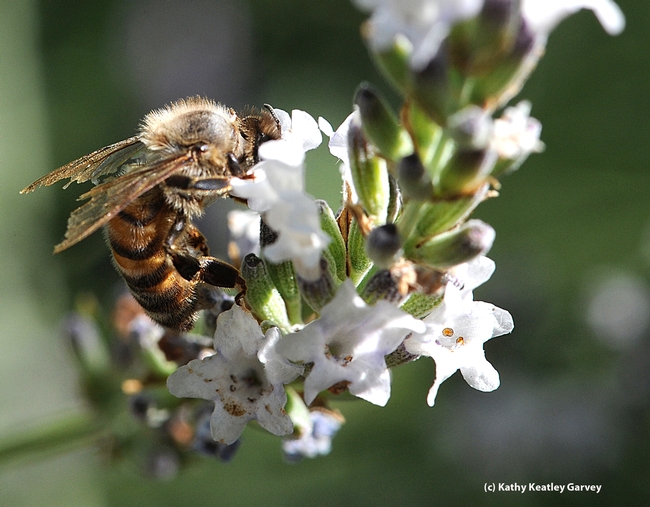 "Where do bees get red pollen?" we were asked. "We've seen bees packing blood-red pollen at the entrance to a hive."

Well, one flower that yields red pollen is rock purslane (Calandrinia grandiflora). It's a drought-tolerant perennial, a succulent.

Interestingly enough, the blossom itself is neon pink or magenta, the kind that cyclists wear to be seen.

Rock purslane attracts its share of honey bees, bumble bees, carpenter bees, leafcutter bees and sweat bees. Other pollinators, including flies, land on it, too. It's a good plant to brighten your garden and to observe the wide variety of floral visitors.

Bees collect pollen as a protein source to rear their brood.

"The importance of pollen to the health and vigor of the honey bee colony cannot be overstated," writes Norman Gary, emeritus professor of entomology, in his book, Honey Bee Hobbyist, The Care and Keeping of Bees. "Honey satisfies the bees' carbohydrate requirement, while all of the other nutrients--minerals, proteins, vitamins and fatty substances--are derived from pollen."

"Nurse bees consume large amounts of pollen, converting it into nutritious secretions that are fed to developing larvae," Gary points out. "During an entire year, a typical bee colony gathers an consumes about 77 pounds of pollen."

And some of it is red! 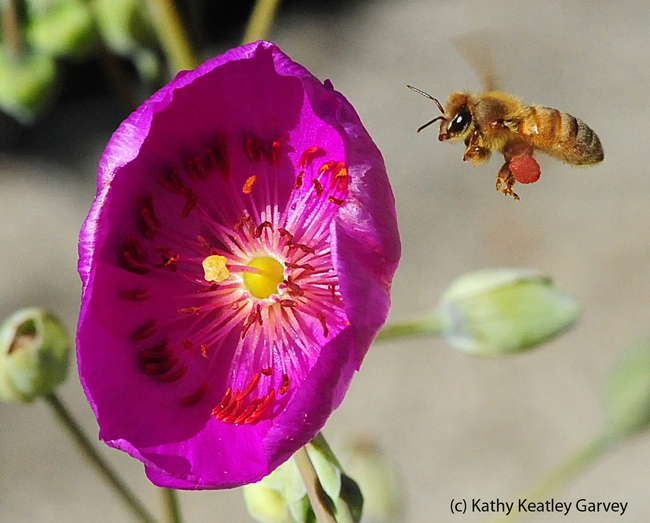 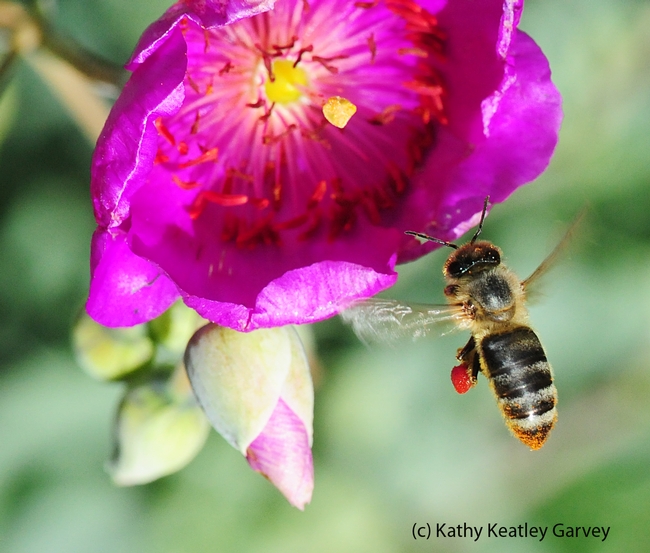 You've heard of "Got milk?"

With honey bees, it's "Got pollen?"

We spotted a lone honey bee on an African daisy last weekend. It was clear she'd been foraging for pollen. Pollen covered her legs and antennae and rimmed her head. And it was clear where it came from. The pollen on the daisy and the pollen on her matched perfectly.

"The importance of pollen for the health and vigor of the honey bee colony cannot be overstated," writes Norman Gary, emeritus professor of entomology at UC Davis, in his newly published book, Honey Bee Hobbyist: The Care and Keeping of Bees. "Bees need a balanced diet. Honey satisfies the bees' carbohydrate requirements, while all of the other nutrients--minerals, proteins, vitamins and fatty acids--are derived from pollen."

"Nurse bees consume large amounts of pollen, converting it into nutritious secretions that are fed to developing larvae," Gary writes. "During an entire year, a typical bee colony gathers and consumes about 77 pounds of pollen."

Gary further points out: "When she contacts the flower, pollen grains are attracted to her body, similar to the attraction of iron fillings to a magnet."

So, when you see a honey bee covered with pollen grains and think--"What a load!"-- that's just part of the 77 pounds gathered and consumed in a colony per year. 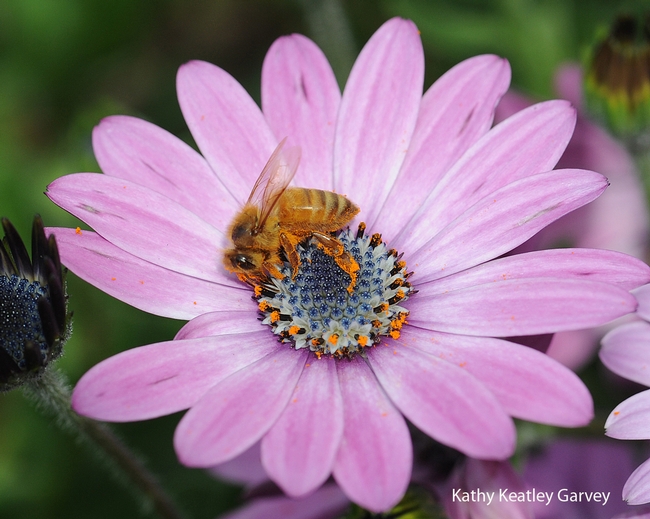 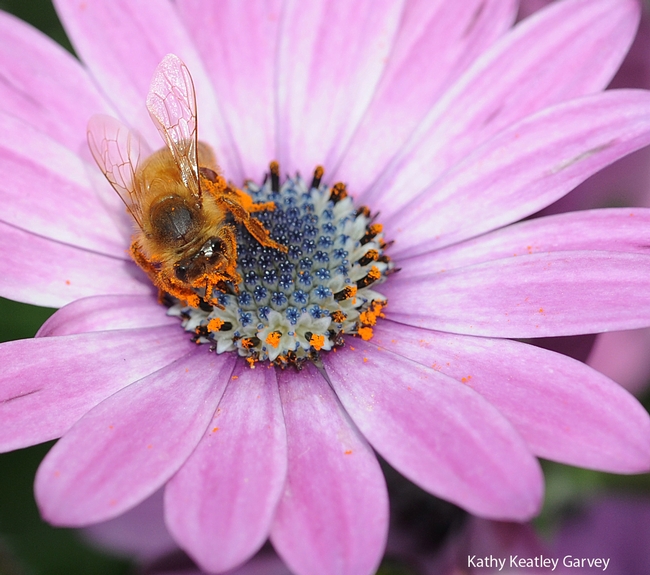 Today at the Harry H. Laidlaw Jr. Honey Bee Research Facility at the University of California, Davis, we borrowed a plastic spoon and offered a taste of honey to newly emerged honey bees.

It was their sisters' making and now it was theirs. And soon, they will be making their own.

Norman Gary, emeritus professor of entomology at UC Davis and author of the newly published book, Honey Bee Hobbyist, the Care and Keeping of Bees, writes that "When all conditions are ideal (good weather, long days, intense nectar secretion and very populous colonies), bees can collect enormous quantities of nectar--perhaps around 6 pounds or more in one day--yielding around 2 to 3 pounds of honey per day."

Still, we often hear folks complain about humans stealing honey from the hives.

"Bees consume most of the honey they make," writes Gary, who has kept bees for more than six decades and continues his work as a professional bee wrangler. "Honey is primarily food for them and secondarily a treat for us because they produce more than the require for sustenance, which is 200 pounds per colony annually. The extra honey--anything over 200 pounds--is known as 'surplus' honey because it can be harvested without jeopardizing colony survival."

However, hobby beekeepers usually expect to produce around 100 pounds of honey per hive, he says.

That's definitely more than just a taste of honey! 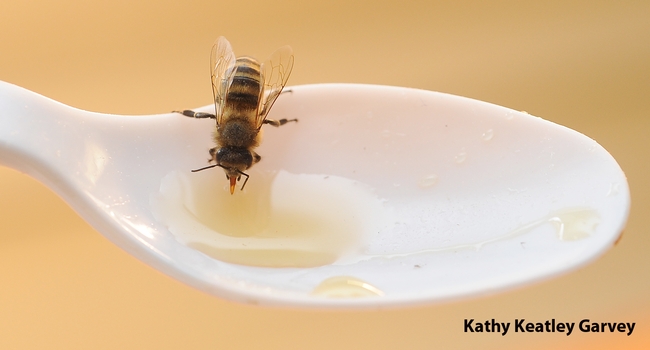 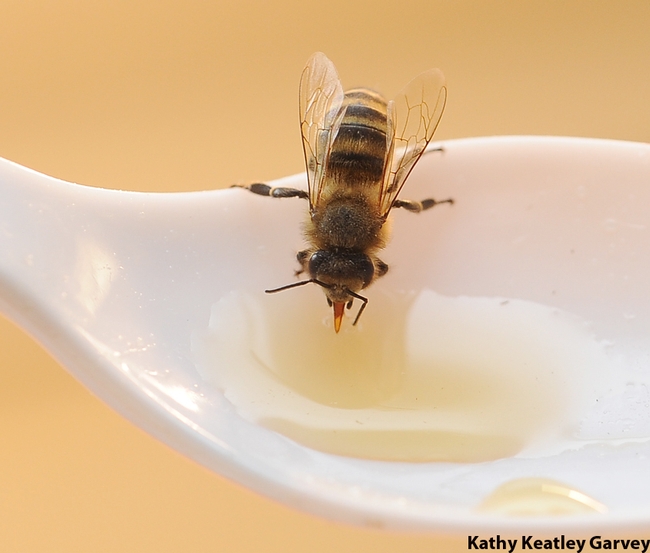 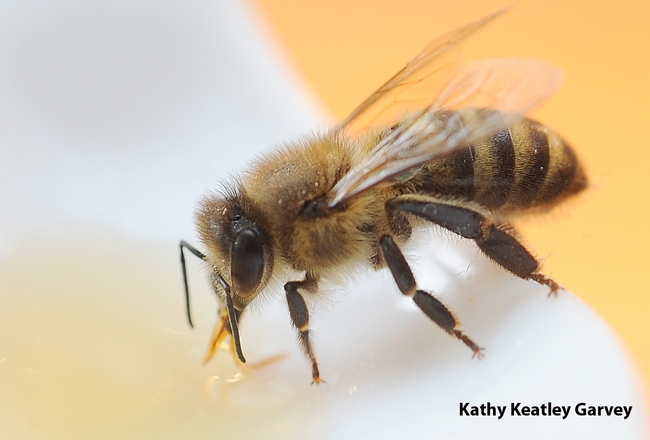 Actually, bee swarms aren't that rare on the UC Davis campus. They're just difficult to see because we're usually looking down instead of up.

This week UC Davis employee Suzan Carson alerted us to a bee swarm in the North Hall/Dutton Hall complex. She pointed to a tree branch, about 30 feet off the ground, where, in the deepening shadows, a cluster hung like grapes.  "Good eye!" we said.

Today, toting my telephoto lens, I returned to capture an image of the cluster. They were still there, but probably won't be for long. The pending rainstorm may drive them from their temporary home, observed Extension apiculturist Eric Mussen of the UC Davis Department of Entomology.

Norman Gary, emeritus professor of entomology at UC Davis, explains the ins and outs of swarms in his newly published book, Honey Bee Hobbyist: The Care and Keeping of Bees.

"The act of swarming is perhaps the most dramatic event in the lives of honey bees," Gary  writes. "Here's how it happens: Egg production increases dramatically in response to  warming spring weather as well as an abundance of pollen and nectar from spring flowers. Within a few weeks, the colony population essentially doubles. Multiple queen cells--usually at least six--are constructed in the brood nest. A few days prior to the emergence of a virgin queen, the old queen's ovaries begin to shrink. Egg-laying essentially stops, and she loses enough weight to permit flight for the first time since her mating flight."

So basically there's "no room in the inn" for the burgeoning population. The colony divides. The swarm usually heads for a nearby tree to cluster on a branch while the scouts search for a new--and appropriate--home.

Meanwhile, back at the old hive, new queens are emerging and what happens next isn't pretty. "Rival queens engage in fierce stinging attacks until only one virgin queen remains," Gary writes.

About a week later, the victorious queen will depart on her mating flight to a drone congregation area, mate with 12 to 25 or so drones, and then return to the hive to lay eggs--as many as 2000 a day during the peak season.

The queen will never leave the hive again...

Unless, on a warm spring day... 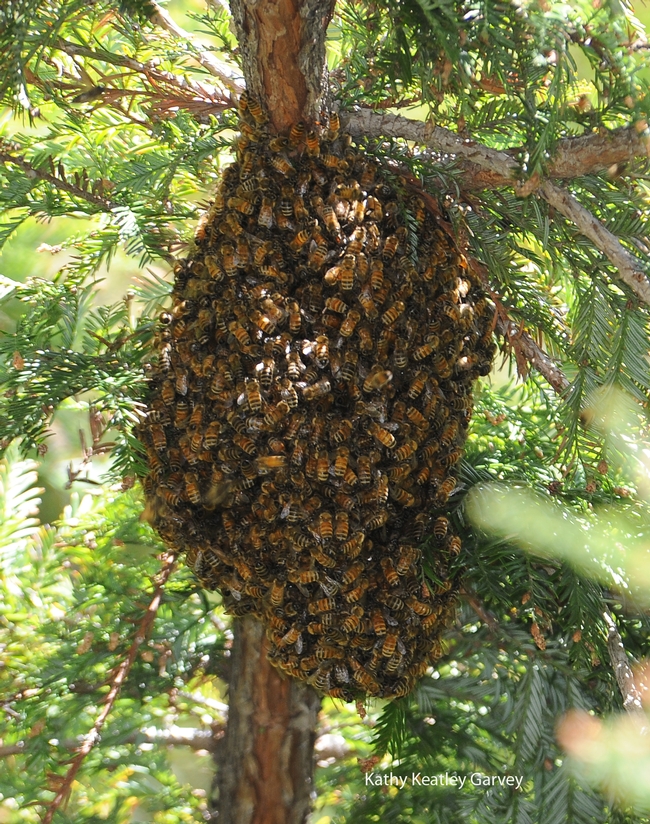