So, every chance I get, I shoot an image for him.

Many of the images wind up in his classroom PowerPoint presentations.

And some are even pretty--especially when they're touching down on delicate pink blossoms. 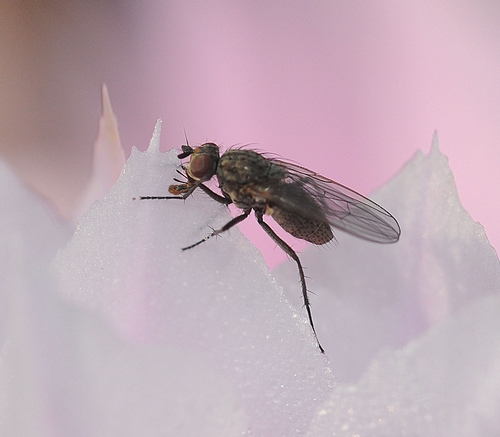 Pretty in Pink?
A FLY on a cactus flower: an almost ethereal image. (Photo by Kathy Keatley Garvey) 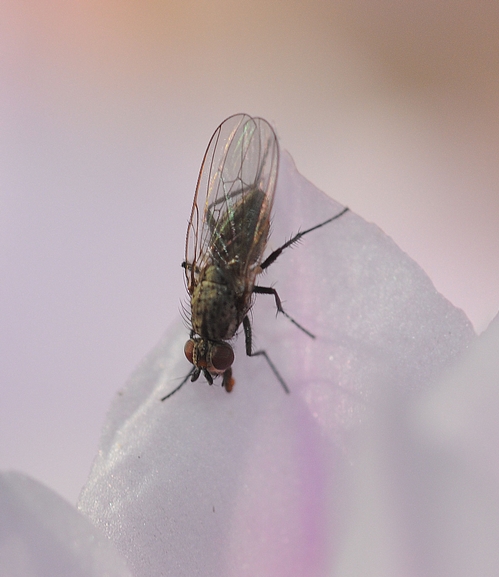 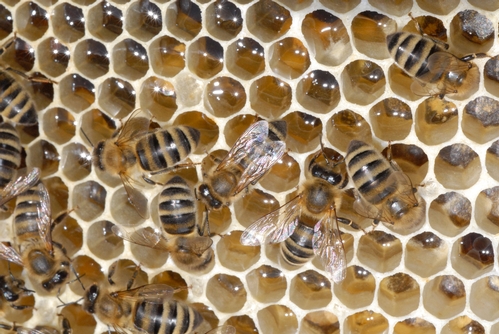 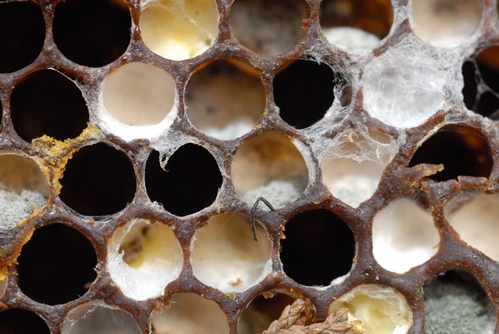 Abandoned Hive
A SINGLE ANTENNA pokes through a cell from an abandoned hive. Colony collapse disorder is characterized by the mysterious phenomenon of bees leaving the hive, never to return. They leave behind the queen and immature brood (eggs, larvae and pupae) and stored food. (Photo by Kathy Keatley Garvey)
Tags: calamity (1), colony collapse disorder (14), Haagen-Dazs (7), healthy hive (1), UC Davis (188)
Comments: 1
To Catch a Carpenter Bee

To catch a carpenter bee...

How fast? As fast as a buzz. They buzz into a blur and then back into a buzz.

Oh, but there are ways to capture their images. Consider not just the camera,  but the time of day, the habitat, and your presence.

Camera: A macro lens will enable you to get up close. Remove the lens hood so you can get even closer.  Like people, carpenter bees don't like being poked with sharp metal objects. Skip the tripod. It's too cumbersome to haul around on insect safaris. Use a flash to stop the action and provide a sharper depth of field.

Time of Day:  Shoot early in the morning when the sun hasn't quite warmed them. They don't fly as fast then. They are cold-blooded so their body reflects the temperature around them.

Habitat: Know what they like. In our yard, they gravitate toward the lavender, but they like to mix it up with sage, catmint and coral bells. The pomegranate, citrus, tomato and squash blossoms don't interest them as much as they do me.

Your Presence: There are several rules here. Watch where they go and station yourself there. Make them come to you. Assure them them that hey, you're just part of the scenery. (You don't have to wear a t-shirt that says "I'm Just Part of the Scenery.") Keep low, preferably at their level. Do not shadow them. If they buzz off, not to worry. Like Arnold, they'll be "b-a-a-c-k."

Added Attractant:  Sometimes you can dab a little honey or sugar water on a blossom to ensure that they stay a little longer.  I'm saving this one for autumn, when the nectar subsides.

Oh, one more thing. If you have a entomologically inclined cat, make sure the feline is not around to disrupt their flight patterns.

But that would make an interesting photo, too. 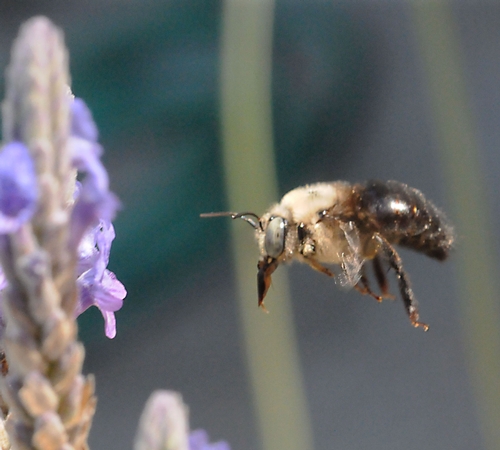 Caught in Flight
CAUGHT IN FLIGHT, a male carpenter bee heads for the lavender. (Photo by Kathy Keatley Garvey) 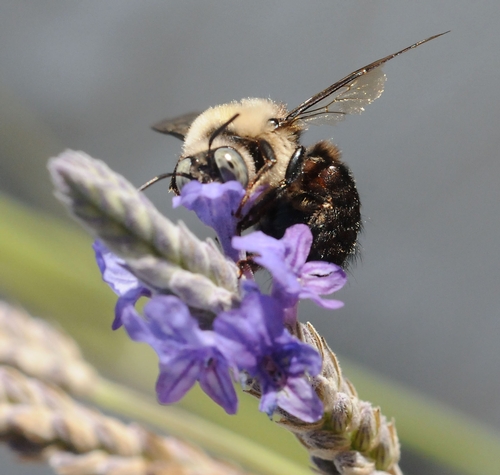 If you like squash, you have a bee to thank.

Honey bees in California pollinate some 100 agricultural crops, including fruits, nuts and vegetables. One of them is squash.

When a squash blossom burst open last weekend in our garden, a honey bee buzzed inside, shadowed by a carpenter bee.

The carpenter bee chased off the honey bee, but not for long. The honey bee returned to roll in the pollen, victorious.

A victory in the garden. Does that make it a victory garden? 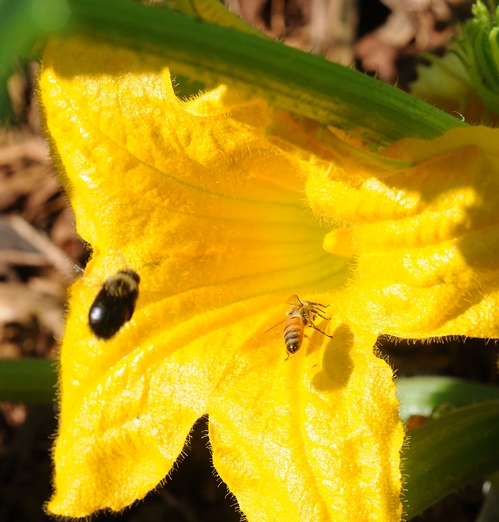 Carpenter Bee and Honey Bee
A CARPENTER BEE and a honey bee head for the same squash blossom. (Photo by Kathy Keatley Garvey) 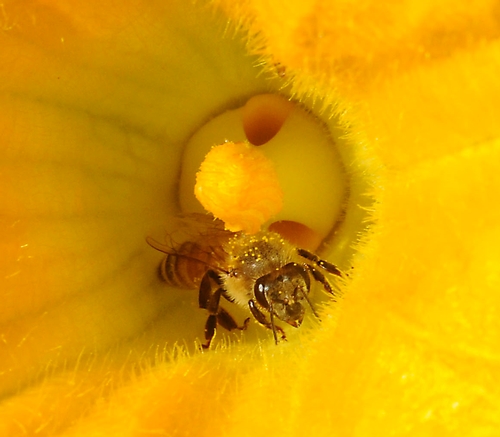 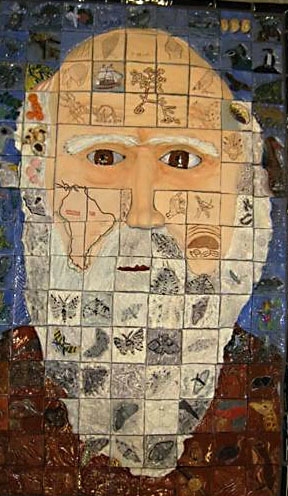 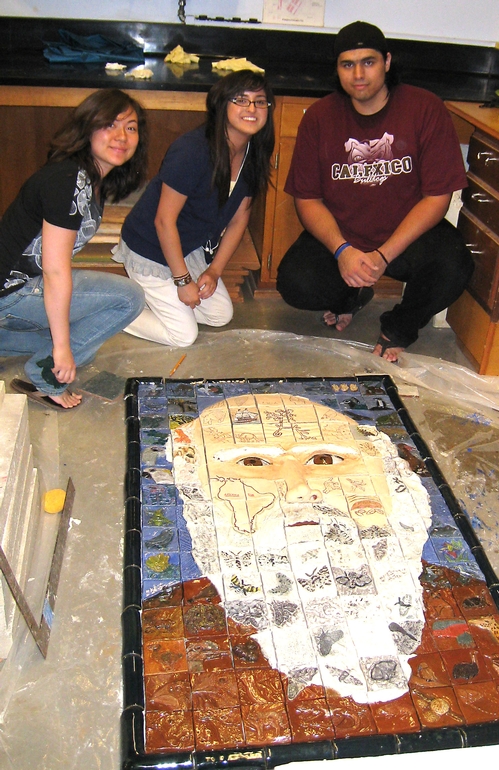