Bug Squad
sitenum=63
Happenings in the insect world
Honey, You Ought to Attend This!

If you've ever wanted to taste exotic honeys (of course, you have!) and if you've ever wondered why native bees don't make honey (you have, haven't you?), then you're in luck.

The Honey and Pollination Center at the University of California, Davis, is hosting an international honey tasting event on Tuesday, April 5 in the Robert Mondavi Institute for Wine and Food Science (RMI) Sensory Theater, and you're invited.

The event, billed as The World of Honey--International Honey Tasting, will take place from 6:30 to 8 p.m. at RMI, located on Old Davis Road, UC Davis campus.

Amina Harris, director of the Honey and Pollination Center, will lead the tasting.  The event opens with a short talk and PowerPoint on stingless bees and native bees by Robbin Thorp, distinguished emeritus professor, UC Davis Department of Entomology and Nematology.

In his talk,Thorp will discuss the diversity of bees (20,000 species in the world) and why most bees do not produce honey. He also will cover "which ones produce honey that we do harvest, primarily bees of the genus Apis and some of the many stingless bees."

Student tickets are $12.50, while tickets for UC Davis affiliates are $25, and $30 for the general public.  To registrar, access the Honey and Pollination Center website at https://registration.ucdavis.edu/Item/Details/190 or contact Elizabeth Luu at luu@caes.ucdavis.edu or Amina Harris at aharris@ucdavis.edu. The last day to register online is Sunday, April 3. 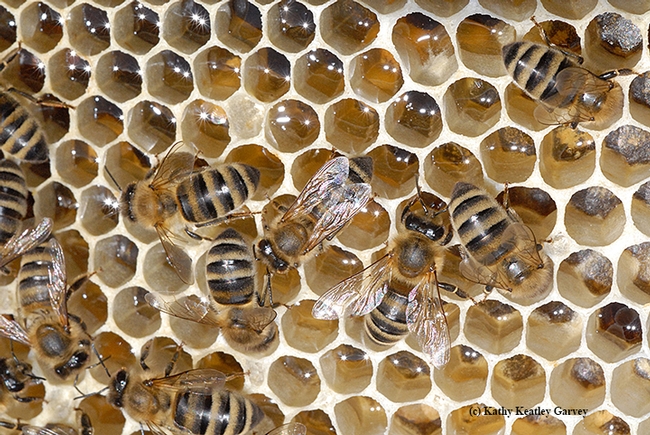 Why do honey bees (Apis mellifera) make honey and not most other bees? That question will be answered at the Honey and Pollination Center's "World of Honey" tasting event on April 5. (Photo by Kathy Keatley Garvey) 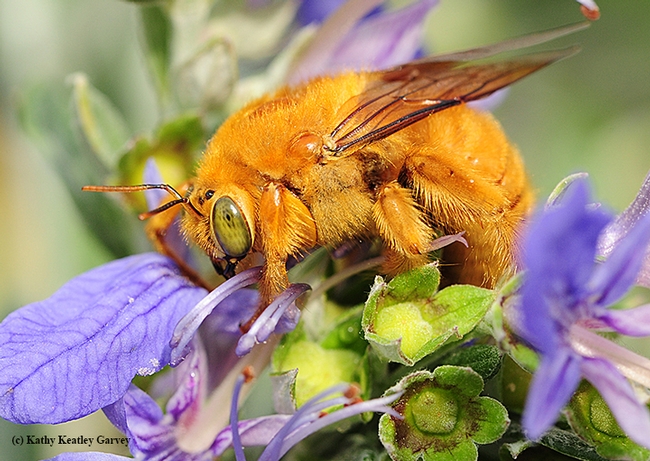 Gene E. Robinson of the University of Illinois at Urbana-Champaign will speak on “Me to We: Using Honey Bees to Find the Genetic Roots of Social Life” at the UC Davis Chancellor's Colloquium on Monday, Feb. 22 in Jackson Hall, Mondavi Center for the Performing Arts.
Everything's coming up bees!

A number of eminent bee scientists will be speaking soon at UC Davis. They include David Tarby, Gene Robinson and Dennis vanEngelsdorp.

"Social insects have long fascinated entomologists, and honey bees have been a model system for their study," said Tarpy, who received his doctorate in entomology at UC Davis in 2000 with major professor Robert Page, former chair of the Department of Entomology and now university provost emeritus and Foundation chair of Life Sciences, Arizona State University. "At the heart of the colony is a single queen, the mother of all nestmates and critical member for colony productivity. The natural history of queens is a fascinating story, one that interweaves the complexities of social behavior, genetics, and evolutionary ecology." Dennis vanEngelsdorp of the University of Maryland will speak at the second annual UC Davis Bee Symposium, set Saturday, May 7.
Tarpy focuses his research on the biology and behavior of honey bee queens—using techniques including field manipulations, behavioral observation, instrumental insemination, and molecular genetics—in order to better improve the overall health of queens and their colonies.

Gene Robinson, Monday, Feb. 22
Eminent honey bee scientist Gene E. Robinson of the University of Illinois at Urbana-Champaign will speak on “Me to We: Using Honey Bees to Find the Genetic Roots of Social Life” at the UC Davis Chancellor's Colloquium on Monday, Feb. 22 in Jackson Hall, Mondavi Center for the Performing Arts. This was initially scheduled to take place in the Vanderhoef Studio Theatre, but has been changed due to the increasing registration.

Dennis vanEngelsdorp, Saturday, May 7
The second annual UC Davis Bee Symposium is scheduled Saturday, May 7, with details forthcoming. We do know, however, that bee scientist  Dennis vanEngelsdorp of the University of Maryland will be among the featured  speakers, according to Amina Harris, director of the UC Davis Honey and Pollination Center,  and Extension apiculturist Elina Niño, of the UC Davis Department of Entomology and Nematology. So mark your calendars for this all-day symposium.

Van Engelsdorp says on his website: "My research focus on pollinator health, and honey bee health specifically.  I am particularly intrigued with using an epidemiological approach to understanding and (importantly) improving honey bee health. This approach is multi-faceted, requiring understanding both the etiology of individual bee diseases and the large scale monitoring of colony health."

Van Engelsdor presented an outstanding TED talk on "A Plea for Bees" back in July of 2008 and you can watch it here. The teaser: "Bees are dying in droves. Why? Leading apiarist Dennis vanEngelsdorp looks at the gentle, misunderstood creature's important place in nature and the mystery behind its alarming disappearance."

If you missed the 2015 UC Davis Bee Symposium, you missed hearing Marla Spivak, the distinguished McKnight Professor in the Department of Entomology at the University of Minnesota and winner of a MacArthur Genius Grant, deliver the keynote address. She delivered a TED talk in June of 2003 on our disappearing bees and you can watch it here.

Meanwhile, check out the Honey and Pollination Center website to see photos and data from the inaugural UC Davis Bee Symposium.  UC Davis is the place to "bee" to learn about bees. 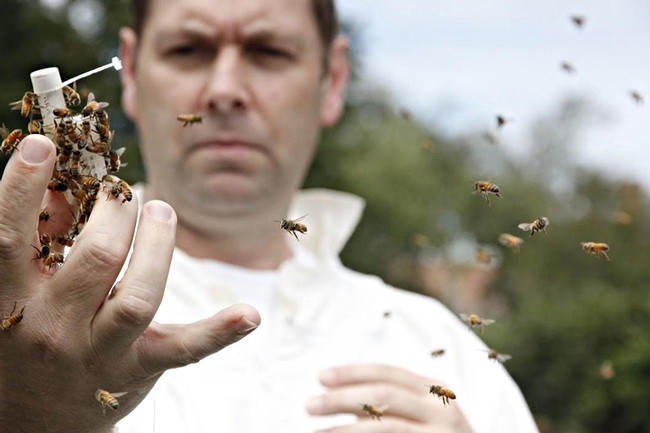 A honey bee foraging on oxalis, a sure sign of spring. (Photo by Kathy Keatley Garvey)
It's getting to look a lot like...February.

When you see honey bees foraging on the early blooming oxalis, that's a sure sign that February is approaching.

And that means it's time for some mead, music and a bee-influenced dinner.

The UC Davis Honey and Pollination Center is hosting its third annual fundraiser, The Feast: A Celebration of Mead and Honey, from 6 to 9 p.m., Saturday, Feb. 6 in the Robert Mondavi Institute of Wine and Food Science. Reservations are now underway. (See registration page.)

What's mead? "It's a fermented blend of honey, water and often fruits, yeast, or spices that dates back to about 7000 BCE," Harris says.  Ceramic shards found in Jiahu, Henan Province, China held a mead-like residue, according to Patrick McGovern, the leading authority on ancient alcoholic beverages. According to the BBC the number of meaderies in the United States has increased from 30 to 40 to more than 250 in the last 10 years.

The event, to take place in the Mondavi Institute's Sensory Building on Old Davis Road, will begin at 6 with cocktails, live music, hors d'oeuvres and the featured ginger mead from Schramms Mead in Michigan. Select wines, honey lemonade and sparkling mead also will be served.

Harris says the menu will include a triple avocado salad, followed by "a tagine of chicken, vegetables and couscous served family-style. A light cheese course will accompany a dessert mead flight with a wonderful citrus almond torte closing the festive evening."

Proceeds from the dinner will be used to support the outreach and education programs of the Honey and Pollination Center. Its mission is “to make UC Davis a leading authority on bee health, pollination and honey quality," Harris says.

Tickets for the dinner are $125 and are available online at http://honey.ucdavis.edu/. For more information contact Amina Harris at aharris@ucdavis.edu. 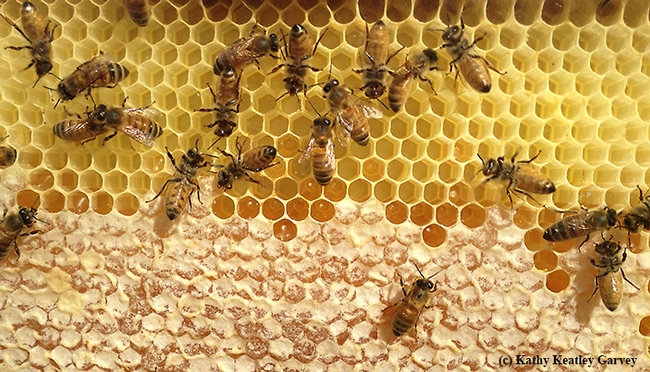 Honey Favor Wheel
Would you like to know more about honey?

The UC Davis Honey and Pollination Center is hosting an educational honey tasting on Wednesday night, Jan. 27 in the Sensory Theater of the Robert Mondavi Institute for Wine and Food Science on Old Davis Road. If you'd like to enroll, you need to register today (Monday, Jan. 20), To register, access this site.

The event, conducted by Amina Harris, director of the Honey and Pollination Center, will take place from 6:30 to 8:30 p.m.  and will feature California honeys. Extension apiculturist Elina Niño of the UC Davis Department of Entomology and Nematology will talk about bees, honey and beekeeping. Amina Harris, director of the Honey and Pollination Center
The center published a Honey Flavor Wheel in the fall of 2014 that offers tasters a way to describe honey. It is available for purchase at the center. Elina Niño, Extension apiculturist
The front of the wheel shows the descriptors, including fruity, floral, herbaceous, woody, spicy, nutty, confectionary, caramel and earthy.  The back relates how to taste honey and shares four honey profiles (Florida tupelo, California orange blossom, Northwest blackberry and Midwestern clover) “ so the consumer can get an idea of how to use this innovative product,” Harris said.

The Honey Flavor Wheel production involved six months of research and development. “We brought together a group of 20 people--trained tasters, beekeepers and food enthusiasts--who worked together with a sensory scientist to come up with almost 100 descriptors,” Harris recently said. “This wheel will prove invaluable to those who love honey and want to celebrate its nuances.”

"Honey is honey, it's just that simple," according to the National Honey Board. "A bottle of pure honey contains the natural sweet substance produced by honey bees from the nectar of plants or secretions of living parts of plants.  Nothing else." The 60,000 or so bees in a hive may "collectively travel as much as 55,000 miles and visit more than two million flowers to gather enough nectar to make just a pound of honey!"

The United States is home to more than 300 unique kinds of honey, according to the National Honey Board. Among the most popular? Clover and orange blossom. 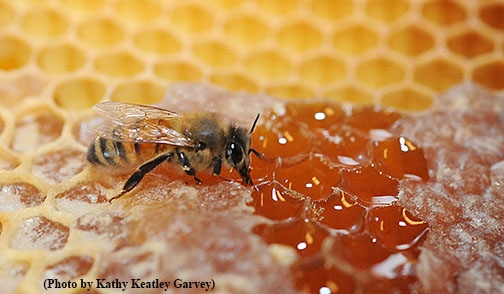 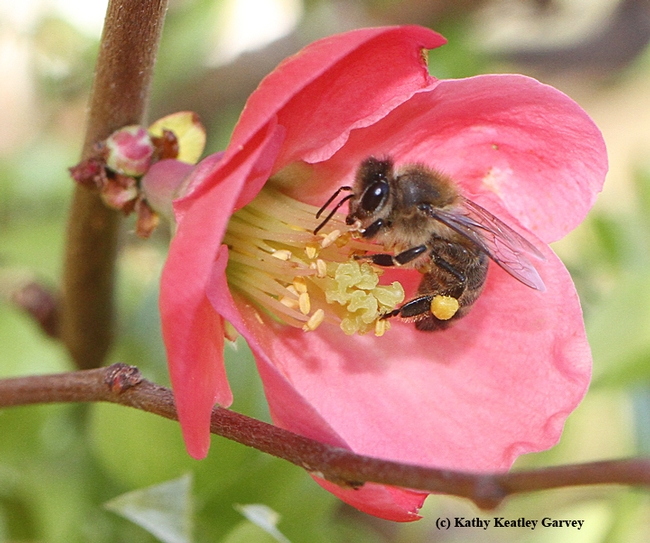 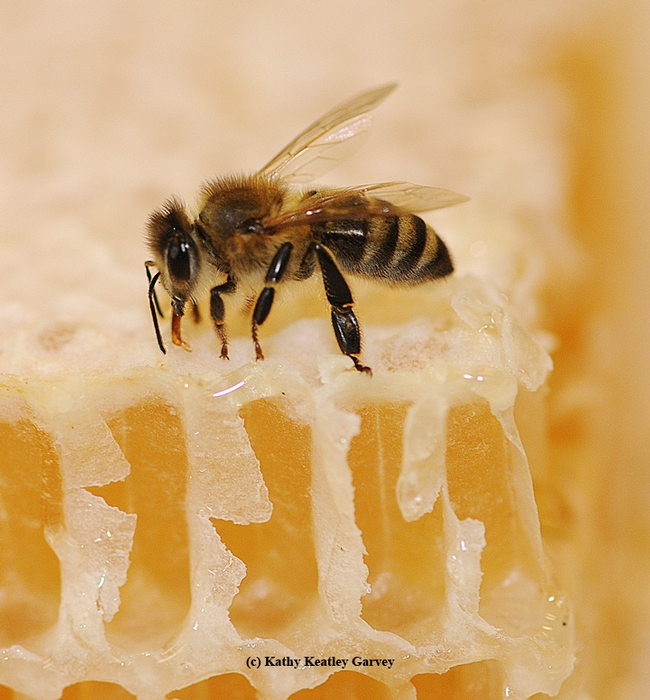