Just call it "Fire and Fury in a Pollinator Garden."

That would be the firecracker red flameskimmer dragonfly, Libellula saturata.

They fly into our pollinator garden in Vacaville, Calif., attracted by the lily-padded pond and the all-you-can-eat buffet of flying insects.

They snag their prey in flight--usually a native bee or syprhid fly--and perch on a bamboo stake to eat it.

Table for one, please! No, waiter, I don't need a napkin. Thank you, though.

Native to North America, they are a delight to see and photograph. Sometimes they allow multiple close-up images and that's when we turn into a paparazzi! (To be honest, we'd rather take images of low-flying dragonflies than of high-profile people.)

If you've ever thought about the dragonfly being a perfect design for a helicopter, you'd be right.

Check out the website, "Design and the Universe," for its informative piece on "The Dragonfly: The Inspiration for the Helicopter."

"The wings of the dragonfly cannot be folded back on its body. In addition, the way in which the muscles for flight are used in the motion of the wings differs from the rest of insects. Because of these properties, evolutionists claim that dragonflies are "primitive insects."

"In contrast, the flight system of these so-called 'primitive insects' is nothing less than a wonder of design. The world's leading helicopter manufacturer, Sikorsky, finished the design of one of their helicopters by taking the dragonfly as a model.6 IBM, which assisted Sikorsky in this project, started by putting a model of a dragonfly in a computer (IBM 3081). Two thousand special renderings were done on computer in the light of the manoeuvres of the dragonfly in air. Therefore, Sikorsky's model for transporting personnel and artillery was built upon examples derived from dragonflies."

"The body of a dragonfly looks like a helical structure wrapped with metal. Two wings are cross-placed on a body that displays a colour gradation from ice blue to maroon. Because of this structure, the dragonfly is equipped with superb manoeuvrability. No matter at what speed or direction it is already moving, it can immediately stop and start flying in the opposite direction. Alternatively, it can remain suspended in air for the purpose of hunting. At that position, it can move quite swiftly towards its prey. It can accelerate up to a speed that is quite surprising for an insect: 25mph (40km/h), which would be identical to an athlete running 100 metres in the Olympics at 24.4mph (39km/h).

"Following the collision, the rear legs of dragonfly take on the role of its most lethal weapons. The legs stretch forward and capture the shocked prey, which is then swiftly dismembered and consumed by powerful jaws."

As for our little male flameskimmer, our firecracker red dragonfly, we watched him ambush prey, unleashing his special brand of fire and fury in a pollinator garden.

Fire and fury in a pollinator garden... 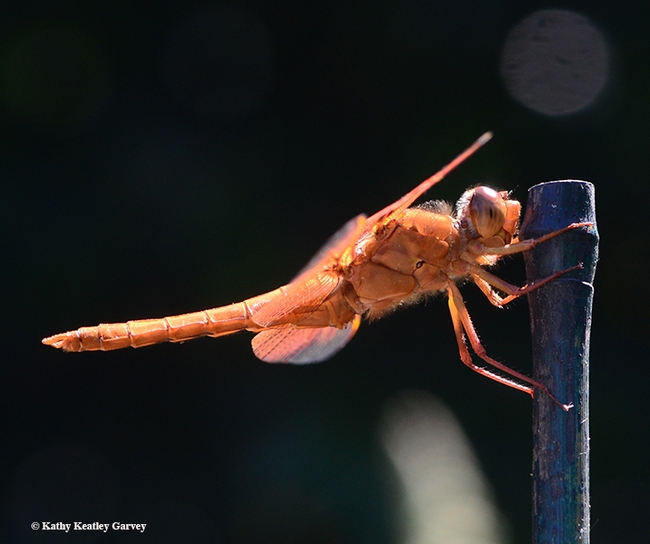 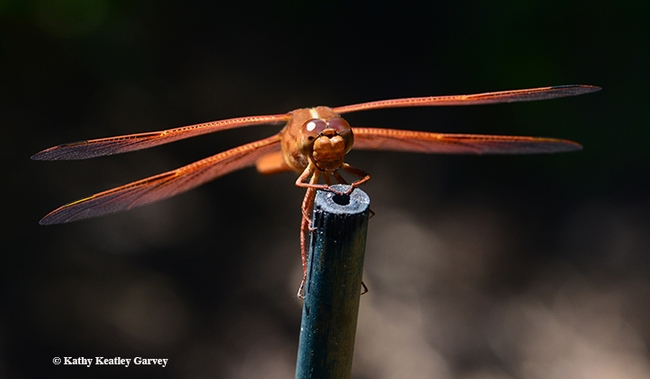 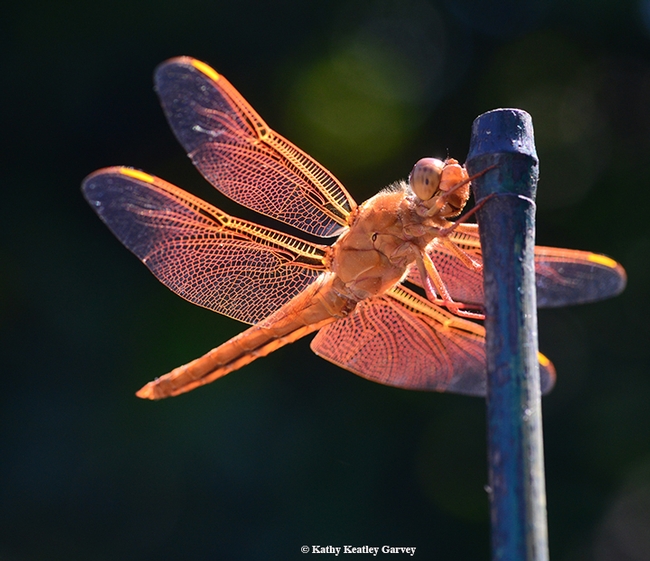 She's in Vacaville, Calif., and the garden she is visiting today is a veritable oasis of blooms: Mexican sunflower (Tithonia rotundifolia), butterfly bush (Buddleia davidii) and lavender (Lavandula). And it's filled with bees.

The predator is hungry. Ah, what's that? She glides from her perch, her wings glowing in the morning sunshine. She circles the garden and quickly returns with a pollen-laden bee in her mouth.

She ignores the photographer sitting a few feet from her and begins to eat.

But what bee? What bee is on the dragonfly menu?

"But what species?" asked Lynn Kimsey, director of the Bohart Museum of Entomology and professor of entomology at UC Davis.

Here's another angle (first photo below), showing the head.

That's all it took. "The bee is a female of Halictus ligatus, based on the head shape, especially the pointed part of the back right side of the head," Thorp said.

Amazing. Who would know that?

Robbin Thorp knows bees like we know the way home. World-renowned for his bee expertise, he co-authored of  California Bees and Blooms: A Guide for Gardeners and Naturalists, and Bumble Bees of North America: An Identification Guide and co-teaches at The Bee Course, an American Museum of Natural History workshop held annually at the Southwestern Research Station, Portal, Ariz. The workshop is geared for conservation biologists, pollination ecologists and other biologists who want to gain greater knowledge of the systematics and biology of bees. This year's workshop is set Aug. 21-31.

Meanwhile, the dragonfly polishes off her meal, gazes at the photographer (What, are you still here? Sorry, I don't share!), and off she goes, zigzagging over the garden.

She will be back. She's punched only one hole of his meal ticket. Many holes--and many bees--remain. 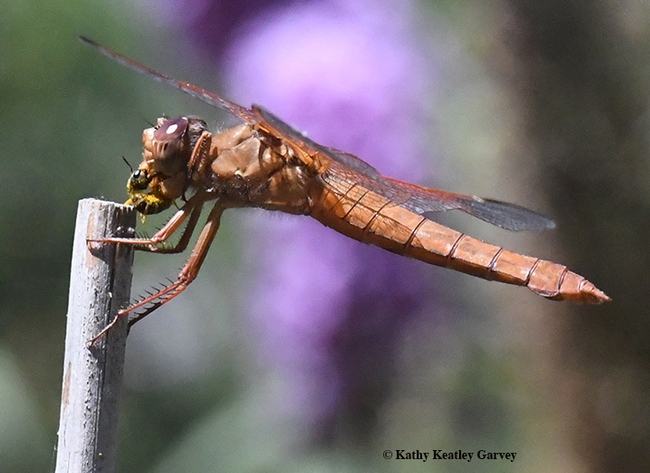 A red flameskimmer dragonfly (Libellula saturata) with her prey, a female sweat bee, Halictus ligatus, as identified by Robbin Thorp, distinguished emeritus professor of entomology at UC Davis. The gender of the flamekimmer identified by Kathy Claypool Biggs. (Photo by Kathy Keatley Garvey) 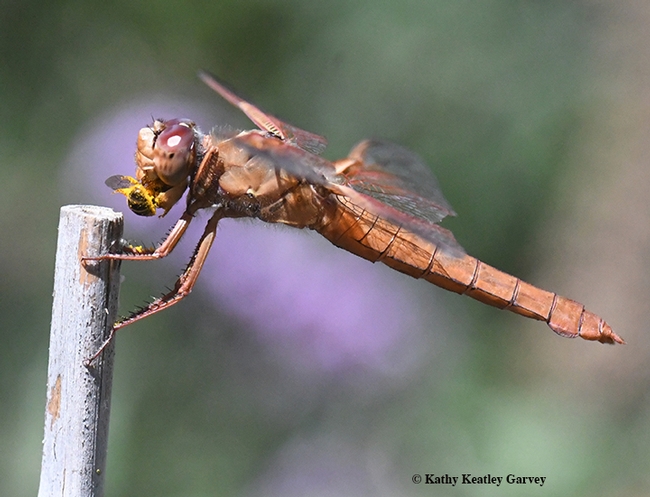 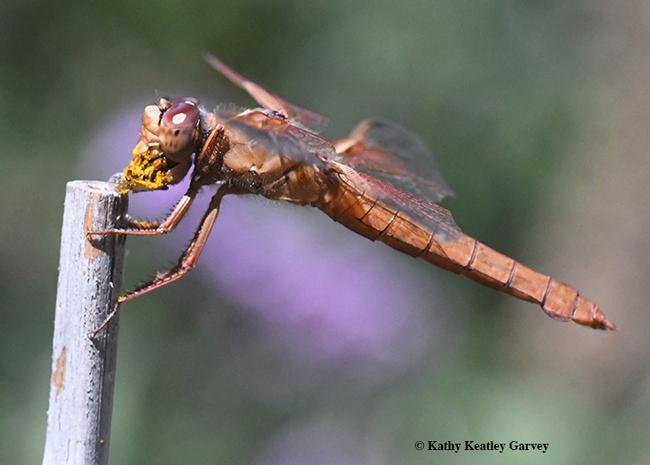 Beneath all of that pollen is a female sweat bee, the prey of this red flameskimmer. (Photo by Kathy Keatley Garvey) 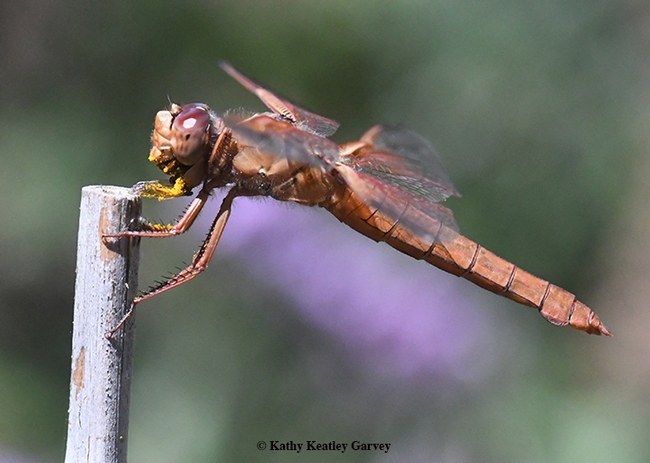 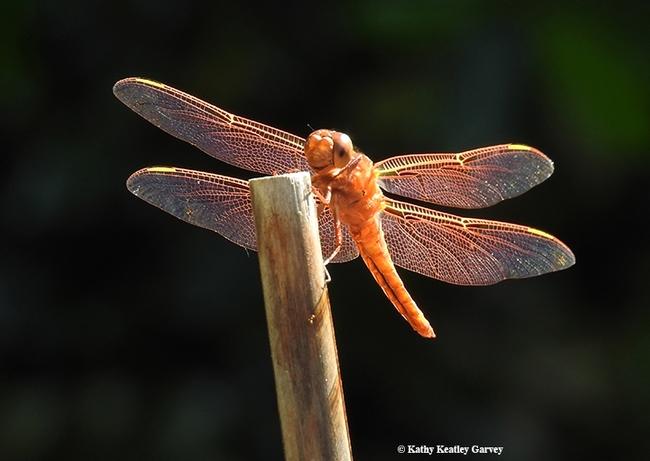 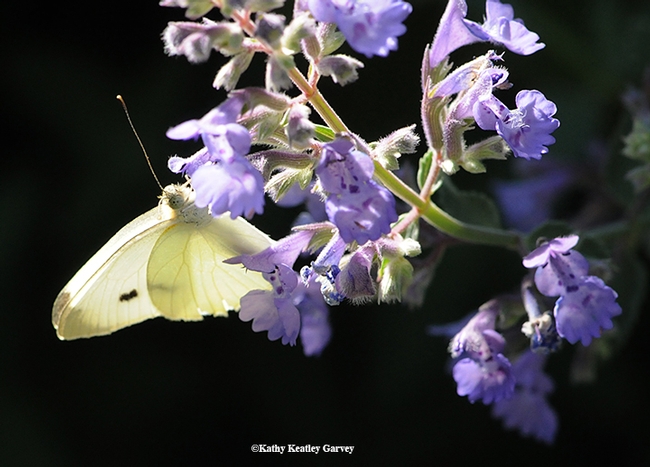 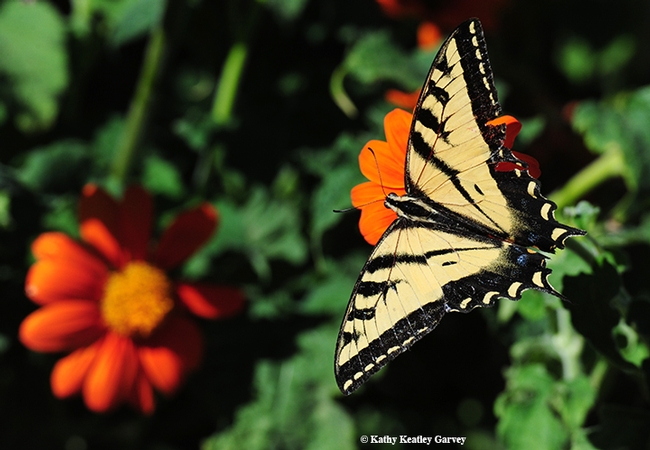 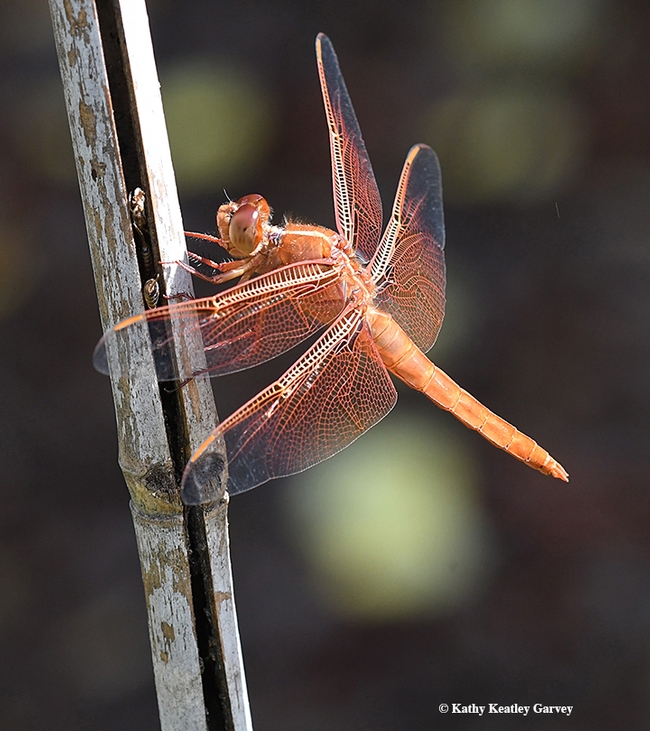 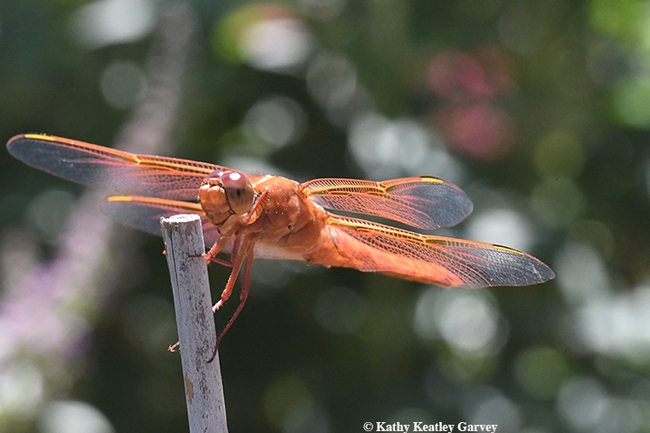 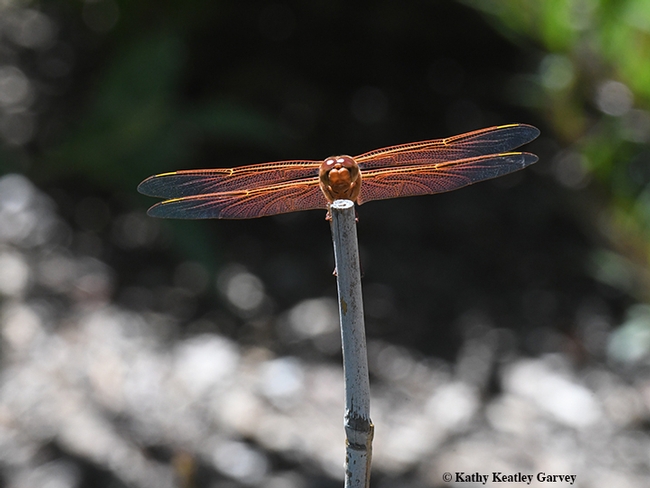 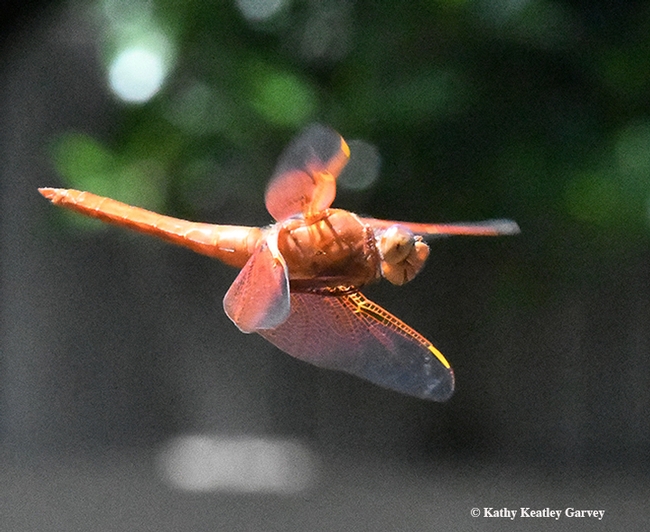 If the Fourth of July had its own insect, it would be the firecracker red flameskimmer. It's so showy and eye-popping red that it almost looks patriotic. Or at least it should be flying over an Independence Day parade while a band plays "Yankee Doodle Dandy."

On a breezy day in the late spring, we can usually count on a flameskimmer or two entering our yard. Of course it helps if you have a pond and a pollinator garden and some bamboo stakes. They hover over our pond, turn the pollinator garden into their dining room, and perch on the stakes to eat their prey.

We managed to capture a few images of this one last weekend as it helicoptered from bamboo stake to bamboo stake. It "posed" against a shade-cloth fence, a pink background of Jupiter's beard, and with a little aperture changing, against a black background.

It stayed for a couple of hours.

More than enough to strike up a band to play "Yankee Doodle Dandy." 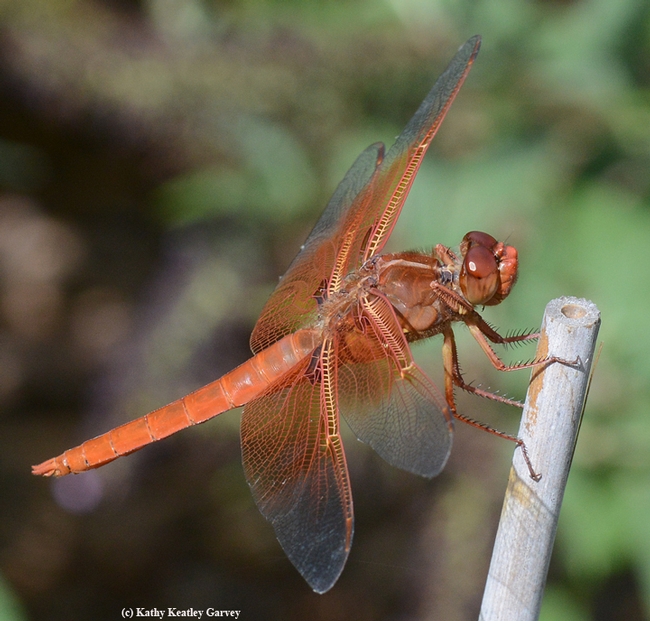 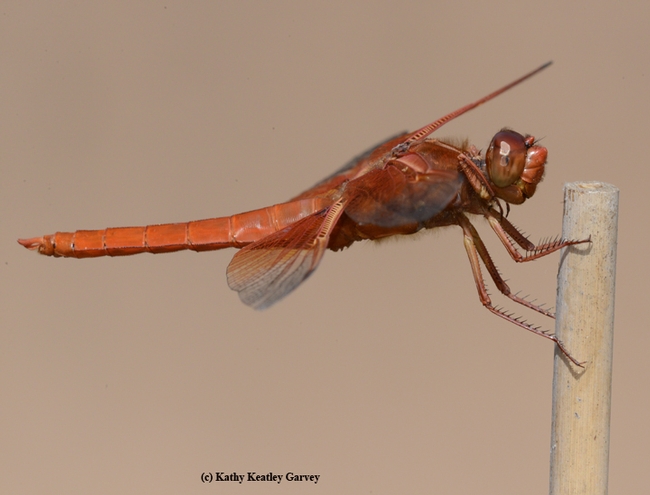 Red flameskimmer dragonfly against a solid background: a fence covered with a shade cloth. (Photo by Kathy Keatley Garvey) 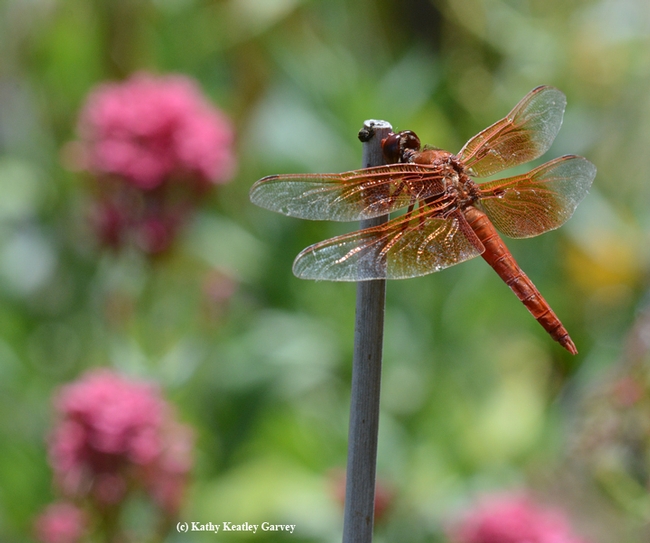 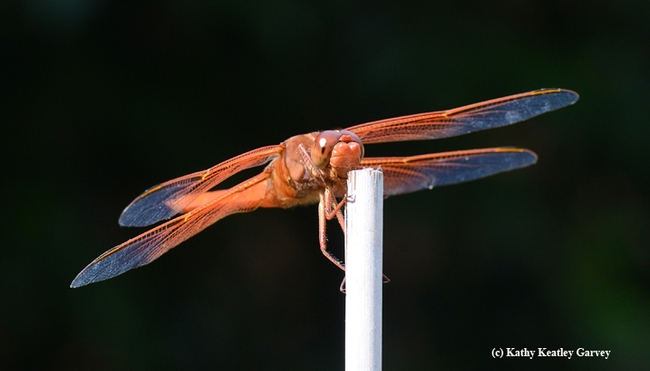