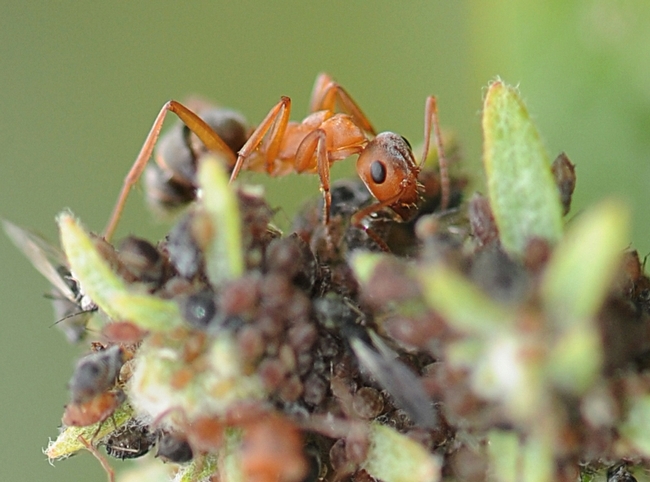 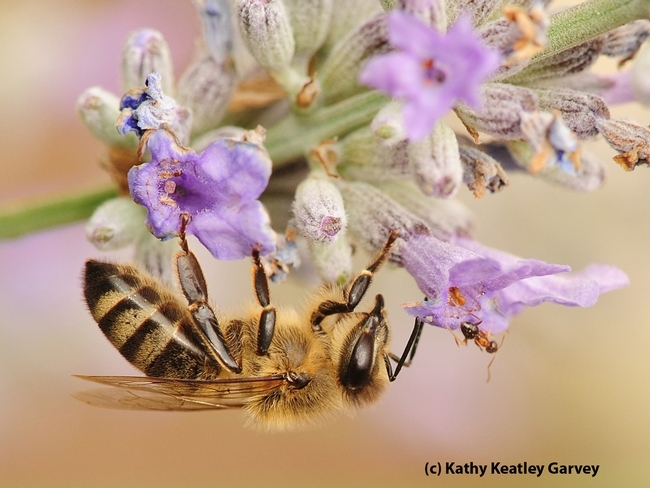 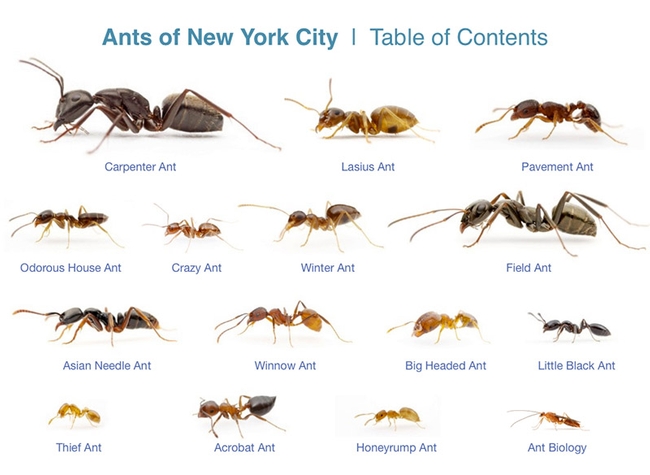 We watched a honey bee foraging on lavender blossoms last weekend, when an ant appeared on the scene. The ant? A worker of Liometopum occidentale (velvety tree ant), according to ant specialist Phil Ward, professor of entomology at the University of California, Davis.

If you don't know much about ants, but have always admired them, then "Dr. Eleanor's Book of Common Ants," is for you.

In a recent Myrmecos blog, Wild describes the book as "an entry-level ebook written for the general naturalist curious about ants. Dr. Eleanor recounts stories of the most common species seen in the southeastern United States, interspersed with photographs from my galleries."

"It’s the kind of book you give to the young naturalist who wonders about the ants on the sidewalk," Wild says, "or perhaps to that grumpy uncle who never quite seems to get what it is you are doing in graduate school studying the little creatures."

And, guess what? The Dr. Eleanor/Dr. Alex book is free to download. One way to receive it is to access the Myrmecos blog and click on the I-Tunes and/or PDF links.

Rice relates that she's always been fascinated by ants. So is Andrea Lucky, who, like Wild, received her doctorate in entomology from UC Davis with Phil Ward.  Lucky heads the widely acclaimed citizen-scientist project, "The School of Ants." (The School of Ants project is based in the Lucky lab at the University of Florida's Department of Entomology and Nematology and the lab of Rob Dunn in Biology at North Carolina State University. (Email them at theschoolofants@gmail.com if you want to know more.)

But back to "Dr. Eleanor's Book of Common Ants." It's fascinating. It's riveting. It's superb.  The easy-to-read text and the amazing photos draw you in. You can literally feel the excitement, enthusiasm and passion when Dr. Eleanor asks "What's the big deal about ants?"

"We might not notice them, but ants surround us, occupying nearly every type of habitable nook and cranny across the glove," she writes. "Right now, ants snuggle up to your house, lay out their doormats in front of the trees in your yard, and snooze under your park benches. Some even nest inside the acorns littering the ground."

"We might not notice them, but they're there, and they shape, literally shape, our world," she points out.

And if you look closely in your own back yard, you just might see an ant and a bee sharing a lavender blossom. 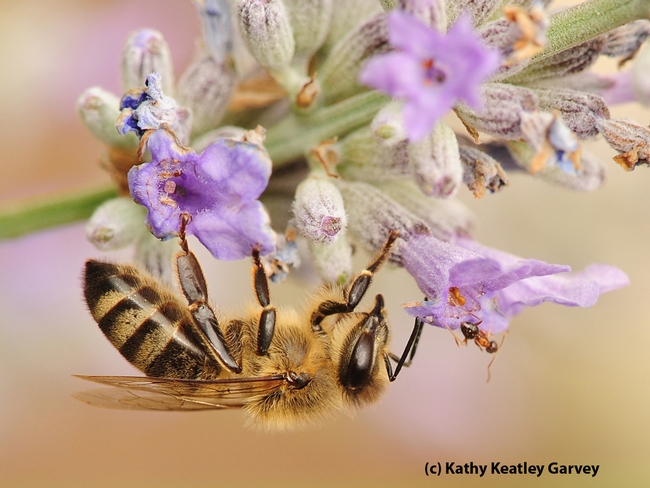 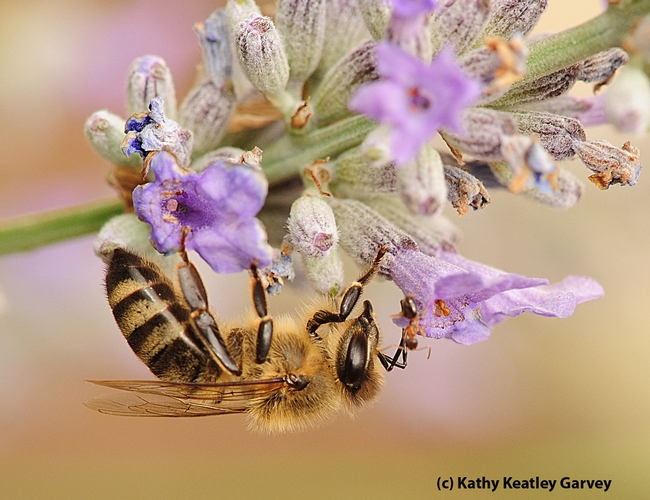 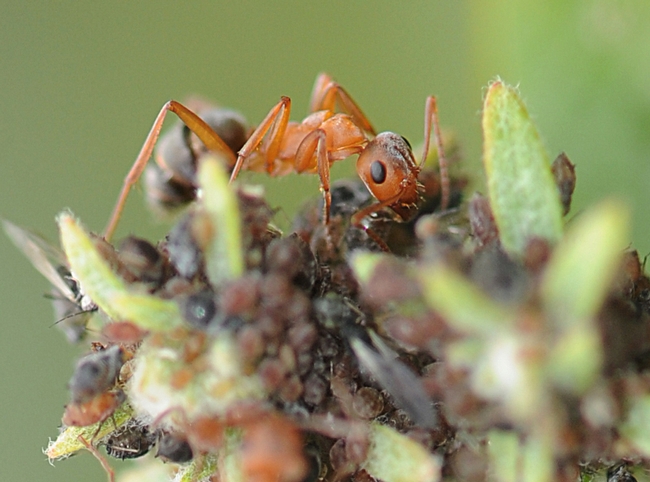 Close-up of aphids and ants at the Haagen-Dazs Honey Bee Haven at UC Davis. This is a Formica moki, a native ant. (Photo by Kathy Keatley Garvey)
Tags: Alex Wild (19), Andrea Lucky (7), Phil Ward (24), School of Ants (1)
Comments: 0
Following the Trail of Ants

andrealuckysmall
When the ants come marching in, Andrea Lucky will be right there.

Ant specialist Andrea Lucky, who will receive her doctorate in entomology on June 10 from UC Davis, will speak on the evolutionary history of ants on Wednesday, May 12 in 122 Briggs, UC Davis.

This is her "exit seminar" but it's doubling as part of the spring seminar series. Her talk, from 12:10 to 1 p.m., will be Webcast live. To tune in, access this site.

She researches the evolutionary history of ants in the geological complex region of Australasia, Melanesia and the islands of the Western Pacific.

“I use a combination of traditional morphological taxonomy and molecular phylogenetics to interpret how, when and where individual lineages diversified within this complex landscape,” said Lucky, who maintains a research website and studies with major professor Phil Ward.  “In addition to my work on the biogeography of ants, I am also involved in biodiversity assessment and conservation using ants in Papua, New Guinea.”

You can watch a mini- interview of her in New Guinea on YouTube.

Lucky completed her undergraduate degree at Brown University in Providence, RI, where she  majored in biology with an emphasis on ecology and evolutionary biology.

After receiving her bachelor’s degree, she traveled to Ecuador as a Fulbright Fellow, where she  worked with insects in the Amazon.

Lucky entered the doctorate program in the UC Davis Department of Entomology in 2004 and completed her degree in the lab of Phil Ward.

After receiving her Ph.D., she will move on to a postdoctoral scholarship at North Carolina State University, Raleigh, where she will work with Rob Dunn on a project examining geographic variation in ants and the processes they mediate.

If you miss any of the UC Davis Department of Entomology webcasts, they're archived.

These webcasts are a good resource for entomologists, would-be entomologists, and folks of the curious-sort who just want to learn more about the exciting world of science.

And, somewhere out there, there's another young entomologist who will follow in Andrea Lucky's footsteps...trailing ants. 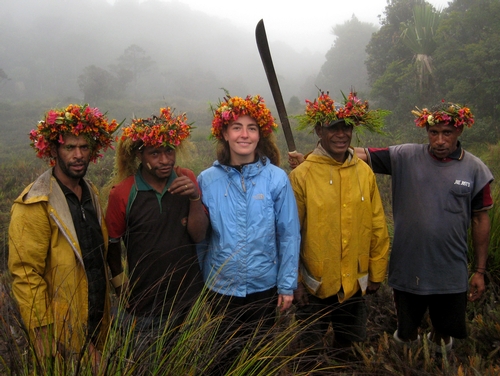 Andrea Lucky in New Guinea
ANDREA LUCKY (center) in New Guinea in September 2009 with her field team, on a Conservation International Rapid Assessment Project (RAP). She'll discuss her work at her May 12 presentation in 122 Briggs Hall, UC Davis. The lecture is from 12:10 to 1 p.m. and will be webcast. 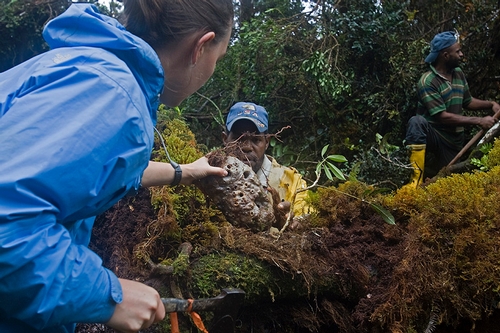