Hazeltine, a U.S. Navy veteran who studied entomology in the UC Berkeley graduate program, 1950-53, and received his doctorate in entomology from Purdue University in 1962,  managed the Lake County Mosquito Abatement District from 1961-64 and the Butte County Mosquito Abatement District from 1966-1992. He was an ardent supporter of the judicious use of public health pesticides to protect public health. He continued work on related projects until his death in 1994.

His legacy lives on through his family's establishment of the Bill Hazeltine Student Research Awards to UC Davis graduate student researchers.  Since 1997, the awards have totaled a little over $46,000 to 25 recipients.

Sandy Olkowski, Stephanie Kurniawan and Maribel "Mimi"  Portilla, graduate students in the Department of Entomology and Nematology, received the coveted awards in both 2015 and 2016.  The three recently lunched at a Davis restaurant with Hazeltine's sons, Craig of Scottsdale, Ariz.,and Lee Hazeltine of Woodland.  The graduate students discussed their research and goals and thanked them for the Hazeltine family's support. William Hazeltine in U.S. Navy, 1944
It's exciting to see the research that the graduate students are undertaking and the goals they have established. Some capsule information:

"For example, environmental manipulation is a classic pest control technique, yet the indirect effects of changing the environment are not always well understood," Portilla said. "I am focusing on how the management practices of the invasive exotic weeds, Brazilian waterweed (Egeria densa) and water hyacinth (Eichhornia crassipes), in the Sacramento-San Joaquin Delta impact mosquitoes and their habitat. My goal is to better understand the ecology of these management practices in order to inform and create better techniques to reduce both mosquito and weed problems."

We all know that graduate students scramble for funds to complete their research and education.  Sometimes they have little or no funds. What a wonderful project the Hazeltine family sponsors!

"He was a medical entomologist who had a varied career in the field of mosquito biology and control, but he will forever be remembered as a man who fought in the trenches of the pesticide controversy from 1960 until the end of his life, and who made the safe and efficient use of pesticides in public health a personal crusade," Eldridge said. 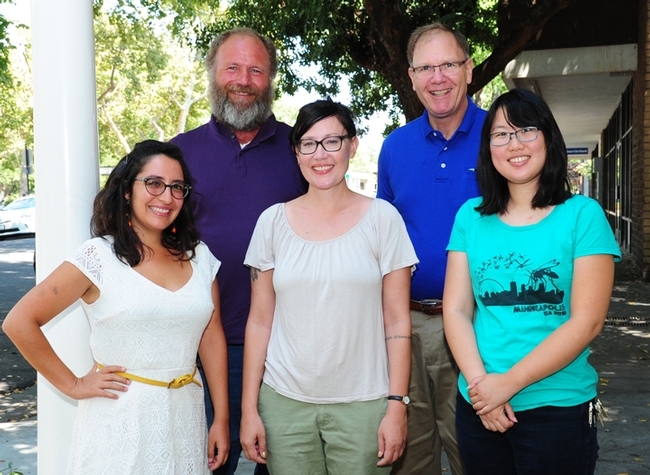 Remember William "Bill" Reeves? A renowned entomologist, professor and dean at UC Berkeley, he was widely regarded as the world's foremost authority on the spread and control of mosquito-borne diseases.

His legendary work continues in the form of the William C. Reeves New Investigator Award, a statewide award given to the best scientific paper submitted and presented at the annual Mosquito and Vector Control Association of California conference.

This year the winner of the Reeves New Investigator Award holds special significance.

Tara Thiemann, the 2010 recipient of the Reeves New Investigator Award, studies with Reisen, her major professor.

Thiemann, a doctoral candidate in the UC Davis Department of Entomology, won the award for her work,  “Evaluating Trap Bias in Blood Meal Identification Studies,” She received $1000 and a plaque at the 78th annual MVCAC meeting, held in Sacramento.

This is crucial research, as infected Culex mosquitoes transmit West Nile virus and other killer diseases.

Thiemann, who joined the Entomology Graduate Program in 2004, received her bachelor's and master's degree in biology from Truman State University, Kirksville, Mo.  In 2008 she won a William Hazeltine Student Research Fellowship for her Culex mosquito studies.

M. Veronica Armijos, a doctoral student in comparative pathology, won second place with her presentation on “Distribution and Prevalence of Novel Flaviviruses in California.” She received $500.

Christy Andrade, a doctoral candidate in the Microbiology Graduate Group, won third for her presentation on "Effect of Temperature on West Nile Virus Replication in Different Host Cell Types:  Potential for Altered Transmission Cycles in California." She received $250.

The students are advised by Reisen and Aaron Brault of the CVEC faculty. Brault is an adjunct associate professor in the Department of Pathology, Microbiology and Immunology, UC Davis School of Veterinary Medicine, and a research microbiologist, Centers for Disease Control and Prevention (CDC).

Eldridge remembers collecting many a skeeter with Reeves (see photo below). 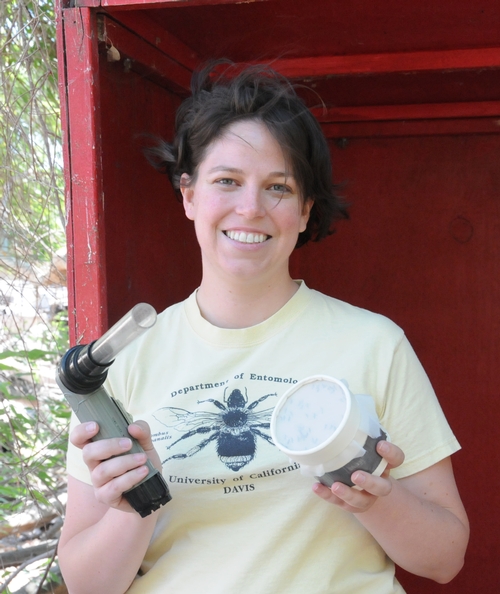 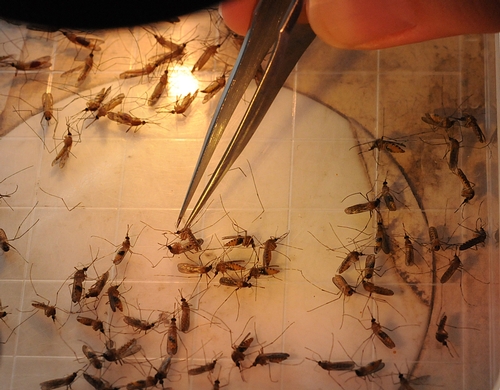 In the Lab
IN THE LAB--Mosquito researcher Tara Thiemann sorts through her collection of mosquitoes that she had earlier trapped in the field. (Photo by Kathy Keatley Garvey) 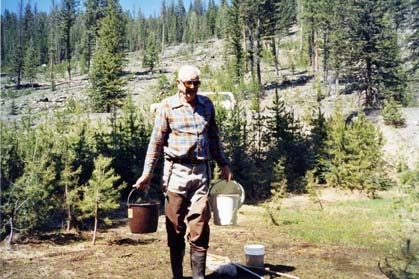 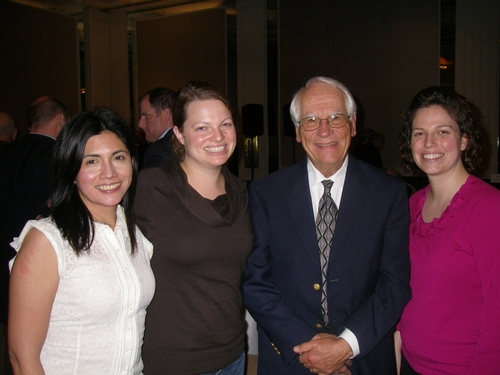