A hand-crafted Christmas ornament, the work of Helen Mussen. (Photo by Kathy Keatley Garvey)
There's no doubt about it.

Honey bee guru Eric Mussen, Extension apiculturist with the UC Davis Department of Entomology and Nematology since 1976 and an upcoming retiree, will be "roasted" at the California State Beekeepers' Association conference, to be held Nov 19-21 at Lake Tahoe, Nev.

But someone will be going home with a little piece of him.

Mussen is donating an auction item, a mounted photo of "The Sting," also known as "The Bee Sting Felt Around the World."

What's the story behind the story? It was like this: During a lunch hour a couple of years ago, Mussen and I were walking through the apiary of the Harry H. Laidlaw Jr. Honey Bee Research Facility when he said: "Kathy, get your camera ready. This bee is about to sting me."

The bee was NOT about to sting him--the bee WAS stinging him. It was one of bee scientist Susan Cobey's Carniolan bees, doing what bees do--defending the hive.

I shot a series of four photos within a second with my Nikon D700, mounted with a 105mm macro lens and a motor drive.

The second photo in the series went on to win best feature photo and the professional skill award in a competition hosted by the international Association for Communication Excellence, a professional organization comprised of communicators, educators and information technologists in agriculture, natural resources, and life and human sciences. The Sacramento Bee picked it up and later selected it one of its top 15 stories of 2012. Huffington Post named it one of the Most Amazing Photos of 2012. More accolades followed: Twister Sifter singled it out as one of the World's Most Perfectly Timed Photos. Along the way, it made "Picture of the Day" on scores of websites.  (Bug Squad blogs about this image: The Sting, Perfectly Timed Photos, and The Bee Sting Felt Around the World.)

The copyrighted photo also appears to be one of the most stolen images on the internet. It's gone around the world innumerable times, mostly uncredited or with its copyright ripped off or replaced with someone else's copyright.

Photo aficionados marveled at the "one-of-a-kind" photo of a bee sting in action, with its abdominal tissue trailing. Others said it was Photoshopped. Not! Some said I spent the day torturing bees. Not! I don't kill bees; I photograph them. Some  pitied the "poor guy" getting stung and asked how could I be so cruel as not to help him. Not what happened!

Mussen's wife later presented him with a mousepad, a coffee cup and a handmade Christmas ornament of the image. It's quite a conversation piece in Mussen's office on the third floor Briggs Hall. But it won't be for long. Mussen will be vacating his quarters and retiring in June of 2014.

But, back to the California State Beekeepers' Association.

Mussen's colleagues are going to roast him, sure as shootin' (or maybe sure as stingin'). They'll joke about his Buddy Holly glasses in the 1970s, his amicable personality, and his inability to keep in contact via cell phone (he doesn't carry one).

But someone, sure as shootin' (or maybe sure as stingin') is going home with a piece of him. 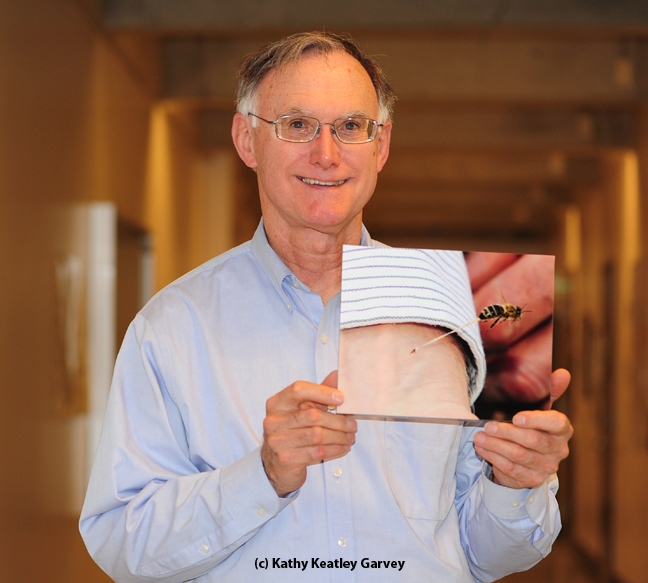 Eric Mussen and the famous bee sting photo showing a bee stinging his wrist. This mounted photo will be auctioned off at the California State Beekeepers' Association conference. (Photo by Kathy Keatley Garvey) 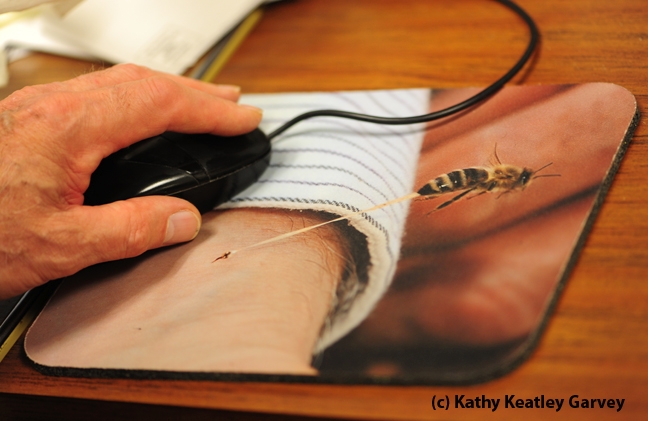 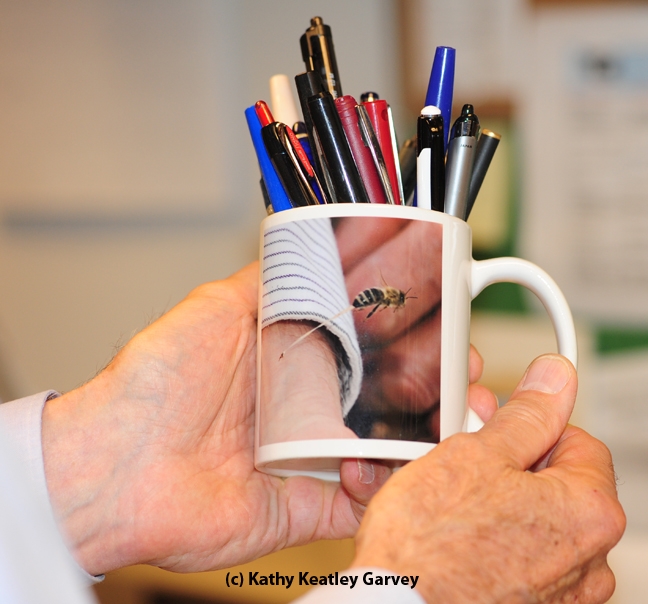 It will be a gathering of beekeepers next week in California.

And it promises to be informative, educational and inspiring.

Assistant professor Brian Johnson and Extension apiculturist Eric Mussen of the UC Davis Department of Entomology will speak at the 2012 California State Beekeepers Association’s annual convention, set Nov. 12 through Nov. 15 in Cabazon. The meeting will take place in the Morongo Casino Resort and Spa.

Johnson will discuss “Completed and Ongoing Research at the Laidlaw Bee Research Facility” during the Nov. 15th session. He will be presenting information on two sets of experiments he and his associates conducted at the Harry H. Laidlaw Jr. Honey Bee Research Facility, headquartered on Bee Biology Road.

“First we collected data suggesting that high fructose corn syrup blends are not harmful to colonies and that they may even be preferable to sucrose solution in the context of commercial beekeeping,” Johnson said. “Second, we showed that rates of multiple and single viral infection are higher in commercial beekeepers than in queen breeders or small scale hobbyists. This suggests that management practices can strongly affect rates of pathogen infection and that future efforts should be directed to mitigating these effects.”

Mussen, who also serves as parliamentarian on the CSBA governing board, will speak on “Honey Bee Nutrition” on Tuesday, Nov. 13 and “Keeping Your Bees in the Hive” on Wednesday, Nov. 14.

“The nutrition talk basically is to provide the beekeepers with information on the complexity of nutrients that are found in both pollens and nectars of various blooming plants,” Mussen said. “The complexity of the macro- and micro-nutrients is what makes the pollens so valuable to a complete bee diet.  The complexity also is the reason why we have not developed a man-made substitute that can adequately replace pollens in honey bee diets.”

“In the honey bee colony’s quest to obtain adequate nutrition, the foraging bees visit an acre equivalent of flower blooms that they seek out in the 50-square mile area over which the foragers can range,” Mussen said.

In his other talk, “Keeping Bees in the Hive,” Mussen will discuss how “not to allow honey bee colonies to swarm.” He also will tell why strong colonies require an abundant supply of good pollens and nectar all the active season. “And  finally, I will mention ways in which bees can be confined to the hive for short periods of time to avoid pesticide exposure or for moving the hives to new locations.”

Following the board of directors’ meeting--time permitting--Mussen will deliver a talk on “Africanized Honey Bees,’ tracing the history of the bees to 1956 when entomologist/professor Wawick Kerr imported 26 queen honey bees into Brazil from South Africa. Warwick hoped to hybridize tropical (African) and temperate climate (European bees) to obtain high honey production and better disposition. However, a beekeeper inadvertently released some of the descendants into the Western Hemisphere and they are now established in southern California and moving into central California.

Some of the bees trucked from all over the country, including Arizona and Texas, to pollinate California's 800,000 acres of almonds are Africanized bees.

So, beekeepers will hear about research, malnutrition, pests, parasites, pesticides, diseases, migratory stress and other topics. 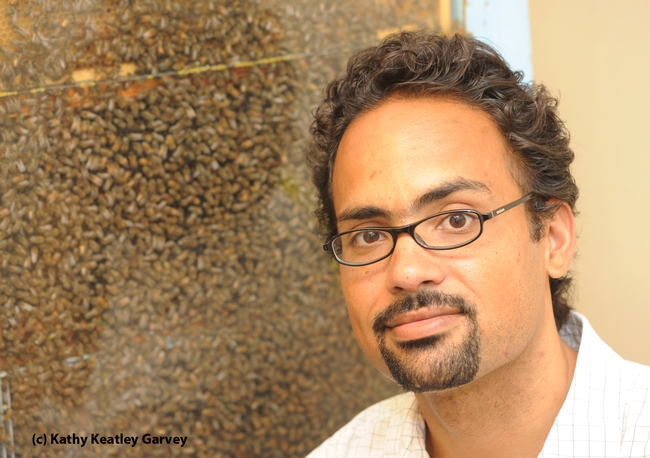 Bee scientist Brian Johnson of the UC Davis Department of Entomology in front of an observation hive. (Photo by Kathy Keatley Garvey) 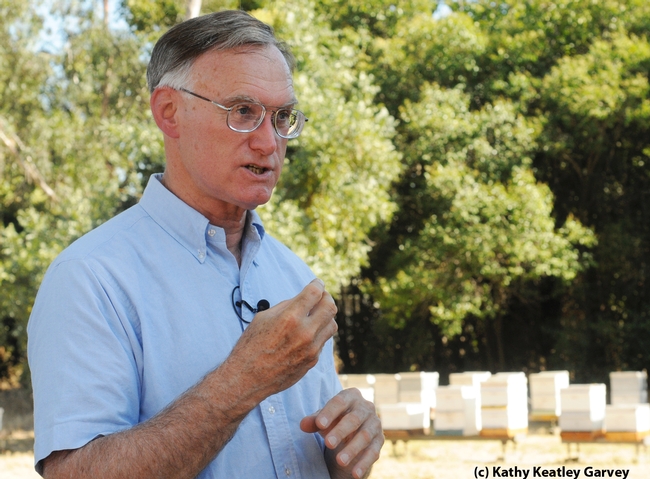