Is the overwintering monarch butterfly population along California's coast increasing or decreasing?

"So far,  far the picture is rather mixed for the number of monarchs in California," according to Matthew Shepherd, communications director for the Xerces Society for Invertebrate Conservation. "More than 130 sites have been surveyed," he told us today. "Northern sites have more butterflies that last year, other sites fewer, and there are many southern sites that haven't yet reported data. A full analysis will be available in January."

The western monarchs, that is those that west of the Rockies, migrate to the California coast to overwinter while the eastern monarchs head to the mountains of central Mexico.

In a news release issued today from its headquarters in Portland, Ore., the Xerces Society said that early data from its Western Monarch Thanksgiving Count suggests "a small increase in butterfly numbers in some parts of the overwintering range."

That is, 2015 may have "been a better year for the beleaguered monarch butterfly in the western United States."

"The overall population size is still far lower than it was in the 1990s, when more than one million butterflies were counted," the news release said. "The surveys indicate that sites north of Santa Cruz are hosting more butterflies than previous years, whereas sites in Monterey, San Luis Obispo, and Santa Barbara counties are reporting fewer numbers of butterflies on average. Several new sites have been reported, including some from Marin County with up to 10,000 monarchs. The data is not yet available for Santa Cruz County and southern California."

The Xerces Society launched its Western Monarch Thanksgiving Count in 1997. This year some 85 volunteers surveyed more than 130 sites over a three-week period centered around Thanksgiving.

We'll all have to wait until January to see the final tallies.

Meanwhile, we were happy to see monarchs roosting in November in the Berkeley Aquatic Park  (for the first year ever) and on Mare Island, Vallejo, (maybe also first?) but those clusters may be temporary.  As butterfly guru Art Shapiro, distinguished professor of evolution and ecology at the University of California, Davis, says--they may move on as soon as the weather turns foul.

Maybe they're on their way to Santa Cruz?

"There are some sites where monarchs gather in fall, almost like staging posts in preparation for moving to overwintering locations," Shepherd told us.

Where can you observe the overwintering monarchs in California? The Xerces Society has kindly provided a web page with links to overerwintering sites in Alameda, Santa Cruz, Monterey, San Luis Obispo and Santa Barbara counties. 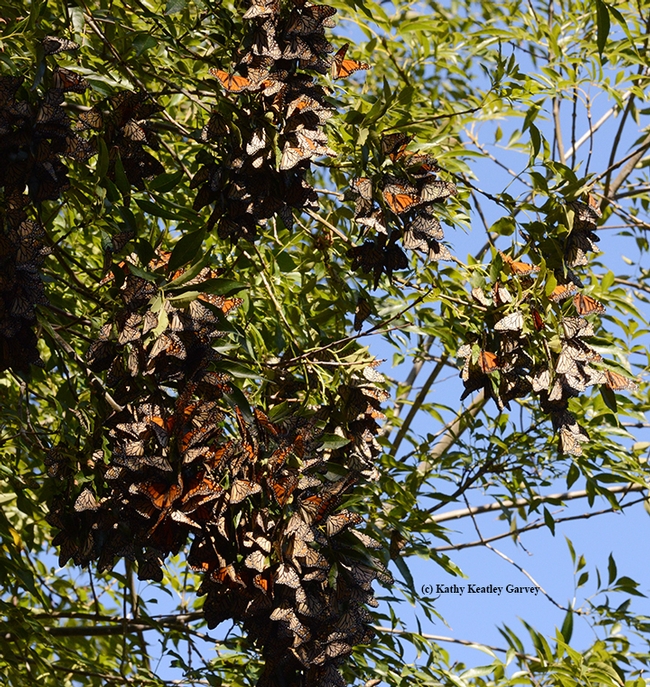 Monarch butterfly roosting in Berkeley Aquatic Park in November. They are at the 14th disc golf course in an ash tree. (Photo by Kathy Keatley Garvey) 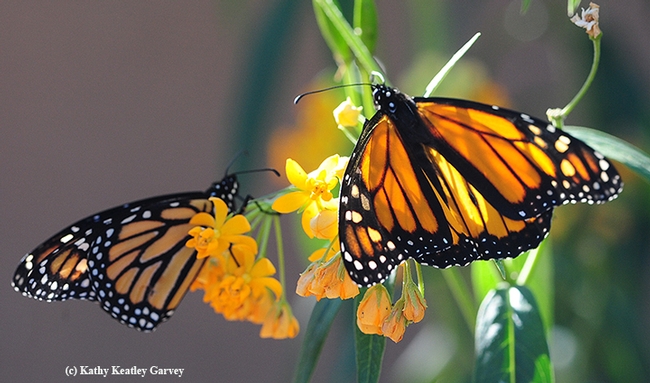