Bug Squad
sitenum=63
Happenings in the insect world
Davis Teen: How Those Pesky Mosquitoes Led to a Scientific Publication

Helena Leal recently received a scholarship from the Mexican-American Yolo County Concilio and recognition from the California State Senate and Assembly. (Photo by Kathy Keatley Garvey)
Listen to ABC Channel 10 News, broadcast Dec. 22
Seventeen-year-old Helena Leal doesn't like mosquitoes, but they like her.

“I always get bitten by mosquitoes more often than my family and friends,” says the Davis High School senior. “I get fairly bad reactions to mosquito bites, including swelling and itching, so I always have to be meticulous in using repellents.”

Thanks to her lifelong interest in those pesky female mosquitoes that target her for a free (blood) meal, Helena Leal now joins the ranks of published scientists. She's the lead author of UC Davis-based research published Dec. 21 in the journal Nature Scientific Reports.

“It was great to have the opportunity to do research addressing a question I've had ever since I was a child,” she said of the work, “Attraction of Culex Mosquitoes to Aldehydes from Human Emanations,” completed in the UC Davis Department of Molecular and Cellular Biology lab of her father, chemical ecologist Walter Leal. In addition to the father-daughter team, co-authors are UC Davis student researchers Justin K. Hwang and Kaiming Tan of the Leal lab.

“Helena has always been curious about mosquito bites,” said her father, a distinguished professor who unravels the molecular mechanisms that make the olfactory system of insects so sensitive and selective. “Her research suggests that some people attract more mosquitoes—and receive more bites—because of their ratio of aldehydes, not because of natural repellents. We all produce these aldehydes but their ratios differ from person to person. The previous hypothesis is that people attract more mosquitoes because they lack a natural repellent. We found that the natural repellent is not produced in enough amount to repel.”

“Our paper shows that the aldehyde ratio is very important,” Helena said. The researchers studied the southern house mosquito, Culex quinquefasciatus. Female mosquitoes feed on humans and other vertebrates to acquire nutrients to develop their eggs, she noted. Infected mosquitoes can transmit such viruses as West Nile, Zika and the St. Louis encephalitis virus.

An article in the July 13, 2013 edition of the Smithsonian magazine related that an estimated 20 percent of people “are especially delicious for mosquitoes and get bit more often on a consistent basis.” The female Culex quinquefasciatus needs a blood meal develop her eggs. Infected mosquitoes can transmit such viruses as West Nile, Zika and the St. Louis encephalitis virus. (Photo by Kathy Keatley Garvey)
Regardless of the public interest, mosquitoes find their hosts by physical and visual cues, the researchers related. This can include heat and moisture, but more importantly, odorants.

Fellow researcher Kaiming Tan said he was "delighted to see Helena able to facilitate her learning in a laboratory setting with a team of university students at UC Davis, a world-class research institution." He praised her interests in asking scientific questions, leading to solutions, as "useful skills in her future education endeavors."

"Dr. Leal's continuing support and mentoring on this student-run research project motivate us to pursue our goals," Tan added. "It is my pleasure to be on this team and pass down my knowledge to the next generation of college students."

Almost a century ago scientists identified carbon dioxide CO2 as a primary mosquito attractant, and it's commonly used to trap bloodseeking female mosquitoes. “However, no evidence is available that suggests that CO2 mediates differential attraction, i.e., carbon dioxide emission levels do not explain the common observation that mosquitoes systematically prefer one person to another,” the research team wrote. They agreed that skin emanations “play a key role in the mosquito finding a host” and that “these emanations are complex in nature and contain hundreds of compounds, but as far as mosquitoes are concerned, a handful of compounds activate the mosquito's olfactory system.”

“Anecdotes related to preferential mosquito bites are very common, but to date there is no complete explanation as to why one out of two people systematically receives more mosquito bites than the other when both are equally accessible,” the researchers wrote in their abstract. They tested the hypothesis that two constituents of skin emanations, 6-methyl-5-heptan-2-one (6MHO) and geranylacetone (GA), are natural repellents and may account for differential attraction in different ratios. “We studied skin emanations from two human subjects, confirmed in behavioral assays that female southern house mosquitoes are significantly more attracted to subject A (attractant) than to subject N (nonattractant), and tested their 6MHO/ GA ratios 2/23 in a dual-choice olfactometer.”

“Although repelling at high doses, 6MHO/GA mixtures were not active at the levels emitted by human skin,” they wrote. “We found, however, differential attraction elicited by the aldehydes in the ratios produced by subjects A and N. When tested in a dose commensurate with the level released from human skin and in the ratio produced by subject A, the aldehyde mixture significantly attracted mosquitoes. By contrast, an aldehyde mixture at the same ratio released by subject N did not attract mosquitoes. We, therefore, hypothesized that aldehydes may play a role in the commonly observed differential attraction.”

Helena worked on the project during the summer and into the fall. The Davis High School scholar recently received a scholarship from the Mexican-American Yolo County Concilio at its recognition dinner and scholarship fundraiser. She told the crowd that she plans to major in cognitive science with a focus on artificial intelligence.

Her other interests? "I play lacrosse and tennis on my school teams, but I also love to dance. I currently spend a lot of time working on the school yearbook as an editor. I am a big fan of live music and I am learning how to play the guitar."

Her brother, Gabriel, now 20, also did research in the Leal lab and saw his work on the odorant-binding protein of the yellow mosquito published.  In addition, Gabriel worked on almond research (unpublished). Now a student at Dartmouth, Gabriel is majoring in economics and minoring in engineering and philosophy. Older brother Augusto, 26, holds a degree in political sciences from Princeton University with a minor in economics.

The Leal lab is “particularly interested in elucidating the roles of odorant-binding proteins, odorant receptors, and odorant-degrading enzymes,” said Leal, adding that “Insects are extremely successful animals whose lives intertwine with ours. They may be vegetarian and harmful to our food supply as well as vectors of pathogens that inflict tremendous suffering and human loses. Thus, a better understanding of the molecular basis of insect olfaction may facilitate the design of eco-friendly chemicals to controls insects of medical and agricultural importance.”

The Leal lab is credited with discovering the exact mode of action of DEET, “the gold standard” of insect repellents for the past six decades. “DEET doesn't mask the smell of the host or jam the insect's senses,” Leal said. “Mosquitoes don't like it because it smells bad to them. That's why they avoid it.” The also discovered the DEET receptor, which is also sensitive to plant defense compounds.

“It's interesting what will repel and what will attract mosquitoes,” said Helena Leal. “It appears that mosquitoes will always find me--and 20 percent of the rest of the population—as especially delicious. They're out for blood—our blood. Let's keep them at bay with repellents.”

(Editor's Note: Walter Leal is a fellow of the Entomological Society of America and former chair of the UC Davis Department of Entomology and Nematology.) 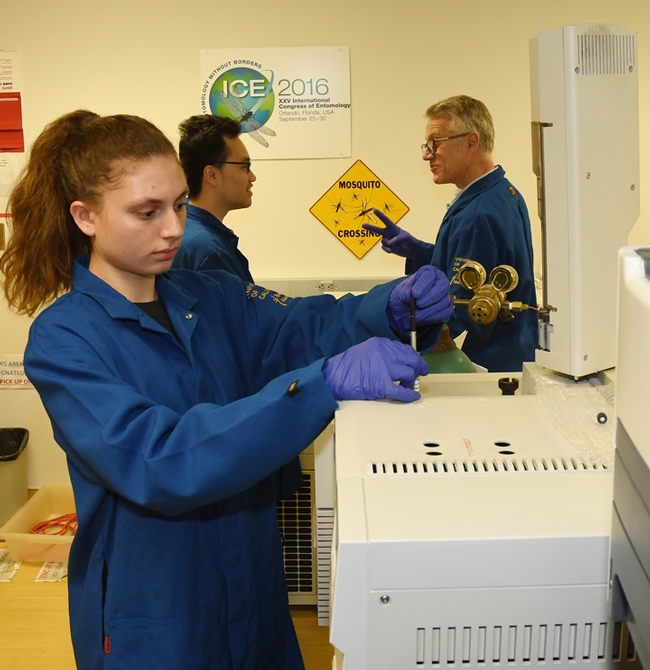 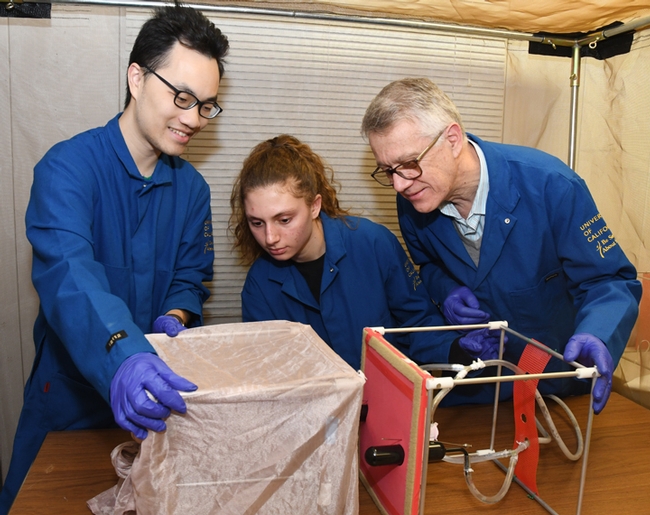 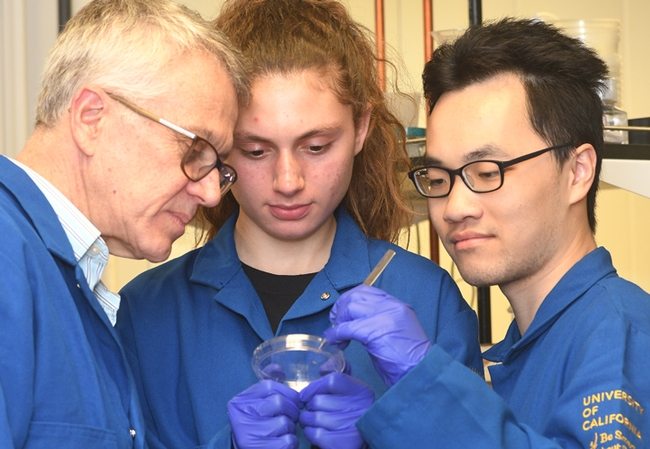 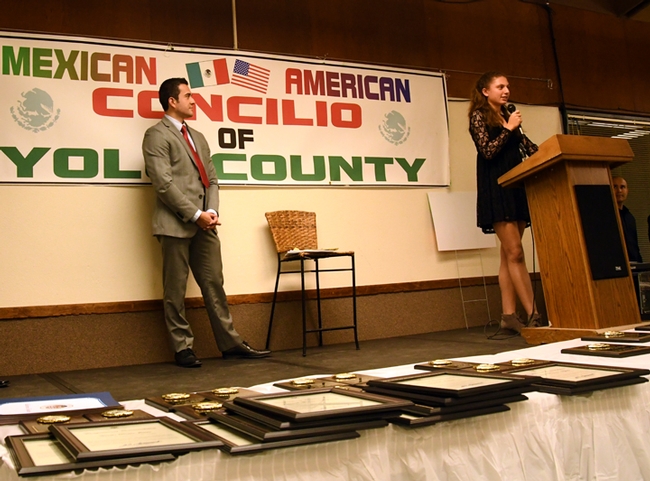