That's the consensus of the declining honey bee population in the United States.

A newly released poll showed that our nation's beekeepers  lost an average of 21 percent of their colonies last winter, as compared to 27 percent the winter before, according to the 11th annual survey conducted by the Bee Informed Partnership. They polled nearly 5000 beekeepers.

"We would, of course, all love it if the trend continues, but there are so many factors playing a role in colony health," bee expert Elina Lastro Niño of the UC Davis Department of Entomology and Nematology, told the Associated Press in a recent news story headlined “Survey Finds U.S. Honeybee Losses Improve from Horrible to Bad.”

Nino, who was not part of the survey, added “I am glad to see this, but wouldn't celebrate too much yet."

Survey director Dennis vanEngelsdorp. a University of Maryland apiculturist, told the Associated Press: "It's good news in that the numbers are down, but it's certainly not a good picture. It's gone from horrible to bad."

Indeed, the 10-year average for winter losses is 28.4 percent, and bee scientists want it down to at least 15 percent.

Eric Mussen, Extension apiculturist emeritus, who retired in 2014 after a 38-year career, has long pointed out the malnutrition issue is a major factor in the declining bee population.

"You, no doubt, have lost track of how many times I have stated that malnutrition is a leading factor in our unacceptable annual bee colony loss numbers," Mussen wrote in a 2013 bimonthly newsletter, from the UC Apiaries, located on the Department of Entomology and Nematology  website.  "I have also stated innummerable times that our synthesized bee diets just cannot match the value of nutrients obtained by bees from a mixture of quality pollens. My concern has been that although we have a very good idea of the protein requirements for honey bees, the rations of essential amino acids honey bees require, and their required vitamins and minerals, etc., we still cannot feed bees on our best diets and keep them alive more than two months in confinement."

Malnutrition is linked to a number of factors, including loss of habitat, but also climate change.

"As they investigate the factors behind the decline of bee populations, scientists are now eyeing a new culprit--soaring levels of carbon dioxide, which alter plant physiology and significantly reduce protein in important sources of pollen," wrote Lisa Palmer.

This is the gist of it: scientists headed over to the Smithsonian National Museum of Natural History to examine the pollen content of goldenrod specimens, dating back to 1842. Why goldenrod? It's a key food source for bees in the summer to late-fall bloomer when not much else is blooming.

They compared samples from 1842 to 2014, when atmospheric concentrations of carbon dioxide rose from about 280 parts per million to 398 pmm, and found the results quite troubling--a lot less protein in the pollen of newer specimens. In fact, the most recent pollen samples contained 30 percent less protein.  "The greatest drop in protein occurred from 1960 to 2014, when the amount of carbon dioxide in the atmosphere rose dramatically," Palmer wrote.

Noted entomologist May Berenbaum, professor of entomology and head of the Department of Entomology at the University of Illinois at Urbana-Champaign (she's now a past president of  the Entomological Society of America) was quoted in the article: "A declining quality of protein across the board almost assuredly is affecting bees. Like humans, good nutrition is essential for bee health by allowing them to fend off all kinds of health threats. Anything that indicates that the quality of their food is declining is worrisome."

So honey bees--which pollinate about one-third of the food we eat--are still in trouble.

And so, it appears, are we. 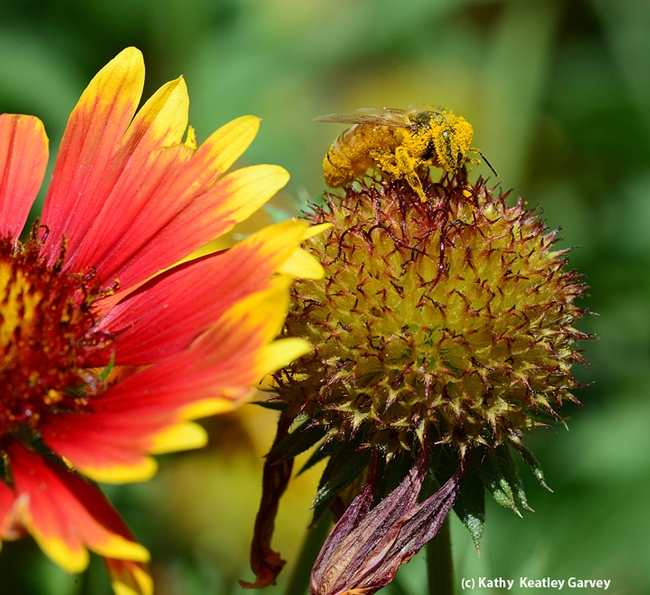